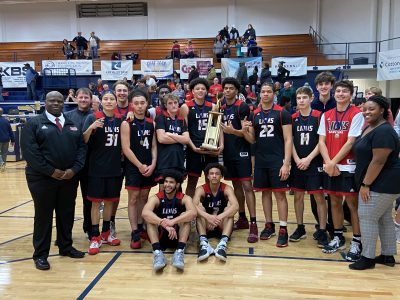 Topeka — Lawrence High in the Topeka Invitational final has become a tradition, with the Lions making the championship seven of the last eight years.

“Topeka’s got a great basketball community and that’s what makes this tournament so special,” LHS coach Mike Lewis said. “You can come over here and people care and they want to cheer on their teams and get rowdy.”

Being the defending champions — and coming off a convincing 74-56 win over Highland Park on Friday night — LHS had plenty of momentum heading into Saturday’s final.

The Lions (7-3) started out well enough with an early 5-1 lead, but a quick 8-0 run by Topeka West (6-3) abruptly swung momentum back in the other direction. While the LHS defense kept the Lions in it, the Lions’ offense proved to be the most troublesome.

Errant passes and shots not falling throughout the first half were an issue, and it’s tough when junior guard Zeke Mayo and senior forward Mayson Quartlebaum combine for 4 points in the first half.

“When things aren’t going your way, you need to step up and settle down and have good possessions on offense and work a little harder on defense,” Lewis said.

But that lead was short-lived as Topeka West came roaring back in the second quarter to take a 24-19 lead and continued to ramp up the already frenetic pace.

“I kept telling the guys, ‘You’ve got to settle down,'” Lewis said. “We were out of sync and we were overly emotional. We just weren’t quite ourselves.”

LHS bounced back and found some offense thanks to a 3-pointer from senior guard Peyton Mallory, a pull-up jumper from Valdez White (who led the Lions with 7 points in the first half) and 4 points off the bench from junior forward JaCorey Thompson.

And if it weren’t for a layup right at the end of the first half, LHS would’ve still had the lead. But Topeka West got a layup to go right before the buzzer from Marque Wilkerson to give the Chargers a 28-25 lead at halftime.

Lewis said he kept looking up at the scoreboard and reminding his team to stay in the moment, especially given the Lions were still within striking distance.

“We were playing like it was the fourth quarter and we were down 3 with 30 seconds,” Lewis said. “We were playing with that panicky style of play. We just needed to settle down.”

The third quarter was very much a tug of war, but outside shots started to fall from senior guards Willie Dotson, Ruben Littlehead and Quartlebaum. Defensively the Lions’ pressure was also causing all sorts of confusion in the Topeka West backcourt.

“Basketball’s a game of rhythm and momentum and you finally see a couple of those fall,” Lewis said. “Then you play a little bit harder on defense and maybe you get a steal. There’s a domino effect there. We were just scratching and clawing to get to that point.”

LHS led 41-38 at the end of the third quarter, overcoming a tough offensive night from Mayo and 17 turnovers.

“You finally get a bit of momentum and take the lead, you’re feeling good,” Lewis said. “I think our guys loosened up a little bit and were able to keep that lead. Our defense picked up, got some breakout baskets and had enough to win.”

The Lions really started to find themselves in the fourth quarter, capturing their largest lead of the night at 49-42, forcing a Topeka West timeout. Mayo also finally got a shot to go with a reverse layup midway through the fourth quarter.

The game was far from over, though, as a wild sequence occurred with just over a minute to go.

Mayo got the ball stolen from him and forced Mayo to foul Elijah Brooks. Brooks made the first free throw and missed the second, but Trevion Alexander made a layup off the rebound.

Later both Mayo and Dotson missed free throws. This led to a quick layup on the other end from Brooks, cutting the lead to 53-52 and setting up a crucial possession for LHS with 6.2 seconds left.

And while Quartlebaum missed a free throw, the Lions did what they had to do all game to win — just hang on.

“They came out and started to gamble and they had to get their foul count up,” Lewis said. “Then we missed three straight opportunities to basically earn 6 points, and basically you’re just trying to hang on.”

Winning in comeback fashion adds to the recent tradition of LHS succeeding in this tournament, and adds to the moment for Lewis and the Lions.

“It’s what it should be,” Lewis said. “It should be just a competitive game. When you’re Lawrence High School, you’re going to get everybody’s best shot, and our guys know that and we hung in there.”

LHS will next play at Wyandotte on Wednesday. Tipoff is set for 7 p.m.