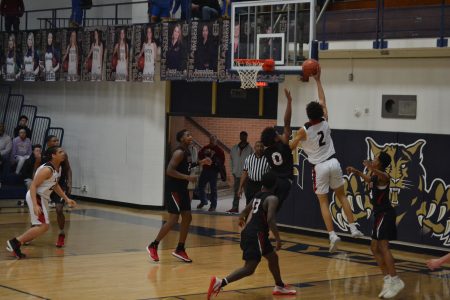 Lawrence High junior Zeke Mayo goes up for a layup during a game against Highland Park in the semifinals of the Topeka Invitational at Hayden High School on Jan. 24, 2020. The Lions are in the championship game for the seventh time in the last eight years of the event.

Topeka — Tipoff was moved up an hour due to a team in the consolation bracket being unable to travel. Then, there was a delay during warmups due to an official being late.

Yet none of that would prevent the Lawrence High boys basketball team from taking care of business against a ranked opponent in the semifinals of the Topeka Invitational on Friday at Hayden High School.

The Lions led from wire to wire in their eventual 74-56 win over Highland Park to return to the championship game after winning the whole event in 2019. It marks the seventh time in the last eight years that Lawrence has competed in the title game of the Topeka Invitational.

“They want to put our name on that trophy and continue that pride in being a champion,” LHS head coach Mike Lewis said. “I think they knew Highland Park would be a good opponent. Our guys wanted to come out and get after them and play hard.”

LHS has now won five games in a row in this event, dating back to last season. The Lions have won all five contests by double digits, posting an average margin of victory of 17.4 points in the process.

Despite all the scheduling adjustments, though, Lawrence (6-3) turned in one of its best performances of the year. And that was on display from the very beginning.

Highland Park (7-3, No. 7 in Class 5A) didn’t hit a shot until the 4:15 mark in the opening period. At the same time, LHS got good looks by attacking the rim in transition and working the ball inside in half-court situations.

The Lions led by as many as 10 in the opening period before claiming a 14-8 advantage at the end of the first quarter.

“We responded really well on both ends of the court,” junior guard Zeke Mayo said. “We picked up on defense, which hasn’t really been good from the start.”

CJ Powell, a 6-foot-7 junior, kept the Scots within striking distance early on, scoring 11 of his game-high 22 points in the first half. At one point, he flexed in celebration after netting a tough bucket inside to pull Highland Park within 6 at the 6:28 mark.

LHS responded with a quick 7-0 spurt, all of which came on layups. Mayo scored on a back-cut 18 seconds after Powell’s basket. Junior JaCorey Thompson then scored on an assist from senior Mayson Quartlebaum. Senior Peyton Mallory then registered a smooth layup in transition off an assist by Mayo, giving LHS a 23-10 advantage with 4:56 left in the first half.

The Lions, who have now won three games in a row, led by double digits for the rest of the night.

“I thought the guys played well,” Lewis said. “Good energy. Just diving for loose balls and playing hard. Probably, up to this point, maybe the best game in terms of flat-out energy and effort.”

Lawrence seemingly always had an answer for Highland Park, and that was a testament to the team’s balance on the offensive end. Eight different players scored for LHS in the win, including a double-digit performance by four different players.

Mayo paced the team with 20 points, most of which came on strong drives. Senior Valdez White poured in 9 of his 14 points in the fourth quarter. Mallory notched 12 points, while Quartlebaum finished with 10 points.

“We have matchups everywhere on the floor, anyone can guard anybody,” Mayo said. “On the offensive side, everybody can handle the rock. So we try to drive and shoot.”

Highland Park, meanwhile, only had five players score in the loss. Powell was held to just two shot attempts for the first 10 minutes of the second half, which helped Lawrence remove any doubt about the outcome.

Lawrence will face Topeka West in the championship game of the Topeka Invitational at 5:30 p.m. Saturday at Hayden. The Lions have won this event three times over the previous seven seasons, and finished as a runner-up on three different occasions as well.

“I think we are just hungry every year,” Mayo said. “We have that mindset that we are going to get it.”