With full squad, Lawrence boys cruise past Hayden in opening round of Topeka Invitational 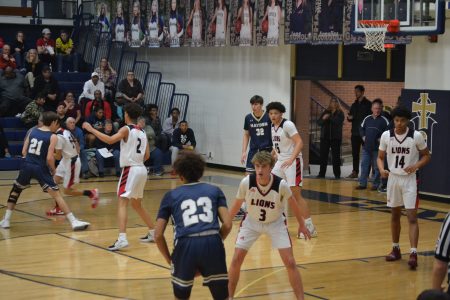 Lawrence High senior Peyton Mallory (3) guards the ball during a game against Hayden in the opening round of the Topeka Invitational on Thursday on Jan. 23, 2019.

Topeka — Lawrence High’s boys basketball team wasted no time in the opening round of the Topeka Invitational.

The Lions, who won this event with three double-digit victories in as many games last year, set the tone with a game-opening 9-0 run within the first four-plus minutes. Lawrence never looked back after that, cruising to a 62-46 victory over Hayden on Thursday at Hayden High School.

“If you don’t win the first one, you don’t get the chance to be in the championship,” senior Peyton Mallory said. “We want to do what we did last year, and that’s the goal for this year.”

On the surface, the 16-point win might be viewed as business as usual for the Lions, especially since they won by an average of 18 points per game during their run to the title in the Topeka Invitational last year.

But Thursday’s showing was significant since it was one of the first games this year that LHS has been fully healthy. Three Lawrence players — Mayson Quartlebaum, Zeke Mayo and Valdez White — suffered injuries in the team’s win over Olathe Northwest just nine days ago.

Everybody was back in action against Hayden (3-6), and the impact was evident. LHS (5-3) played as many as 10 guys and led by at least 15 points for much of the final 20 minutes of the contest.

“We haven’t really had a game yet this year where we had our full squad,” Mallory said. “We just got in the swing of things. We really felt like we used to before all the injuries happened.”

The Lions removed any doubt about the outcome from the start, too. Thanks to a stingy defense and an aggressive mindset in transition, Lawrence scored the first 9 points of the game. Mayo, Bryce Johnson and Ruben Littlehead all got LHS on the scoreboard with early fast-break opportunities.

The Wildcats coughed up seven turnovers in the first period alone against the Lions’ full-court pressure defense. Johnson banked in a 3-pointer for the team’s lone perimeter basket, as LHS claimed a 16-6 advantage after one quarter.

“We just came out and had a good flow,” LHS head coach Mike Lewis said. “Our guys shared it well. We had some good breakout baskets. We had a little bit of everything. We shot it well outside and got to the rim. It was just a good balance.”

LHS then started hitting shots from deep to blow the game open in the second quarter. Mayo and Mallory both drilled a pair of triples in the second period. Willie Dotson, who was sidelined with an injury to start the season, also hit a 3-pointer.

“We shot it well, but I thought we shared it well,” Lewis said. “We just had a good feel about everybody on the floor. Everybody contributed — it was that type of night.”

Lawrence will face Highland Park (7-2, No. 7 in Class 5A) in the semifinals of the Topeka Invitational at 6 p.m. Friday.