With new form, Wheeler Battaglia-Davis comes through in clutch moment for LHS bowling 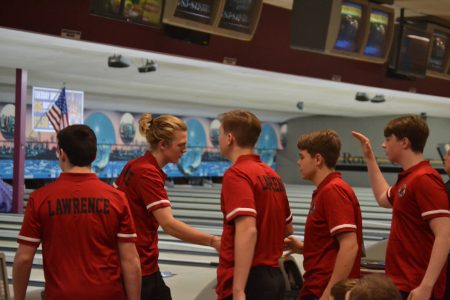 Lawrence High junior Wheeler Battaglia-Davis is congratulated by his teammates during a meet Friday at Royal Crest Lanes on Jan. 10, 2020.

Lawrence High junior Wheeler Battaglia-Davis didn’t even know the score when he did the improbable.

In the semifinals of match play, the Lions needed a miracle late in game one against Topeka Seaman to even have a shot at advancing to the championship game of the Free State Invitational on Friday at Royal Crest Lanes. And they received their wish thanks to the clutch performance by Battaglia-Davis.

Battaglia-Davis recorded three consecutive strikes on as many throws in the 10th frame. Lawrence needed all three strikes in its 202-200 win over Seaman during game one. It wasn’t until after the third strike that Battaglia-Davis fully understood what just happened.

“I didn’t even realize up until that 10th frame that it was so close,” Battaglia-Davis said. “After that last strike, I just turned around and I was amazed. I didn’t know that we won by 2 points.”

Several voices told Battaglia-Davis congratulations immediately afterward, though a comment from freshman Remy Fowler stood out and perfectly illustrated the magnitude of that moment.

“(He) was like, ‘My legs are shaking and I wasn’t even bowling,” Battaglia-Davis said. “It was amazing. We got up, we all yelled and we all freaked out.”

Seaman ultimately won the next two games before falling to Washburn Rural in the championship match. Free State, the host of the 19-team tournament, lost to WRHS in the other semifinal matchup.

But Battaglia-Davis’ heroics as an anchor demonstrated the growth that he has made in just his second year in the sport. For one, Battaglia-Davis was unleashing all those strikes with a new form. He’s now bowling with two hands, as opposed to one like he did for most of last year.

“I changed it because one of my friends was doing it and he was doing very well,” Battaglia-Davis said. “I was doing well one-handed, I was hitting a bunch of spares but I couldn’t get strikes nearly as well. That’s really changed my game.”

Battaglia-Davis actually started working on the new form during his time as an alternate at a varsity meet last year. He was in the other lane working on his new bowling style, though it didn’t immediately pay dividends during his sophomore season.

Throughout the offseason, Battaglia-Davis perfected his craft even more by spending a lot of time in the bowling alley. So for Battaglia-Davis, it was satisfying to see it all come to fruition in just his first meet of the 2020 season.

“I’ve improved a lot,” Battaglia-Davis said. “I switched some things up and I bowled a ton in the offseason. I came back a completely different player at this point.”

The Lions, who were the sixth seed, needed to play well during the Baker games portion of the meet to even get into match play. They then bested second-seeded Mill Valley in the opening round with wins in the first and final set.

The Firebirds, meanwhile, also had their moments before losing to Washburn Rural in two games during the semifinals. Free State boys actually netted first in the junior varsity competition as the No. 1 overall seed.

At the varsity level, FSHS was the fifth seed and knocked off No. 4 Shawnee Heights in the first round of match play. The Firebirds won both games (224-161, 194-158) before falling to the Junior Blues in the next round.

“I’m happy with how the team did today,” Neidow said. “We did really well only coming in with two practices. It feels good.”

It was a strong ending to a two-day event at Royal Crest Lanes. The girls competed in the 19-team meet on Thursday.

Lawrence High placed second in the varsity competition, led by a first-place finish from senior Emilie Rodman. She finished with a series score of 626, lifting the Lawrence girls all the way to the championship game of match play before falling to Shawnee Mission Northwest.

Free State, which did not make it to match play, placed 12th as a team out of 19 squads. Freshman Kaitlyn Harrington led FSHS with a series score of 502 in her first meet, which was good enough for 23rd among individuals bowlers.

LHS will now host a triangular at 3 p.m. Wednesday at Royal Crest Lanes. Free State will travel to Mission Bowl in Olathe at 3:30 p.m. Wednesday.