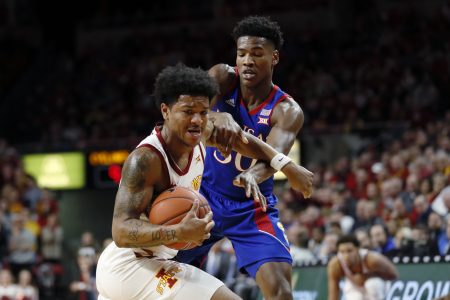 It wasn’t a typical Kansas-Iowa State matchup in Ames, Iowa.

After years of tightly-contested battles between Big 12 foes, the first such matchup of the new decade was anything but that. No. 3 Kansas overwhelmed Iowa State from start to finish in its 79-53 win Wednesday night in Hilton Coliseum.

At least early on, the two teams went back-and-forth and the score was tied at 17-17 at the 13:33 mark. Kansas center Udoka Azubuike then gifted the Jayhawks a lead that they wouldn’t relinquish with a slam off an assist by David McCormack.

This is a beautiful pass from Udoka Azubuike to David McCormack for the alley oop. Good aerial look at it too. #kubball pic.twitter.com/2hTAyavobR

Kansas, which never trailed at any point in its first conference game away from home, proceeded to close the first half on a 21-3 run to take a 46-26 advantage by intermission. And the game was really never in doubt after that.

Junior Marcus Garrett tweaked his ankle in the first half, but ultimately returned to action.