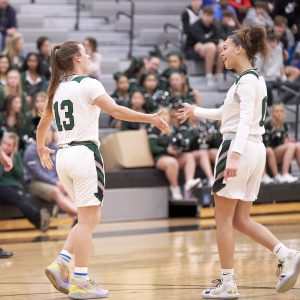 Free State’s girls basketball team made enough plays when it mattered most. And the Firebirds discovered a little bit about themselves in the process.

After going back-and-forth with Shawnee Mission South through three quarters, FSHS pulled away in convincing fashion in the final period. The Firebirds allowed just one successful field goal in the final quarter, which led to a 20-6 advantage over the final eight minutes.

It proved to be more than enough for Free State to claim a 52-35 win over Shawnee Mission South during its home opener Tuesday night at FSHS.

“It was really fun to finally play at home in front of our fans, family and friends,” FSHS head coach Nick Wood said. “We talked about this was our first opportunity to get out on our homecourt and establish an identity for who we are going to be.”

With the win, the Firebirds (4-3, 1-1 Sunflower League) have now won two games in a row to start the 2020 portion of their schedule. It is their first such win streak in Wood’s first season at the helm.

But the seeds of the strong finish were really planted in the third quarter. Senior guard Caely Kesten, a Northwest Missouri State signee, was sidelined with foul trouble for five minutes during the third period. It came just three days after Kesten scored 22 points to lead Free State past Lansing.

Although the Raiders (0-6, 0-2) scored the first 7 points with Kesten on the bench, the Firebirds found a way to make plays without her on the floor. Senior forward Nysha McVay scored with 2:21 left, giving Free State a lead it wouldn’t relinquish. Junior guard Evy Harrell also notched a bucket to help FSHS take a 32-29 advantage entering the fourth quarter.

“It wasn’t great that she had three fouls,” Wood said. “It was great to see how we reacted to that, and she still stayed in the game mentally. That provided the opportunity for other girls to step up, and we need that. It takes all of us to be successful.”

The Firebirds then closed things out in an emphatic way. Junior Shannon Clarke, who paced the team with 20 points, hit one of her four 3-pointers to open the fourth period. Senior Joy Nunoo added a basket one minute later, and the flood gates opened after that.

Many players were responsible for Free State pulling away late, too. Junior Daeci Jaillite-Walker, Harrell, Clarke, Kesten, Nunoo and McVay all contributed to Free State’s 20-point effort in the fourth period.

In addition, Free State had a strong showing as a team on the defensive end. Shawnee Mission South missed all but one of its 12 attempts from the floor in the fourth period.

“They battled pretty hard,” Wood said. “We talked before the game about it being 32 minutes, and our depth is going to overtake who they are. It was great to see us make those effort plays that allowed us to win the basketball game.”

The strong finish was necessary after a first half that featured both teams trading baskets.

Neither team led by more than 4 in the first half, though the Firebirds managed to go into the intermission with some momentum. Clarke collected a rebound off a missed free throw with eight seconds remaining, and immediately headed to the other end.

Clarke faked left before launching a pass to the right corner, where Kesten caught it and fired a 3-pointer in stride. She drilled the 3-pointer at the buzzer to break the tie, giving Free State a 25-22 lead at halftime.

Kesten ultimately finished with 11 points, while Harrell recorded 10 points to join Clarke in double figures. Clarke went 5 for 12 from the floor, including 4 of 7 from long range. Harrell was 5 of 10 on the night and Kesten went 4 for 9 in the win.

“We have to have a tough mindset,” Wood said. “I feel like we are starting to figure out who we are and who we can be to be successful.”

Free State will play host to Gardner-Edgerton at 5:30 p.m. Friday.