Thanks to some key plays down the stretch, the Lawrence High boys basketball team secured a 50-42 win over Free State Friday night in Allen Fieldhouse. The players eventually celebrated with the student section after another thrilling City Showdown.

Lawrence (15-3, 9-1 Sunflower League) has now won 12 games in a row entering the final week of the regular season, but its latest victory was extra special.

“It means a lot,” LHS head coach Mike Lewis said. “We try to downplay it, and we all know it’s a big game. Just a good night to be a Lion.”

This crosstown clash meant more given how much was at stake. LHS, which won the league title last year, is now all alone in first place in the Sunflower League standings. Free State (13-5, 8-2 Sunflower League) now can only wait for a misstep in the final week of the regular season.

“We had to get a win; it actually mattered,” LHS senior Bryce Johnson said. “Last year, and the year before that, it didn’t really matter. But we were so close together in the rankings.”

Most of all, though, Lawrence’s win was unlike any other as of late. Through the first 11 games of the win streak, LHS was winning by an average margin of 18.4 points per game. The Lions won nine of those contests by at least 14 points behind their high-octane offense.

Friday’s win was gritty and a credit to Lawrence’s effort on the defensive end. It was the style that Free State usually plays with, but LHS made a number of key stops down the stretch to pull away in the fourth quarter.

FSHS went 1-for-13 from the floor in the final period, despite trailing by just 4 points entering the final frame. Sophomore point guard Mozae Downing-Rivers fouled out with 5:33 remaining in the contest.

“I’m proud of our guys,” FSHS head coach Sam Stroh said. “We will learn from it. LHS is a good team, there is a reason why they have won 11 in a row. There is nothing to (hang) your head about.” 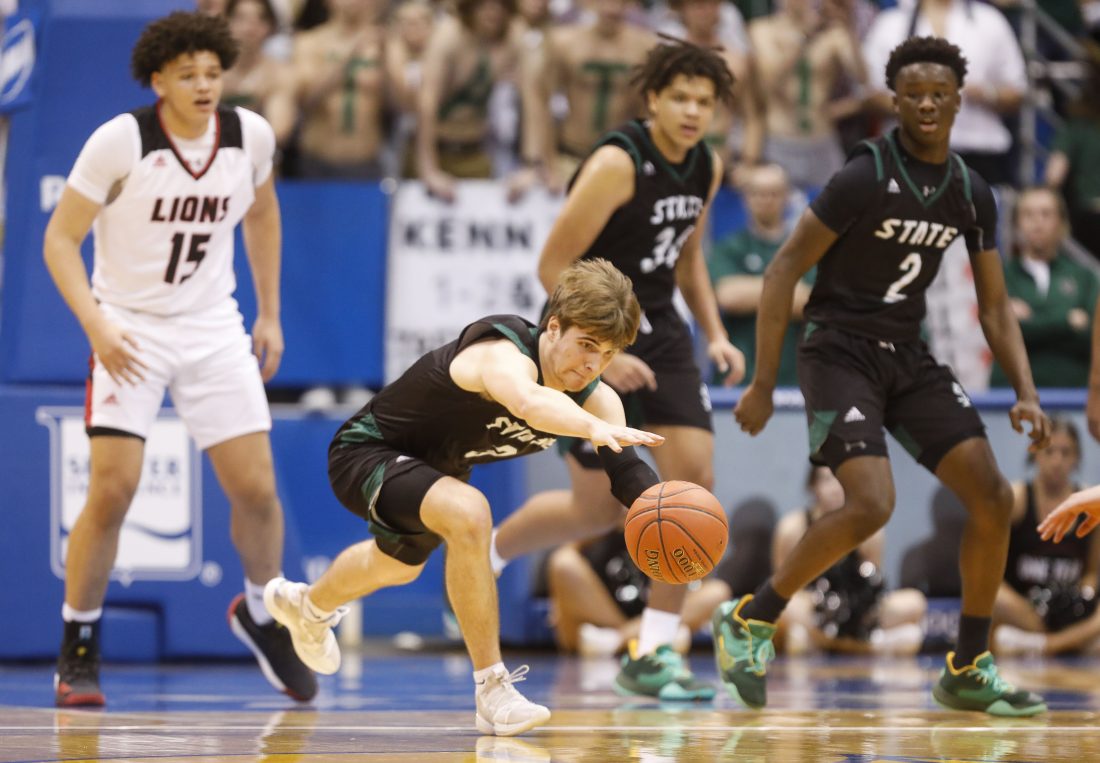 Free State’s Ethan Lincoln lunges for a loose ball during the first half on Friday, Feb. 21, 2020 at Allen Fieldhouse.

Lawrence junior guard Zeke Mayo, who has fueled this high-powered offense all year, took a hard fall with 2:47 left in the contest. Mayo eventually had his ankle taped up on the bench, but did not return to the game.

But it didn’t take long to realize that it was going to be a back-and-forth battle on Friday. The first quarter belonged to the Lions, though not quite as convincingly as last year’s rivalry matchup.

After being buried by a 17-2 hole in last year’s 71-55 loss at LHS, Free State came out with a game plan in the opening period this time around. The Firebirds were patient on offense, while trying to contain Mayo by face-guarding him.

It worked, as junior Andrew Piper gifted FSHS a 2-0 advantage on the opening possession of the game. He drilled a midrange jumper after a 30-second offensive trip, where Free State passed the ball around before finding the open man.

“I thought our start was fine,” Stroh said. “Everyone is nervous, including them. I thought we chipped away. We just could never get over the hump.”

With Downing-Rivers face-guarding Mayo, it forced other Lawrence players to make a basket. The Lions did just that, going on a 7-0 spurt off buckets by Johnson, Peyton Mallory (3-pointer) and Ruben Littlehead.

Other Free State players took their turn guarding Mayo, who eventually got free to help Lawrence take control. He scored 8 points over the final three-plus minutes of the first quarter, with the signature blow taking place at the buzzer.

Mayo slowly dribbled the ball up the court with Free State junior Kris Daniels defending him in the waning moments of the first quarter. Mayo then pulled up from the Jayhawk logo, which was several feet behind even the new collegiate 3-point line, and splashed a triple as time expired.

Mayo turned and made a motion toward the LHS student section, as Lawrence grabbed a 17-12 advantage at the end of the first frame.

“Those are those shots when they go in, it is great,” Lewis said. “When you miss, you go, ‘Eh, maybe we need to get a little bit closer.'”

Free State didn’t back down, however, and answered right back in the early part of the second quarter. Senior Olin Yoder buried a triple from the top of the key off an assist by Downing-Rivers.

Moments later, junior forward Miles Branch evened the score at 20-all with a free throw at the 4:15 mark in the second quarter. Mallory responded immediately with a 3-pointer, and the Lions eventually held a 27-23 advantage at the intermission. 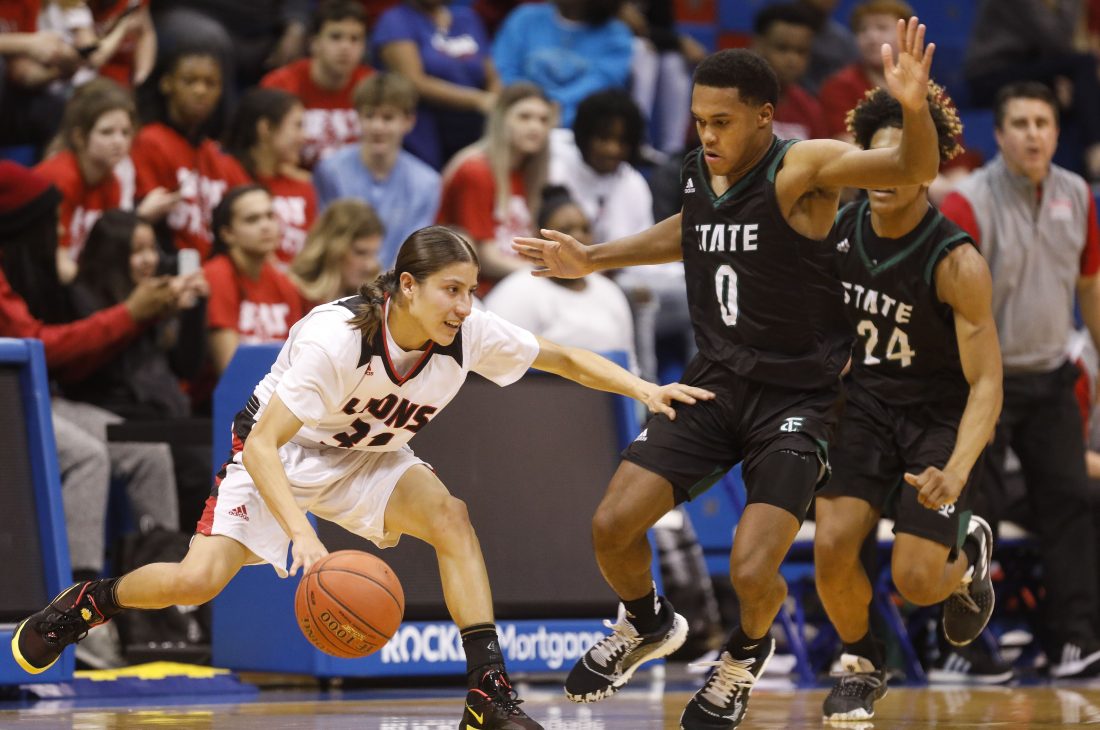 Lawrence High’s Ruben Littlehead drives against Free State’s Kris Daniels during the second half on Friday, Feb. 21, 2020 at Allen Fieldhouse.

The third quarter was a defensive battle. Johnson scored the first basket of the third period at the 5:25 mark, but neither team was able to create much of a cushion. Free State sophomore Dash Hawkins connected on a 3-pointer, while Lawrence High senior Mayson Quartlebaum recorded a basket and delivered a key block.

The Lions took a 35-31 lead into the fourth quarter, which is where they made enough plays to come away with another win.

“I thought all of our guys played well under the conditions,” Lewis said. “It was kind of a bruiser-type of game for a few minutes, and I thought our guys handled that well too.”

Each team had two players finish in double figures on the night. Branch scored 12 points, while senior DK Middleton finished with 11 points for the Firebirds. For the Lions, Johnson tallied 12 points and Mayo posted 11 points.