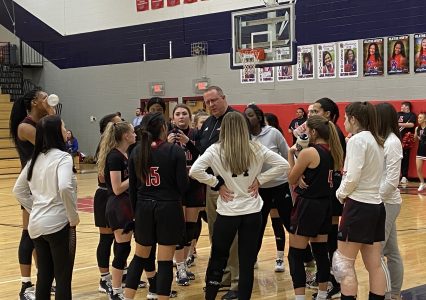 LHS coach Jeff Dickson talks to his team during a timeout. LHS fell to Olathe North 73-53 on Tuesday, Feb. 18.

Olathe — Despite handling the pressure early on, Lawrence High struggled to withstand the relentless Olathe North defense, as the Lions fell to the Eagles 73-53 Tuesday night.

The Lions (5-12, 1-8 Sunflower League) started out strong, though, as LHS made a habit of pushing the ball inside to junior forward Ozi Ajekwu. That’s something coach Jeff Dickson has been emphasizing the entire season, and it was a sound strategy in the first quarter.

Ajekwu scored 9 points in the first quarter, cleaning up the glass for multiple second-chance opportunities. And against the defensive pressure from Olathe North (11-5, 7-2 Sunflower League), Ajekwu served as the go-to safety option for the Lions if need-be.

Ajekwu finished with a team-high 21 points.

“I thought she was one of the best players on the floor tonight against one of the best teams in the state,” Dickson said. “And I still want to give her the ball even more. She kept us in the game early-on and I couldn’t be more proud of her.”

Freshman guard Amaya Marshall and sophomore guard Layla Harjo added a pair of 3-pointers to help Ajekwu and push the Lions to a 20-19 lead at the end of the first quarter.

One glaring issue in the first quarter for the Lions was turnovers, as LHS committed seven.

That ball-handling issue recurred in the second quarter, as Dickson was forced to call a timeout just 22 seconds in with Harjo trapped in the backcourt.

The Lions battled to a 24-24 tie until the Eagles went on a run to end the half. Marshall added another 3 to keep LHS afloat, but steals and a 3-pointer at the buzzer from senior guard Sania Copeland gave Olathe North a 37-29 lead at halftime.

LHS cut the lead to 39-34, but Olathe North stifled the comeback by relying on its defense once again. The Eagles forced more turnovers and extended the lead to 50-34.

“I think as we got mentally tired, we started getting a little sloppy and then they feed off of that stuff,” Dickson said. That is an extremely well-coached, talented team, and we had to play close to perfect to be able to (beat them).

“And they did a really good job of pulling (the pressure) off, then we’d kind of relax, and they’d throw it on and we weren’t quite ready for it.”

A key reason for that pressure was the play of Olathe North sophomore guard Saniya Simmons, who grabbed multiple steals that led to transition opportunities for the Eagles.

“She’s the best defensive guard we’ve seen all year,” Dickson said. “She almost single-handedly put a number on our guards tonight. We shouldn’t hang our heads at all tonight, because she’s a stud.”

With just over two minutes left in the third quarter, Ajekwu scored on a layup and freshman guard Hailey Ramirez added a floater. But the Eagles still led 52-38 at the end of the third quarter.

And despite another strong quarter from Ajekwu, Copeland and Olathe North took control of the fourth quarter. Copeland scored 12 points in the quarter, and the Eagles rolled to victory.

Dickson said some of his younger players looked “a little intimidated,” but he was proud of how the Lions fought against the Eagles.

“I liked the fact that we battled all the way to the end; I thought we did it the right way,” Dickson said. “I think we got a lot of growth tonight against a really good team on the road and we’ll try to build on that going into Friday.”

LHS will next face Free State in the City Showdown at Allen Fieldhouse on Friday. Tipoff is set for 6:30 p.m.