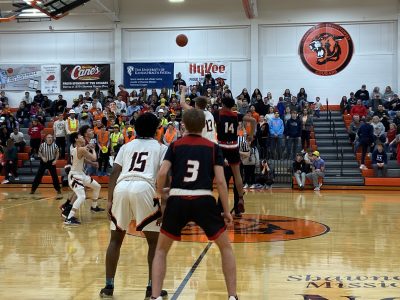 Shawnee — Lawrence High played with electric energy throughout the night, controlling the game from the opening tip, in a 69-40 road victory over Shawnee Mission Northwest on Friday night. This extends the Lions’ winning streak to eight.

LHS coach Mike Lewis said his team played with great pace and energy on both ends of the floor.

“And you get on a roll and good teams try to get that momentum as long as they can,” Lewis said. “Your opponent tries to take that momentum away. They fought, but we had a little bit more.”

One particular instance was midway through the fourth quarter, when LHS junior guard Zeke Mayo found his teammate senior forward Mayson Quartlebaum sprinting toward the basket. Mayo hesitated, but quickly lobbed it to Quartlebaum for the emphatic alley-oop.

“Honestly, I wasn’t going to throw it because I didn’t think I was going to make a good toss to him,” Mayo said. “But I just let it fly, we were up big so I risked it, and it was a good outcome.”

It was a group effort, which has been a pivotal reason why LHS (11-3, 5-1 Sunflower League) has been playing so well as of late and is currently No. 10 in Class 6A.

On Friday, the Lions wasted no time getting on the board, as LHS won the opening tip and junior forward Bryce Johnson got an early layup to go. This started a 9-2 run for the Lions.

“Honestly, (a good start) is everything for us,” Mayo said. “When we have energy coming out like that in the first quarter and a big lead early, that impacts the game for us on both ends of the floor.”

SM Northwest bounced back, though, as Cougars star sophomore guard Damar’e Smith made a pair of jumpers. Smith has been a standout player for the Cougars all season — he finished with a team-high 12 points — and was a focal point of the Lions’ defense Friday.

“He’s a one-on-one player,” Mayo said of Smith. “Our focus is never to let one player beat us, and I think we did that tonight.”

But once again, LHS took control with another 9-0 run to end the first quarter. Mayo hitting a 3-pointer, Quartlebaum got a reverse layup and Johnson added a pull-up jumper and dunk in transition.

And even though Smith hit an early 3 in the second quarter, it was still the Lions who were in full control. LHS went on a 15-5 run and later jumped out to a 33-14 lead behind 3-pointers from senior guards Peyton Mallory, Valdez White and Willie Dotson.

The Cougars added a late free throw, so the Lions took a commanding 33-15 lead going into halftime.

Outside of another deep 3-pointer from Mayo, the early part of the third quarter was pretty quiet for both sides. Much of that was due to the physicality in the paint, with nearly every rebound contested by two or three players.

“The physicality in the third quarter — you could feel that from them that they wanted to come out and be just a little bit more aggressive,” Lewis said. “(They wanted to) try to turn us up and what I call ‘be the aggressor’ and put us back on our heels.”

Mayo led the way with 7 points in the third quarter. Even though it wasn’t the most efficient quarter for LHS, the Lions still led 45-25.

But as the fourth quarter started, SM Northwest senior guard Logan Skeens finally got a 3-pointer to fall and junior forward Ty Blecha scored a layup. LHS called a timeout to regroup.

“We were lethargic and gave away two straight possessions there with just bad defense,” Lewis said. “And I could see it on our guys that they just weren’t engaged. So it was our opportunity to use one (timeout) quick and say, ‘Here’s the deal: let’s guard, let’s be who we are, let’s get going.'”

Lions senior guard Ruben Littlehead responded out of the timeout with a corner 3-pointer, and later connected with Quartlebaum for a dunk in transition. Quartlebaum followed that up with another block on the defensive end.

However, the Lions quickly put an exclamation point on the win. Mayo, Quartlebaum and Johnson each had a highlight-reel dunk of their own, capping off the night with the electricity that they started with.

“Oh we’re playing with a lot of fun,” Mayo said. “Everybody’s playing their role; they know what they need to do. We’re moving the ball like crazy and we’re getting good buckets, so that’s big for us.”

The Lions can now look forward to playing a home game next week for the first time since Jan. 14 against Olathe Northwest — eight games ago.

“I think it’s big for us and it’s big for our city, honestly,” Mayo said. “I think they’ve been waiting pretty long for us to play at home. Hopefully it will be a solid crowd out there, but we’ll see.”

Next up, LHS will host Shawnee Mission East at 7 p.m. Tuesday.