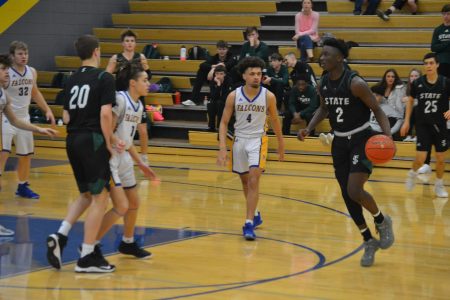 Free State sophomore point guard Mozae Downing makes a move past a defender during a game against Olathe South on Friday night at OSHS on Feb. 7, 2020.

Coming off a 66-45 loss to Olathe East, the Firebirds got back to their old ways with a fitting overtime win. Thanks to timely shots and strong performance on the defensive end, Free State earned a 52-46 victory over Olathe South at Olathe South High School.

The Firebirds improved to 10-4 on the year, including 5-1 in Sunflower League action.

“We just had a wakeup call,” FSHS head coach Sam Stroh said. “Tonight wasn’t pretty, but a good road win in the league. We will take it.”

That response was evident in the Firebirds’ performance from the start, as they jumped out to a 12-2 advantage in the first quarter. DK Middleton, Ethan Lincoln, Andrew Piper, Kris Daniels and Mozae Downing all contributed to Free State’s double-digit lead out of the gate.

But, of course, things got more interesting down the stretch. It began when Olathe South (10-5, 3-4 Sunflower League) went on a run in the second quarter, trimming it to a one-possession game at the intermission. The Falcons eventually jumped out in front in the second half, setting things up for a thrilling finish.

After a back-and-forth final quarter, Free State (No. 5 in Class 6A) led by as many as 6 with 5:33 left to play. Olin Yoder nailed a pair of crucial 3-pointers, and Lincoln connected on a triple from the top of the key. Olathe South (No. 9 in Class 6A) answered with an 8-0 run, and eventually evened things up at 42-all in the final moments of regulation.

“I thought we got a little bit rattled,” Stroh said. “But when we got down a couple times, I thought our seniors stepped up.

Following a successful free throw by the hosts with 1:24 left to play, Free State elected to hold for the last shot. There were two timeouts over that stretch, including a full timeout by the visitors with 4.4 seconds remaining.

The play ended with a strong left-handed drive by Middleton, who missed the layup attempt. Piper then converted on the putback, but the official waved off the basket on a bang-bang play at the buzzer.

“I wasn’t able to see the tip-in; I was blocked by one of our assistant coaches,” Stroh said. “I was just proud of kids. A league win on the road is always important, especially after we lost our first league game the way we did.”

Free State didn’t take any chances in overtime, however. Middleton came through with an and-one sequence on the first possession of the free period, and Free State held on for the remainder of the night.

Downing drilled five of his six attempts from the charity stripe, while Daniels went 2-for-2 at the free-throw line to help the Firebirds prevail in the end. Middleton ended up leading Free State with 11 points on 5-of-9 shooting, while Downing joined him in double figures with 10 points.

“We are still figuring some things out in terms of offense,” Stroh said. “The defense was the most important thing. We defended better, and we rebounded better. We made free throws when we needed to. I was proud of our kids.”