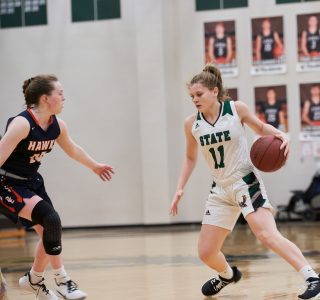 A tough night on offense and a slow start led the Free State girls basketball team to a 50-40 loss to Olathe East Tuesday night.

Free State coach Nick Wood said the Firebirds’ mindset wasn’t where it needed to be at tip-off, something he takes responsibility for.

Initially, Free State (6-7, 1-4 Sunflower League) got off on the right foot as senior guard Joy Nunoo grabbed the opening tip-off and got a layup to go. That lead vanished quickly, though, as Olathe East (10-4, No. 7 Class 6A) responded with a 10-0 run.

The Hawks took a 10-4 lead at the end of the first quarter as junior guard Evy Harrell ended the run with two free throws.

But the momentum stayed with Olathe East as the Hawks went on a 14-4 run to start the second quarter. The Hawks’ largest lead of the half came midway through the quarter at 26-8, but the Firebirds managed to cut that down to 26-13 by halftime.

“We struggled to do what makes us really good,” Wood said. “When we don’t play that way, our margin of error is small, especially against really good teams.”

On top of that, senior guard Caely Kesten and junior guard Shannon Clarke were held to just five points in the first half.

For Wood and his players, there was some lingering disappointment from shots not falling, especially coming off Free State’s recent win over Derby.

“When things aren’t going as well as we want them to, it’s hard because we want to hold ourselves to a high standard,” Wood said. “It’s hard when you put the work and time into what we do and we don’t go out there and see the results.”

The Firebirds turned the corner at the start of the third quarter, as Free State cut the lead to 31-20 with a pair of 3-pointers from Kesten. However, Olathe East once again responded with a 9-2 run to take a 40-22 lead at the end of the third quarter.

Free State fired back in the fourth quarter as the Firebirds went on a 10-4 run. Granted, there was still work to be done, but Free State trailed 44-32 with three minutes to play.

“We played to our identity,” Wood said of his team’s play in the second half. “We’re good when we’re getting in transition, getting up the floor and we’re playing together. Unfortunately in the first half we didn’t do that.

“And against a really good team like that, you can’t wait for 16 minutes (left) to figure that out. You’ve got to be ready to go from the beginning.”

Even though the Firebirds cut the lead to 50-40, there wasn’t enough time left, and the comeback fell short.

After playing four straight games against ranked opponents — Schlagle (No. 10 Class 5A), Derby (No. 5 Class 6A), Topeka High (No. 1 Class 6A) and Olathe East — Free State has been tested frequently as of late.

“But that’s why you go to Free State,” Wood said. “You play a really good schedule and you play against really good teams. It’s challenging, but that’s how we want to do it and that’s how you get better.”

Free State will next play at Olathe South on Friday. Tip-off is set for 5:30 p.m.