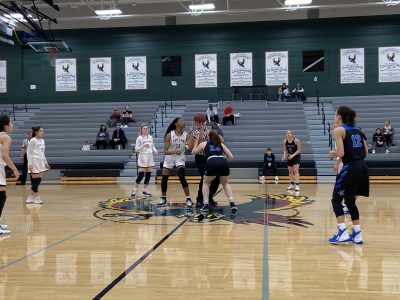 Even with fatigue settling in early, Lawrence High came alive in the second half to snatch a 52-45 victory over Junction City on the final day of the Lady Firebirds Winter Classic. Junior forward Ozi Ajekwu led the Lions to a seventh place finish with a game-high 24 points.

“I think staying positive and taking shots with confidence instead of taking shots that were rushed made a difference,” LHS coach Jeff Dickson said. “We smelled a little blood in the water, which got our kids fired up in the third game in three days, which was encouraging to see.”

Dickson has said in the past Ajekwu is one of the best post players in the state, and she was a reliable option once again for the Lions (5-7).

“That just means a lot because my teammates were looking out for me and they were getting me the ball,” Ajekwu said. “And we were just moving (the ball) around really well.”

One of the issues for Ajekwu was the physicality inside from Junction City (0-12), which confused Ajekwu at times and forced her to miss some shots.

“(Later in the game) she was able to get in a rhythm,” Dickson said. “And when she’s (playing) like that, we’re going to be pretty good.”

And Ajekwu found that rhythm after readjusting her mentality.

“In the moment, I was just like, ‘I have to do this. This is my moment right now,'” Ajekwu said. “I’m not only playing for myself, but my whole team and my family and everything.”

Both teams got off to a bit of a slow start, with the first field goal coming at the 5:02 mark of the first quarter. That layup from Junction City senior forward Savannah Adams opened things up for both sides as it was quickly followed by a layup from Ajekwu.

Ajekwu provided most of the offense for the Lions with a team-high 10 points in the first half.

LHS even took a brief 8-7 lead with just over two minutes left in the first quarter, but Junction City senior guard Alyssa Grygier hit a late 3-pointer to give the Blue Jays a 12-8 lead.

The second quarter was much like the first with both teams struggling on offense. Part of it was shot selection and part was turnovers; both LHS and Junction City committed 11 turnovers. Ajekwu scored an early layup, which was followed by another scoring drought.

But once again, the latter half of the quarter provided more offense. Blue Jays senior guard Andrea Davis hit a corner 3-pointer with 1:07 left, which was followed by another Ajekwu layup and free throws from sophomore guard Layla Harjo and senior forward Paiden Bell.

After the dust settled, Junction City held a narrow 18-15 lead over LHS at halftime.

If anything, Dickson said that slow start comes from the rigorous task of playing three games in three days.

“You’ve got two teams that played an extremely tough schedule in the tournament,” Dickson said. “Being lower seeds, we’ve had to play the best of the best.”

The Lions broke the game open in the third quarter, jumping back into the lead after a corner 3-pointer from freshman guard Hailey Ramirez and a layup from Ajekwu.

Once again, the Blue Jays responded with a couple of layups of their own, but a frenzy at the end of the quarter fully turned the momentum over to LHS.

In the final minute, freshman guard Amaya Marshall hit a 3, which was followed almost immediately by a layup from Harjo off a Blue Jays turnover. Shortly after, Ramirez hit a 3-pointer to give LHS a 33-25 lead.

“We stayed a lot more positive; I didn’t see people hanging their heads,” Dickson said. “We hit that run, which was huge. We haven’t had a sequence like that in a while.”

And after a quick layup from Ajekwu and senior guard Ella Stewart banking in a 3, the Lions rattled off a 14-0 run. The Lions even stretched out the lead to 45-30 midway through the quarter.

Junction City wasn’t quite done, though, as the Blue Jays went on a 12-3 run late in the fourth quarter to cut the lead to 48-42 with less than a minute left.

“It’s a good thing we (had that run), because being as charitable as we are, we tried to let them come back into it,” Dickson said. “But it was enough to put us over the edge and give the kids a good feeling for the rest of the weekend.”

LHS managed to hit enough free throws to stretch the lead back to double digits and hold on for the win.

Dickson said being in that situation to hit late free throws — something that has hurt the Lions earlier this season — will be fruitful in the long run.

“But in the grand scheme of what we’re trying to do, that’s not bad that that happened because it gives us some stuff to look at,” Dickson said. “So to be able actually knock those free throws down was huge for us and gave us a big boost.”

The Lions will next play Olathe South on Tuesday. Tipoff is set for 5:30 p.m.