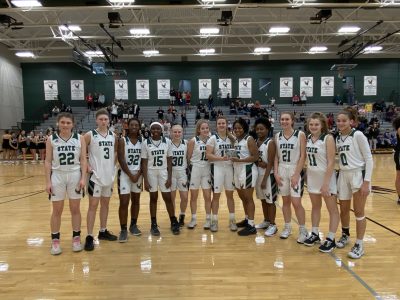 There’s not much a defense can do when shots just won’t stop falling. And that’s exactly what happened Saturday as Topeka High defeated Free State 81-36 in the championship game of the Lady Firebirds Winter Classic.

“Getting second place in this tournament — there’s nothing to be ashamed of about that,” Free State coach Nick Wood said. “What we can’t do is get caught up in having this game identify the growth we’ve had this weekend. We got so much better as a group throughout the weekend.”

The Firebirds (6-6) finished in second place in the tournament, with junior forward Shannon Clarke and senior guard Caely Kesten making the All-Tournament team.

Coming off an overtime thriller Friday night against Derby, Wood said Free State needs to look to the emotion from that game as a potential turning point in the season.

“When we reflect upon these three games, we need to carry over the emotion we had from (Friday) night,” Wood said. “(We need to) recognize what it took to beat a really good Derby team and then learn from what Topeka High did to us, and then learn from that.”

But two factors led to the Trojans (12-0, No. 1 Class 6A) sprinting out to the lead: backcourt pressure and a relentless 3-point attack. Coming in, the Firebirds knew if they could handle pressure and make shots early, they’d be right in the game.

“But unfortunately they continued to make shots,” Wood said. “They’re ranked No. 1 in the state for a reason, and we were excited about the opportunity to match up and test ourselves and see where we’re at as of February.”

Free State never got a chance to settle in as the Firebirds were quickly down 9-0 before Wood called a timeout. Shortly after, the Topeka High lead stretched to 18-2.

Clarke and junior guard Evy Harrell finally got some shots to fall, but the Trojans held a 25-9 advantage at the end of the first quarter.

The second quarter was more of the same as the Trojans captured a 54-17 lead going into halftime.

Besides the score itself, the biggest discrepancy was the amount of shots for each team. Free State shot 7-of-20 in the first half, while Topeka High shot 19 of 39. A majority of those shots came in transition or from 3-point range for the Trojans.

Down the stretch — with a running clock and convincing lead for Topeka High — Wood continued to keep his team locked in.

“It can’t be about one or two individuals,” Wood said. “It’s about Free State, and we will compete and stick together to support one another.'”

Throughout this season, Wood has preached to his team, “we’re fine and we’ll be fine,” regardless of the outcome. And despite this loss, Wood wants the Firebirds to be cognizant of the road ahead.

“The message is always, ‘Our best basketball is going to be ahead of us,'” Wood said. “And again, it’s about reflecting on what it took for us to beat a really good Derby team, carry that over and continue to get better as individuals and as a group and we’ll be just fine.”

Free State will next play Olathe East on Tuesday. Tipoff is set for 5:30 p.m.