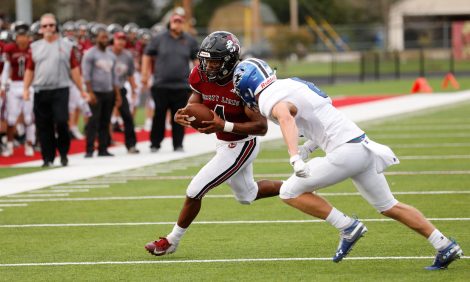 Lawrence High running back Devin Neal looks to collide with Olathe Northwest defensive back Kaleb White on a run during the second quarter on Friday, Sept. 27, 2019 at Lawrence High School.

It was another good week for Lawrence High junior running back Devin Neal.

Neal received Athlete of the Week honors by 41 Action News before Tuesday’s practice following an impressive performance against Gardner Edgerton. Neal then netted a scholarship offer from Kansas State on Wednesday, which means he now has offers from both the University of Kansas and K-State.

Neal then followed things up with a strong showing against Olathe Northwest, lifting the Lions to their first 4-0 start since 2015.

“I always go by a motto of ‘never be satisfied,'” Neal said. “I have always lived by that, so I’m never too satisfied with what has happened. I’m always looking to climb and take that next step.”

Neal’s remarkable stretch this past week has earned him a spot on this week’s top area athletes. But Neal has actually been one of the best players in the area to start the 2019 season.

Lawrence High (4-0, No. 4 in Class 6A) is one of two undefeated football teams in the area, and Neal’s play has been a huge part of that early success.

Through four games, Neal already has 538 yards on 74 attempts. To put that in comparison, Neal ran for 290 yards on 62 carries last fall after scoring on the first offensive play of the season.

After scoring two late touchdowns to propel LHS past Gardner Edgerton in Week 3, Neal followed things up with another solid showing against Olathe Northwest. Last week, Neal ran for 133 yards and three touchdowns on 12 carries. He also added four catches for 90 yards.

“I think what really separates me from a lot of running backs is my hands,” Neal said. “I’m a threat not only running the ball but catching the ball as well.”

Neal is one of the many athletes who shined this past week, so here is a look at the rest of them:

Like Neal, junior running back Tyler Bowden has been dynamic for the half of his 2019 campaign.

In last week’s win over Shawnee Mission West, Bowden ran for 218 yards and four touchdowns on 24 carries. For the season, Bowden has accumulated 730 yards and 10 scores on 81 times. Bowden is averaging 182.5 yards per game on the ground.

Senior Kaitlyn Hamilton, who is an Indiana State commit, is averaging 3.6 kills per set so far this season.

EHS senior Riley Hiebert was the only area cross-country runner who won a race during the Rim Rock Classic on Saturday.

Hiebert won the varsity girls race in the blue division with a time of 19:49.7. It was over nine seconds faster than any other individual in the race. It was enough to lift the Cardinals to a first-place finish as a team.

Freshman Beck Oldridge deserves a ton of credit for his performance this week.

Oldridge scored two goals and recorded an assist to lift the Bishop Seabury’s boys soccer team past Bonner Springs. Late in the match, however, Oldridge suffered a hip injury. He ultimately played through the injury, scoring two goals and notching an assist in a win over Bishop Ward later in the week.

Free State took sixth in the varsity boys race in the gold division with 207 points. Fayetteville won the race with 62 points. Lawrence High placed 23rd as a team with 511 points.

Lawrence High senior Mayson Quartlebaum will be playing basketball at the collegiate level.

Quartlebaum announced his intention to do so when he pledged his verbal commitment to Kennesaw State via his personal Twitter account Sunday night. Quartlebaum went on a visit there this past weekend.

Kennesaw State, which is located in Georgia, is a NCAA Division I member of the Atlantic Sun Conference. Quartlebaum will begin his senior season with LHS, when it travels to Liberty High School on Dec. 7.