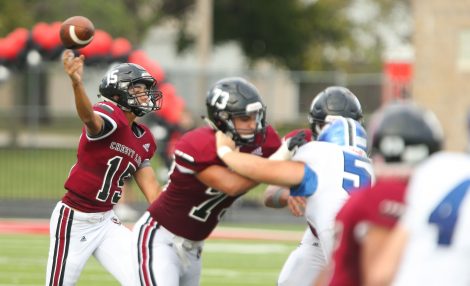 It wasn’t always pretty, especially at first, but Lawrence High’s football team eventually found a way to take control during its 52-21 win over Olathe Northwest on Friday night at LHS. And that is exactly what good teams do in those situations.

The Lions, who were coming off a thrilling win over Gardner Edgerton, avoided any sort of letdown in their homecoming affair against the winless Ravens. LHS scored within the first four minutes of the contest and never surrendered the lead after that en route to the team’s fourth win in as many weeks.

“I was very pleased,” LHS head coach Steve Rampy said. “We were pretty efficient, we didn’t punt once. We got the ball in our playmakers’ hands, and they all made plays. Our defense really only had one breakdown. I was very pleased.”

Once again, Lawrence’s defense set the tone with a three-and-out on the game’s opening possession. Karson Green delivered a huge sack, while Deshon Lewis deflected a pass on third down. LHS then blocked the ensuing punt, gifting the offense with the ball on the opposition’s 28-yard line.

Six plays later, junior running back Devin Neal provided the Lions with an early lead via a 2-yard touchdown plunge. Lawrence (No. 4 in Class 6A) led for the remainder of the night, taking down Olathe Northwest for the second year in a row.

But it wasn’t always smooth sailing for the Lions, who fumbled thrice in the first half. Only one of those three fumbles ended up being recovered by the Ravens. In fact, Lawrence even scored on a fumble recovery when Drew Meyer ended up with a loose ball in the end zone after Neal fumbled trying to score on a short fourth-down attempt.

“We came out slow because we had a lot of interruptions this week,” senior receiver Chris McGee said. “We had homecoming, awards being handed out. I don’t think we came out as tight as we should have been, but we got it together.”

The Ravens responded immediately with a score of their own, but the Lions completely took things over after that.

Lawrence found the end zone in a multitude of ways, scoring 38 unanswered points to eventually force a running clock in the second half. Neal netted two more rushing touchdowns, including a 65-yard score early in the second half.

Junior quarterback Jackson Dooley linked up with senior Bryce Smith for a 8-yard touchdown pass in the second quarter. Junior kicker Connor Gellender nailed a 21-yard field goal to give LHS a 31-7 advantage at the intermission.

The Lions then scored two defensive touchdowns within one minute in the third quarter to remove any doubt about the outcome. Kallun Chitama notched an interception return, while Dre Bridges recorded a fumble recovery for a score. Many reserves got some playing time after that.

“It was a good team win,” Rampy said. “We haven’t had a chance to (get reserves in) for two years. It was good to get some other guys playing time.”

It was an all-around performance by the Lions. Dooley was effective through the air, completing 12-of-14 passes for 202 yards. Seven different receivers — Neal, Smith, McGee, Lewis, Ntense Obono, Graham Hough and Ben King — caught a pass for LHS in the win.

Neal ran the ball for 133 yards on 12 carries behind some more strong blocking from Noah Smith, Acen Villegas, Porter Dannevik, Lane Luna and Drew Meyer on the offensive line.

Many players contributed to another prolific performance by the LHS defense. Defensive linemen Teagan Flynn, Nick Ray and Dylan Gillespie frequently took away the first read of Olathe Northwest’s triple-option attack. Linebackers Cole Morris, Cole Mondi, Austin Hollins and Green then prevented the Ravens from getting to the next level for much of the night.

“I told the guys that it was going to be another big game,” Rampy said. “We just have to come out and play like we can play.”