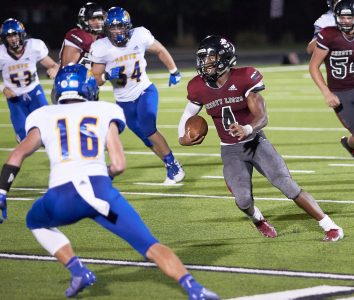 Lawrence High head coach Steve Rampy doesn’t believe in trap games. But even he can admit that this week’s matchup would qualify as such.

That’s why Rampy took a moment to speak to the team during Saturday’s film session, which took place shortly after Lawrence upset Gardner Edgerton on the road. The idea behind the speech was to motivate the Lions to capitalize on the momentum of their 3-0 start.

“The only way trap games happen is if the better team allows it to happen,” Rampy said. “I told them Friday night, if we don’t build on this then it means nothing. We can’t let that be the climax of our season.”

Lawrence, which is now the No. 4 team in Class 6A via Kpreps, will host Olathe Northwest at 5 p.m. Friday for its homecoming matchup. Kickoff was moved up two hours due to the threat of inclement weather, though the earlier start time is just the latest thing to happen during a wild week.

Junior running back Devin Neal received Athlete of the Week honors by 41 Action News before Tuesday’s practice. On Wednesday, Rampy was named Coach of the Week by the Kansas City Chiefs.

Still, the players have handled these distractions and remained focused ahead of Week 4.

“It was tough, there was still chatter about it obviously,” Neal said. “Other than that, not letting it get to our heads too much. That’s not what we are about. We are just going to keep working hard, and keep climbing.”

Having a player like Neal makes it easier to handle any trap-game situations.

Neal scored four times, including a pair of long touchdowns, in Lawrence’s win over then-No. 2 Gardner Edgerton. He scored on an 82-yard reception with 9:09 left and added an 80-yard rushing touchdown with 3:44 remaining to complete the comeback.

“I’ve watched him every day for two years and I was shocked on the last one that he took it for a touchdown,” Rampy said. “There are three guys that had angles on him. As tired as he was in the fourth quarter, he just put it in a different gear than we have even seen.”

Neal finished with 166 yards on 20 carries, marking his second consecutive game of at least 100 yards on the ground. Neal ran for 168 yards on 27 attempts against Shawnee Mission East in the second week of the season.

But Neal will be the first one to admit that his success wouldn’t be possible without strong blocking from Noah Smith, Acen Villegas, Porter Dannevik, Lane Luna and Drew Meyer on his offensive line.

“I’m giving that credit to the O-line,” Neal said. “They make my job way easier. They make the holes, and I just read and react.”

Neal’s impressive start to the season is also a testament to his work ethic in the offseason. After an injury cut his sophomore season short, Neal put in the work this past summer to come back better and stronger than ever.

Through three games, Neal already has 405 yards on 62 attempts. To put that in comparison, Neal ran for 290 yards on 62 carries last fall after scoring on the first offensive play of the season.

For now, though, Neal is just trying to help Lawrence stay in the win column following a 1-8 campaign in 2018.

“Right now, I’m so focused on getting a state championship here,” Neal said. “I’m just playing as hard as I can. If the accolades come, then they come to me. That’s how I view it.”

Another battle between area football teams will take place in Week 4.

Eudora will host Baldwin in a Frontier League clash. The two teams are winless entering this matchup. Last season, the Bulldogs secured a 28-6 win over the Cardinals in this meeting at BHS.

Tonganoxie will travel to Bonner Springs (2-1) following a lopsided win over Eudora last week. The Chieftains are now 3-0 to start the year, scoring at least 42 points in all three contests. THS has also only allowed 14 total points over the last two games.

After back-to-back losses, Perry-Lecompton will try to get in the win column this week. PLHS (1-2) will travel to Wellsville (2-1) at 7 p.m. Friday. The Kaws won this game by a 52-18 margin last season.

The Firebirds finished third as a team, marking their fourth top-three finish in as many meets on the year. Lawrence High, meanwhile, claimed fifth in the team standings.

Paris Spotted Tail led the Lions by finishing third in the floor routine and fifth in bars. She finished fourth in the all-around rankings, which was the highest mark by a city gymnast in the meet.

Lawrence’s girls golf team scored 224 as a team, finishing only behind Seaman’s mark of 168 at the Washburn Rural Invitational on Thursday afternoon at Wamego’s Country Club.

Rylie Hayden posted the highest finish for the Lions, shooting a 109 to place 45th. Josie Abernathy came in 53rd with a 115.

Bishop Seabury got to .500 on the year with a 6-0 home win over Bishop Ward on Thursday night.

Beck Oldridge, who was playing through a hip injury, scored two goals and recorded an assist. Harrison Hartzler, Sam Bayliss and Freddy Comparato all notched a score as well in the win.

The Chieftains erased a halftime deficit to pull off the narrow victory. Cuyler Kietzmann and Abel Mendoza both scored in the one-goal win. Mendoza’s score came on a penalty kick in the second half.