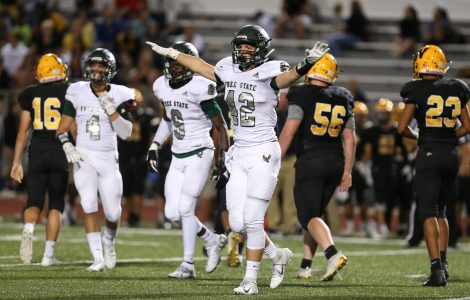 Free State's Gage Callaghan waves off a field goal after a missed attempt by Shawnee Mission West to end the first half on Thursday, Sept. 26, 2019 at Shawnee Mission South High School.

After being set up by a big kickoff return from sophomore running back Dash Cleveland into Shawnee Mission West territory, Free State junior Tyler Bowden burst through the line for a 30-yard touchdown, his third of the night.

The drive took just a minute and five seconds and proved to be pivotal in the Firebirds’ 44-28 win over SM West on Thursday night.

“We were fortunate to win the game, because we didn’t play our best,” Free State head coach Kevin Stewart said. “But sometimes you’ve got to win ugly.”

Part of the “ugly win” came from Free State committing 11 penalties on the night, something Stewart said the team works on daily to prevent.

“We’ve had great improvements, then this was a step back,” Stewart said. “Our guys are really competitive, and they do get chippy. We’ve got to do a better job.”

Free State looked to grab its first winning streak of 2019, sitting at 2-1 going into Thursday’s matchup and coming off a 59-14 win over Shawnee Mission North last week.

The scoring started on the other end, though, with SM West junior quarterback Weston Moore finding senior running back Mike Williamson down the middle of the field for a 66-yard touchdown.

Just over three minutes later, Free State responded with Bowden’s first score of the night from 14 yards out on fourth and 2 to tie the game at 7-7.

It then turned into a battle between SM West junior running back Andrew Kinney and Bowden, as Kinney scored his first touchdown of the night at the beginning of the second quarter, a 20-yard scamper down the sideline.

However, a misplayed snap forced a bit of a panic and a missed extra point attempt for the Vikings.

Later in the quarter, Bowden (3-yard run) and Kinney (1-yard run) each scored again, bringing the SM West lead over Free State to 20-13 with just over three minutes to play in the first half.

Bowden’s quick, 30-yard burst with 1:56 to go in the half secured a 21-20 halftime lead for the Firebirds to give them a boost going into the break.

Even with SM West holding a 13-8 advantage in first downs, Bowden’s play and the leadership from senior Malik Berry at quarterback proved to be enough of an edge for the Firebirds in the first half.

Coming out of the break, Free State was driving down the field thanks to Bowden and Berry. And after a 31-yard run by Bowden and 7-yard pass to Tae Rainey, the Firebirds entered the red zone quickly.

However, Berry tried to find a man over the middle but instead threw an interception in the end zone for the first turnover of the night.

But SM West didn’t take advantage as Moore threw an interception to Free State sophomore cornerback Jet Dineen, who set up the Firebird offense at the 25-yard line.

Dineen, who finished with two interceptions on the night, was coming off an injury and this was just his second game back.

“He had interceptions all summer,” Stewart said. “He just has ball skills and a good understanding of the game. He was there in the right spots, so good by Jet.”

And as had been the case all game, Bowden scored again, this time a 10-yard touchdown to give Free State a 27-20 lead.

On the next drive, Kinney turned the ball over with a fumble that was recovered by Free State, setting up the Firebirds at the 25-yard line once again. Free State junior kicker Joey Wood capped the drive with a 28-yard field goal.

But the Vikings weren’t out of it yet, as Kinney broke off a 44-yard run on 3rd-and-23, and running back Treyvon Gilyard punching it in for a 12-yard touchdown. Moore also scored on a two-point conversion.

While it felt like the momentum had swung with that scoring drive and a Bowden fumble on the next possession, the Vikings were forced to punt to start the fourth quarter.

Free State took advantage, thanks to a 33-yard statement run from Bowden down the sideline that set up a 3-yard score from Berry to take a 37-28 lead with 6:55 to play.

Berry added a rushing touchdown with 33 seconds left, giving Free State enough of a boost to seal the victory.

“We’ve got a lot of good teams at the end of our schedule, teams that are playing good football,” Stewart said. “So (we need to) keep working to get better every single day and clean up the little things.”

Free State next plays Sedalia Smith-Cotton (Mo.) on the road on Friday, Oct. 4.