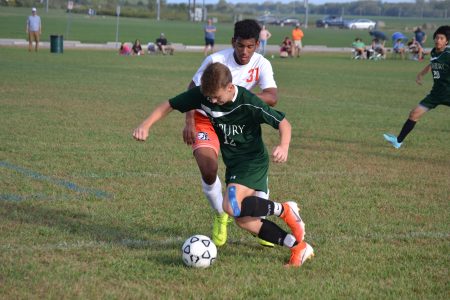 Bishop Seabury freshman Beck Oldridge makes a move past a Bonner Springs defender during a match Tuesday night at the Youth Sports Complex on Sept. 24, 2019.

It was an especially long pregame routine for the Bishop Seabury boys soccer team.

Due to transportation issues, Bonner Springs showed up 16 minutes late Tuesday afternoon at the Youth Sports Complex. The visiting team was then given its own warmup time, meaning the match didn’t start until 37 minutes after it was originally scheduled to begin.

“I was joking that we warmed up for 50 minutes, that’s longer than an entire half of play,” BSA head coach Ivo Ivanov said. “It was awkward when the game started, but things like this happen.”

But, then again, few things have gone as planned for the Seahawks this season. Tuesday’s victory exemplified the resilience Bishop Seabury has shown through the first seven matches of the 2019 campaign.

BSA has been hit with a multitude of injuries early in the year, though it still has found a way to win three of its last four matches. And that is because players keep stepping up, even if they have to adjust to new roles.

“We actually are letting it define us,” senior Freddy Comparato said. “We are using our injuries to play for the people that can’t be on the field with us. It is making us play harder and stronger every game.”

With starting goalkeeper Tony Jung sidelined, freshman Truman Hill moved to the net from his defender position. He recorded a number of saves, including a pair of key stops early in the second half.

Senior defender Sam Bayliss, who is playing on an injured ankle, spearheaded a defensive attack to contain Bonner Springs’ offense for much of the night. Senior Sam Hindman, junior Peter Westbrook and senior Julian Almon made multiple stops as well.

The forward position is where Bishop Seabury has really had to withstand the injury bug, however.

Junior Evan McHenry is sidelined with a shoulder injury, while Harrison Hartzler is laboring through an ankle injury. Freshman Beck Oldridge, who has been a scoring machine as of late, was taken to the ground by a Bonner Springs player with four minutes remaining in the match.

“It is not easy,” Ivanov said. “We are really fragile in the final third. We had several team meetings where we discussed people have to step up and elevate their games very early in their careers for us to survive.”

Still, at least for one night, the Seahawks made the most of a bad situation. Junior Brayden Shoemaker scored the game’s first goal on an assist by Oldridge. Before the end of the first half, Oldridge netted a score off an assist by Comparato.

Comparato took matters into his own hands in the second half, scoring on a fastbreak attempt to give his team a 3-0 advantage. Oldridge notched one more score off a miss by Hartzler with about five minutes remaining.

Bonner Springs scored its lone goal in the final match, which came moments after Oldridge was forced out of the game. Shortly after the match, the team ran over to the opposite side of the field to check on his status.

While it is unknown how severe Oldridge’s injury is at this point, the Seahawks know they have no other choice but to push on just as they have done all season.

“It was early in the season when I realized that we are going to work even harder because we won’t have a full-strength (lineup) every game,” Comparato said. “We work together with who we got and we don’t get mad at each other. We have to stick together and play our game.”

For the third match in a row, Free State’s boys soccer team ended up in the win column.

The Firebirds took down Shawnee Mission South for a 3-2 home win Tuesday night. They have now won three matches in a row, all of which have been by one goal. Nathan Herschell scored two goals, while Parker Hodgson added another score for Free State.

Lawrence ended up with a 2-2 draw in a hard-fought Sunflower League match with Shawnee Mission West Tuesday night.

Mason Anderson and Joseph Hawker each scored for the Lions in the draw, which ended a three-match win streak. LHS is now 4-2-1 on the year, including 1-1-1 during it first three matches of Sunflower League play.

LHS will travel to Olathe North at 7 p.m. Thursday.

Javier Trujillo and Abel Mendoza scored the two goals for the Chieftains in the narrow victory. THS scored one goal in each half. Goalkeeper Jacob Howell had a clean sheet in the net.

In order to secure a win on the road, Lawrence’s volleyball team rallied from a one-set deficit.

Free State’s volleyball team got back in the win column during its triangular Tuesday night.

After falling to Gardner Edgerton in straight sets (25-18, 25-23), the Firebirds bounced back by sweeping Shawnee Mission South (25-14, 25-13). The split came just a few days after FSHS went 1-3 during a tournament this past weekend at Lee’s Summit West.

Claire Covert led the way for the Firebirds, shooting a 43 on nine holes. Kennedy Birk came in 13th place with a 46, while Addyson Meadows finished 21st with a 51. Jessica Reed was 24th overall with a 53.

Eicher ran a time of 23:07 to place ninth overall in the varsity girls race. As a team, the Seahawks were short-handed due to many of their top runners preparing to compete at Rim Rock Farm this weekend.