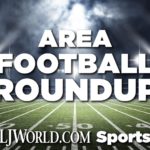 Tonganoxie never trailed in its 43-8 home win over Eudora in a battle between two area teams.

The Chieftains jumped out to a 21-0 lead at the half and never looked back, improving their record to 3-0 to start the year. Eudora’s lone score came in the third quarter with a 67-yard touchdown pass from Zeke Reazin to Silas Etter. The 2-point conversion was a connection between Reazin and Sloan Hayden.

THS running back Cooper Cunningham had another stellar showing, running for 210 yards and two touchdowns on 21 carries. Elijah Tyner, Sam Kleidosty and Andrew Colvert all notched rushing touchdowns. As a team, the Chieftains ran for 362 yards on 39 attempts.

Junior quarterback Blake Poje completed 11 of 19 passes for 181 yards and one touchdown. Tyner was his top target, hauling in five catches for 50 yards. Kleidosty netted the touchdown grab, which was a 10-yard hookup.

Tonganoxie (3-0) will travel to Bonner Springs, while Eudora (0-3) will play host to Baldwin next week.

In a rematch from last season’s thrilling postseason battle, Perry-Lecompton came up on the losing end again with a 41-21 home defeat to Sabetha.

Thad Metcalfe gifted the Kaws an early lead with a pair of touchdown runs in the first quarter. He scored from 11 yards out at the 4:18 mark and then added a 70-yard touchdown run with 2:01 left in the opening period.

Sabetha then scored 28 unanswered points to hand PLHS its second loss of the young season. Perry-Lecompton quarterback William Welch linked up with Dawson Williams for an 11-yard score in the fourth quarter, though it proved to be too late. Metcalfe finished with 140 yards on 16 carries.

Perry-Lecompton (1-2) will travel to Wellsville at 7 p.m. Friday.

For the third week in a row, Baldwin was unable to get in the win column.

The Bulldogs were handed a 38-12 loss at home by Louisburg. Baldwin has now allowed at least 26 points in three consecutive weeks. BHS has scored a total of 32 points through the first three games of the season.

Baldwin will travel to Eudora at 7 p.m. Friday.

The Lions are legit

The biggest story from Week 3 was Lawrence High’s 35-34 upset win over Gardner Edgerton, the No. 2 ranked team in Class 6A. It marked the first regular-season loss for the Trailblazers since 2017.

Lawrence, which went 1-8 in Steve Rampy’s first year last fall, is now 3-0 to start the season. LHS scored 14 unanswered points to complete the comeback effort against a team that made it the 6A quarterfinals last year.

After this performance, the Lions could be ranked entering their Week 4 matchup with Olathe Northwest. At the very least, Lawrence proved that it is going to be a team to watch this season.

There are a number of talented backs in this area, and that was evident in Week 3.

LHS junior Devin Neal scored the final two touchdowns of that impressive win on an 82-yard reception and an 80-yard rushing attempt. He finished with 20 carries for 166 yards in the 1-point win over Gardner Edgerton.

Free State’s one-two punch of Tyler Bowden and Dash Cleveland scored a trio of rushing touchdown in a lopsided victory against Shawnee Mission North. Bowden finished with 120 yards on 11 attempts, marking the third consecutive game that he ran for at least 100 yards.

Tonganoxie was led by Cooper Cunningham, who finished with 210 yards and two scores on 21 carries. Cunningham, who became the team’s feature back this fall, ran for 232 yards in the season opener and 140 yards in Week 2.

A pair of area squads have yet to get in the win column in 2019.

Baldwin is 0-3 after its third-straight double-digit loss to start the year. Eudora has scored in the single digits in two of its three losses to begin the season. EHS has one win in its last 12 contests, while Baldwin has two such victories.

The two teams will square off in Week 4, meaning one squad is guaranteed to earn its first win. The Bulldogs beat the Cardinals in last year’s meeting. Kickoff is slated for 7 p.m. Friday at EHS.