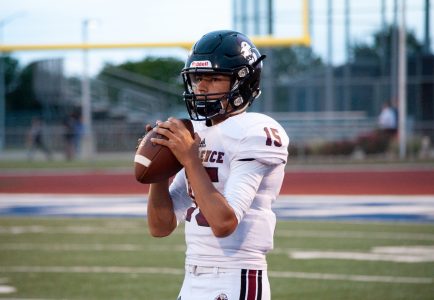 While last week’s game took two days to complete, Lawrence High’s showdown on the road against Gardner Edgerton (No. 2 Class 6A) picked up the pace considerably.

Before anyone could take a breath, the Blazers and Lions were off to the races in what ultimately resulted in a 35-34 LHS victory, improving the Lions’ record to 3-0 after going 1-8 in 2018.

“That was an incredible effort by our guys on both sides of the ball,” LHS head coach Steve Rampy said. “(Gardner is) such a good football team and we knew coming in it was going to be really hard. They’re so explosive and so physical.

“Our defense just held together and made plays.”

The game started out promising for the LHS offense until junior running back Devin Neal fumbled the ball at his own 27-yard line, which was promptly scooped up by GE linebacker Davonte Pritchard and ran in for a Blazers touchdown.

The Lions quickly responded on the next drive, as Neal broke off a run up the middle for a 52-yard touchdown of his own.

But the Blazers bounced back with the run game as senior quarterback Teven McKelvey ran for his first of three rushing touchdowns, this time for a 19-yard score to take the lead right back.

Lions junior quarterback Jackson Dooley managed to find junior quarterback/wide receiver Tre’ Jackson across the middle for a 41-yard score to pull even again at 14-14, but the rest of the first half would be all GE.

McKelvey punctuated the first quarter with a 47-yard touchdown run and the Blazers recovered their own onside kick at the LHS 36-yard line, but they couldn’t punch it in. However, McKelvey tacked on a 2-yard score midway through the second quarter to give GE a 28-14 lead going into halftime.

“We told them we needed three touchdowns,” Rampy said. “This game is all about believing. You’ve just got to keep believing and we did.”

The Blazers’ offense lived up to its name with 13 first downs and 295 rushing yards in the first half alone, with only two pass attempts from senior quarterback Tyler Goetzmann. McKelvey attempted two passes as well, but both were called back by penalties.

For LHS, the offense moved the ball well, but penalties on both sides (seven flags for 56 yards) stalled the offense and spoiled defensive stops. Neal rushed for 73 yards on 11 carries and Dooley was 6-for-15 for 117 yards through the air in the first half.

Coming out of the break, the Lions got the spark they needed with a fumble from McKelvey that the Lions recovered on the GE 32-yard line, which Dooley and Neal took advantage of as Dooley found Neal on fourth-and-goal for a 6-yard score. This cut the GE lead to 28-21.

And initially, it looked like the Blazers would take control right back, as senior running back Jakob Renaud ran for a 67-yard touchdown, but it was called back for holding on GE.

However, even with three fumbles in the third quarter, GE managed to score at the beginning of the fourth with a 1-yard run from senior fullback Jacob Butash. However, junior kicker Caleb Calvin missed the extra point, which would prove to be crucial down the stretch.

The shootout continued, though, as Dooley rolled to his right and found Neal down the sideline for an explosive 82-yard catch and run for a touchdown.

This served as a momentum swing in favor of LHS, which forced a punt from GE on the next drive, and capitalized with an 80-yard touchdown run from Neal to take a 35-34 lead with 3:44 left to play.

“(I knew) that nobody was going to catch him, because he’s really fast,” Rampy said of Neal.

Gardner Edgerton attempted a 50-yard field goal with 11 seconds remaining, but the kick sailed wide left, and Lawrence High held on for the upset victory.

Even though the Lions pulled off the upset and are sitting at 3-0, Rampy said he doesn’t want to have the team live in the moment.

“We’ve got to get ready to play next week and play a really good Olathe Northwest team and everybody we play is going to be really good,” Rampy said. “So we’re never in a situation where we can take a breath.”

LHS comes back home next week to take on Olathe Northwest on Sept. 27.