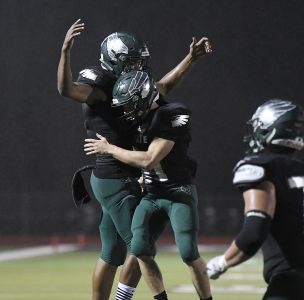 Malik Berry celebrates with Tyler Bowden after scoring a touchdown against Shawnee Mission North Friday night at FSHS on Sept. 20, 2019.

Despite coming off its first regular-season loss since 2016, it was still business as usual for the Free State football team.

After a three-and-out on the game’s opening possession, the Firebirds scored on eight straight drives to close out the first half. The game was never in doubt after that, as Free State rolled past Shawnee Mission North for a 59-14 win Friday night at FSHS.

For a moment, albeit a brief one, the Firebirds dealt with similar offensive struggles that plagued them in last week’s 26-17 loss to Olathe East. On the game’s first drive, Free State was forced to punt due to a strong start from the Shawnee Mission North defense.

Free State’s defense responded with a three-and-out of its own, giving the ball right back to the offense. This time around, the offense got things rolling under the direction of senior quarterback Malik Berry, who was moved back to his old position after playing inside linebacker the previous two weeks.

Berry capped off a seven-play, 59-yard drive with a 1-yard touchdown plunge at the 5:32 mark in the opening quarter.

And the flood gates opened after that.

“Sometimes it just takes a possession or two to get going,” Stewart said. “I think Shawnee Mission North came out fired up and had a good little defensive front lined up against us.”

Following a 38-yard field goal by Joey Wood, FSHS scored seven consecutive touchdowns in a multitude of ways to end the first half. Junior running back Tyler Bowden (51-yard run) and sophomore running back Dash Cleveland (50-yard run) both had long touchdown carries on the first play of those respective drives.

Cleveland also punched it in from 2-yards out, as all four touchdown runs were made possible by strong blocking from Turner Corcoran, Ryan Lutz, Tyler Gourley, MJ Issa and Frankie Calderon.

Berry, who started at signal caller all of 2018, looked just as comfortable going to the air as well. He completed 10-of-13 passes in the first half for 216 yards and three scores. Senior receiver Tate Fanshier scored on a 73-yard hookup, and he now has three touchdowns on three catches through three weeks.

With 26.8 seconds left in the first half, Berry hit Bowden on the flat for a 28-yard touchdown connection. The Indians then fumbled the ensuing kickoff, which was recovered by sophomore linebacker Josiah Nash. One play later, Berry delivered a 19-yard touchdown strike to senior receiver Marcus Preston to give the Firebirds a 52-7 advantage at the intermission.

“I thought we did a better job getting up on the ball,” Stewart said. “Tempo, little things. I think the guys are getting used to that now. It takes a little bit to get used to a new offense.”

Free State’s defense was just as dominant, too. Shawnee Mission North didn’t pick up a first down until the 11th play of the contest. The Indians didn’t cross midfield until the 4:52 mark in the second quarter, though FSHS senior linebacker Wyatt Durland recovered a fumble on the next play to stall a promising drive by the opposition.

Lovette Epelle, Tai Newhouse and Devon Buck dominated the trenches on the defensive side of the ball for the Firebirds.

Joey Eddis, Ben Miller and Gage Callaghan made a number of plays in the linebacker unit. Jet Dineen and Ryley Wheat prevented Shawnee Mission North from getting anything going in the passing attack. Miller also recorded an interception for the Firebirds.

“The defense has been really solid all year,” Stewart said. “They are looking really good.”

There was a running clock for the duration of the second half, which allowed many of the reserves to get some action in the lopsided Sunflower League clash. Sophomore running back Elijah Harshaw scored Free State’s only points in the second half on a 5-yard touchdown run in the third quarter.