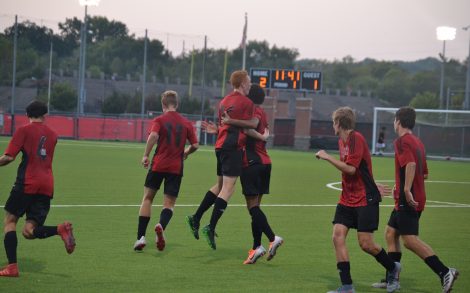 Lawrence High junior (No. 14) celebrates with his teammates after a goal late in the first half during a match against Wyandotte Thursday night on Sept. 19, 2019.

Lawrence High head coach Mike Murphy had no doubt that his team would respond. After all, the Lions have had to do so in nearly every match this season.

After a pair of offsides stalled Lawrence’s offense on two different scoring opportunities, Wyandotte evened things with a counter attack with 13:03 left in the first half. Rather than falter, though, Lawrence bounced back with three consecutive scores to secure a 4-1 victory Thursday night at LHS.

“We know that we just have to play 80 minutes,” Murphy said. “We know we are a team that can’t take anything for granted. We just have to keep playing. We know we can celebrate when the final whistle blows.”

Junior Alec Murphy delivered the game’s first goal on an impressive putback with 24:42 left in the first half.

Senior Matteo Kalusha-Aguirre threaded a pass through the middle of the Wyandotte defense, and Murphy fired a close shot toward the goal. The ball bounced off the left post, but Murphy corralled the rebound and connected on the other side of the net.

Once Wyandotte scored, Lawrence (4-2) was quick to respond to remove any doubt. Junior Mason Anderson delivered a strike that was several yards outside the box and pounded his chest in celebration after the go-ahead score.

“That was wild, I will admit to that,” Anderson said. “We just have a quick offense; we know we have each other’s back as long as we believe in each other.”

The Lions put the game away for good with a pair of second-half scores. Stark notched a goal with 30:30 left in the match, while junior Chase Reed capped things off with a goal of his own with 4:35 remaining.

LHS never stopped being on the attack, however. Sophomore Aiden Berndsen-Perez, freshman Cale Scott, junior Wheeler Battaglia-Davis, Anderson and Kalusha-Aguirre were all aggressive at the forward position when on the field. Senior midfielder Joseph Hawker contributed to the offense as well.

Even senior forward Jordan Lavin had a couple of great scoring opportunities late in the match that he couldn’t convert on.

“We are built a certain way,” Murphy said. “The formation and the personnel, the players are really starting to get a feel for it. We should have probably finished about four more (goals), but we have had that in other games, too.”

In the end, Lawrence has found a way to win three matches in a row after a 1-2 clip to start the year. The Lions know that their toughest test is yet to come, but Thursday’s performance was an example of what can happen when the players are dialed in.

“I think it is our team chemistry,” Anderson said. “I think it is the way our coaches put this team together. We all have a strong brotherly bond, and it just works really well.”

Nelson finished first in the varsity girls race at Wellsville on Thursday afternoon with a school-record time of 20:00. She now has two victories in her first three meets of her high school career. Senior Sabrina Eicher took 19th place with a mark of 23:07, as the Seahawks finished fifth out of nine teams.

Sophomore Diego Klish took 12th place in the boys race with a time of 19:20.

The second set to Seaman was the only set that FSHS has dropped during this five-match win streak. Free State (7-3) will compete in a triangular at Gardner-Edgerton at 5 p.m. Tuesday.

The Seahawks scored four of their five goals in the second half of the lopsided win. Beck Oldridge led the team with two goals. Harrison Hartzler, Freddy Comparato and Sam Bayliss also scored a goal.

It was an impressive showing for BSA, which dropped a 3-1 decision to KC East on Tuesday. Brayden Shoemaker scored the team’s only goal in that match.

Still, THS played all three sets close in the defeat. The Chieftains fell by a 25-23 margin in the first set and dropped a 26-24 decision in the second set. Pleasant Ridge recorded a 25-20 win in the third set.

The loss came two days after Tonganoxie took down Piper for a 3-2 win. The Chieftains remain 2-0 in Frontier League play.