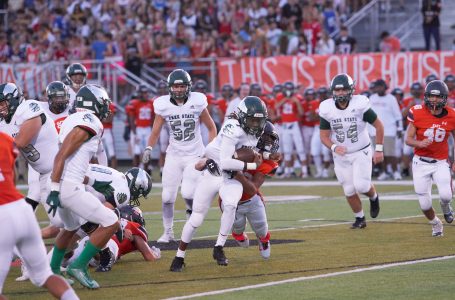 It has been quite some time since Free State’s football team experienced a regular-season loss.

Prior to last week’s defeat at Olathe East, the Firebirds hadn’t dropped a regular-season decision since a 34-21 loss at Park Hill on Sept. 16, 2016. FSHS rattled off eight consecutive wins after that.

It remains to be seen how this year’s team, led by first-year head coach Kevin Stewart, will respond this time around. Free State’s first shot at getting back in the win column will be a home tilt against Shawnee Mission North (0-2) at 7 p.m. Friday.

“This is a learning opportunity,” Stewart said. “Losing football games, that happens. They haven’t had many losses around here, but it is time to learn from it and move on and get better.”

Because of that mindset, Free State’s 26-17 loss in Week 2 could end up being a good thing.

The truth is that the Firebirds haven’t been in this position much as of late, winning double-digit games to begin each of the last two years before suffering a season-ending defeat in the postseason.

An early loss can serve as an important lesson, as it can allow players and coaches to adjust. The Firebirds will make changes in order to find what works, so that they can play their best football when it matters the most.

“It’s good for them to understand that you have to come prepared every single week to play good football,” Stewart said. “Ultimately, you learn a lot from losing. When you lose, you start to understand that we have some things to fix and we have to make some changes.”

One notable change by Free State will be at the quarterback position.

Senior Colter Maldonado has been laboring through a neck injury, which he originally suffered in a scrimmage before the start of the season. Despite the injury, Maldonado has still thrown for 201 yards and three touchdowns through two contests.

Malik Berry, who was the team’s starting quarterback in 2018, will move back to his old position for this week. He threw for 1,100 yards and 20 touchdowns last year, while also picking up 501 yards and five scores on the ground.

The move will not allow Berry to play on the defensive side of the ball, where he has made a number of plays at the linebacker position.

“Me and the offense is getting used to it again. Getting used to the counts, the play calls. I think it has been going pretty well,” Berry said. “If that’s the best shot for us to keep winning games, then I am going to do it.”

As a result, senior Ben Miller will move to inside linebacker from his outside position. Tae Rainey will also be involved in Free State’s secondary at the safety position after playing receiver in the first two games.

Most of all, though, the Firebirds hope that the move will help them discover what they do best.

“We have to find an identity of who we are,” Stewart said. “That’s the main thing.” 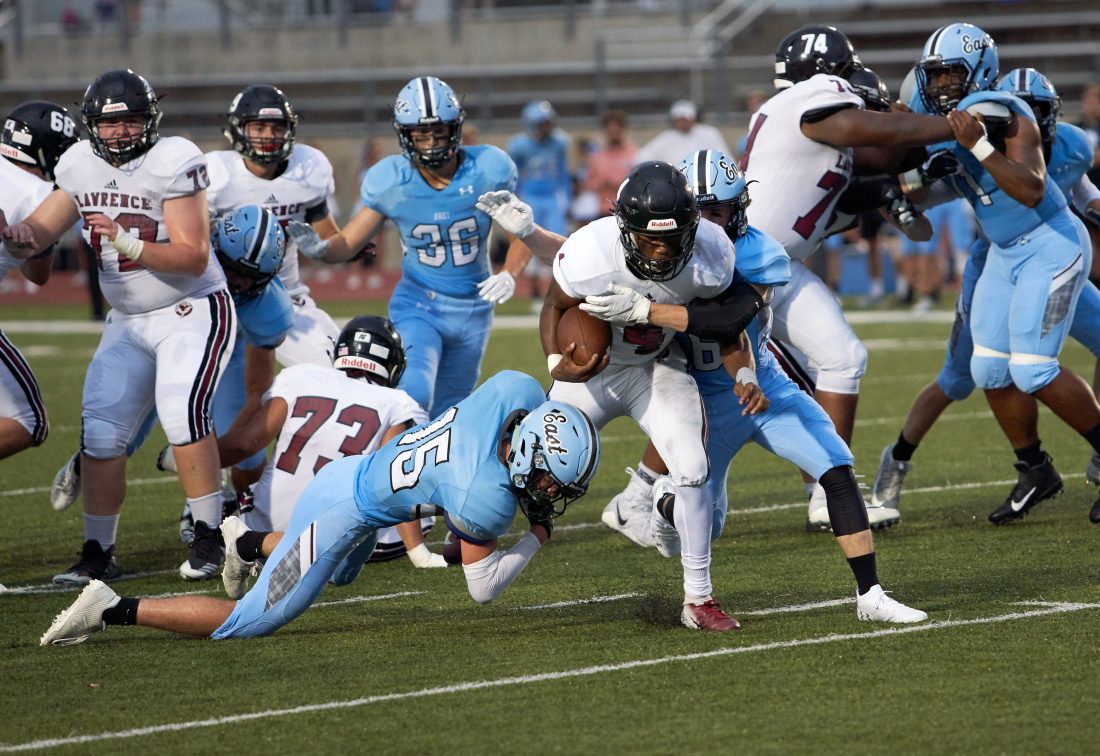 Lawrence High’s football team has already doubled its win total from a season ago.

There are many reasons why the Lions are now 2-0 to start the season after going 1-8 in head coach Steve Rampy’s first year in 2018. But one of the biggest keys to the team’s early success is the growth of the offensive line.

“Coming in, we were a lot more experienced than we were last year,” LHS offensive line coach Ben Ehret said. “We need to come out and start games better. We need to make better in-game adjustments to what teams are doing to us. If we can do that, we can be a lot more effective unit for our offense.”

That growth was evident in the second half of Lawrence’s 30-7 win over Shawnee Mission East last week. Junior running back Devin Neal, who had 27 carries for 168 yards in the win, broke free for a 19-yard touchdown run on his final rushing attempt.

Neal had five carries that went for 10 or more yards against the Lancers. Running back Graham Hough also had a 15-yard run on his first carry in the second half. Junior quarterback Jackson Dooley had plenty of time to dissect the Shawnee Mission East defense.

All of that was made possible by the five-player unit of Noah Smith, Acen Villegas, Porter Dannevik, Lane Luna and Drew Meyer on the offensive line.

“Coach Ehret and I have really high standards,” Rampy said. “We are on that group. I believe it is the most important group for a football team. We have really high expectations, and we are really on them every day.”

Of course, the improvement this season was expected due to a multitude of reasons.

For one, players put in the work this offseason to be stronger. Smith (6-foot-4, 292 pounds) and Villegas (6-foot, 275 pounds) have the size to provide immediate production as sophomores. Smith is the team’s left tackle, while Villegas is at left guard.

Dannevik, the team’s starting center, is up to 6-foot-2 and 221 pounds. Luna, a right guard, is now 6-foot and 217 pounds. Meyer, who is 6-foot-2 and 223 pounds, is holding down the right tackle spot after playing left tackle at some point last season.

But that level of continuity is perhaps the biggest reason for the Lions’ growth as a unit. All five players have held down their respective positions through three weeks compared to last year when Lawrence’s offensive line featured a different look on a weekly basis due to injuries.

“We had to make a lot of adjustments; a couple of our starting guys went down and we had to fill in,” Meyer said. “Hard work in the locker room and focusing have been pretty good for us. We have just been playing hard.”

Lawrence will face its toughest test yet when the team travels to Gardner-Edgerton at 7 p.m. Friday. The Trailblazers, who went 10-1 last fall, are 2-0 after a 49-14 win over Shawnee Mission East and a 34-7 victory over Olathe West to start the season.

In this meeting last fall, LHS dropped a 33-13 decision at home. But the Lions are improved, particularly on the offensive line, this time around. And they appear ready for the challenge.

“I thought going into the year, they’d be the best team in our league,” Rampy said. “It is going to be a great challenge for us on both sides of the ball, but it is time to go see where we are.”

A pair of area football teams will square off in Week 3.

Tonganoxie will look to stay undefeated when it welcomes Eudora (0-2) in a battle between Frontier League foes. THS is averaging 45.5 points per game through two weeks, while EHS has scored a total of 27 points this season.

Baldwin (0-2) is also looking for its first win of the year, as it will host Louisburg this week. The Bulldogs have scored 20 points through two weeks and are coming off a 57-6 defeat at KC Piper.

Perry-Lecompton (1-1) will look to bounce back this week following a 14-7 defeat at Holton. PLHS will host Sabetha (2-0), the very team that eliminated the Kaws in the postseason last fall.

Predictions: Tonganoxie over Eudora, Louisburg over Baldwin and Sabetha over PLHS.