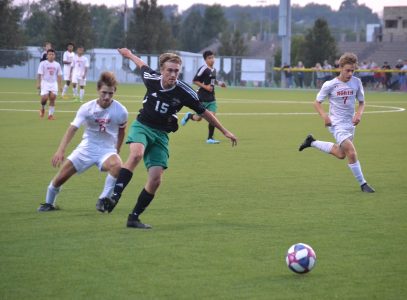 Free State senior Kadin Spiehs races past Shawnee Mission North defenders to the ball during a match Tuesday night at FSHS on Sept. 17, 2019.

Once the ball fell safely into sophomore goalkeeper Aydan Works’ hands, Free State’s sideline let out a sigh of relief.

Yet Shawnee Mission North’s last-ditch effort, a free kick with seven seconds remaining, never had a chance. It merely capped off a 1-0 win for the Firebirds, who improved to 2-1-1 through the first four matches under first-year head coach Hussam Mohammed.

“I think we can go far with this team,” Mohammed said. “They want to win and they take soccer seriously.”

But the performance was especially significant considering what had just happened 24 hours earlier.

Free State finished in a 1-1 draw after a pair of overtimes in Monday’s match at De Soto, though the players felt like they should have won that match. It is only the second time that the Firebirds didn’t end up in the win column to start the season, but on both occasions they believed they were the better team.

“It feels good to be at home and win in front of our crowd,” senior Ashton Owen said. “We had a rough game last night. So it was nice to get the (win), but we need to work harder. There should have been more goals.”

For a moment, it appeared that Free State was going to let another winning opportunity slip away. The Firebirds missed a barrage of good attempts in the first half, many of which hit the post or flew just by the net.

Owen, Kadin Spiehs, and Nathan Herschell were at the forefront of a senior-led attack that put pressure on the Shawnee Mission North defense. Krishi Sabarwal, Pete Junge, Zach Goertzen and Wyatt Farrow dictated possession in the midfield.

“We have a really good backline,” Mohammed said. “We are one of the best schools at ball possession.”

With 27-plus minutes left in the match, Free State finally caught its break.

A penalty by Shawnee Mission North in the box gave FSHS a chance to get on the scoreboard. Owen attempted to confuse the opposing goalkeeper before firing it to the right side of the goal. The ball slipped through the goalkeeper’s hands, and the lone score did the trick for Free State.

“I tried to get the goalie off with my eyes, but I guess it didn’t work,” Owen said. “It still went in. It’s an easy shot, but it is a lot of pressure. Especially in front of our fans.”

Free State will travel to Olathe Northwest at 5 p.m. Thursday.

Aiden Berndsen-Perez and Mason Anderson scored the two goals for the Lions. Cale Scott was credited with an assist in the one-score victory. LHS improved to 3-2 after their second consecutive win, and they will return home for their next match.

LHS will play host to Wyandotte at 6:30 p.m. Thursday.

Grayson Sonntag scored in the second overtime to lift the Chieftains to a one-score win at home. Javier Trujillo scored the first goal for THS, which came in the opening half. THS will play host to Piper on Thursday.

Lawrence’s volleyball team came away with one win and one loss in a triangular at Shawnee Mission North on Tuesday.

Lili Derby, Lawrence’s No. 2 singles player, came away with three wins in as many matches during the team’s home quadrangular Monday afternoon.

Derby secured three of the team’s seven wins on the day, as the Lions went 1-2 during their second home meet of the season. LHS defeated Topeka High by a 4-0 margin to salvage the afternoon after dropping 3-1 decisions to both Washburn Rural and Shawnee Mission South.

Katie Logan picked up one victory in the No. 1 singles spot, while Lana Chieu and Laura Teska went 1-2 as the team’s top doubles tandem. At No. 2 doubles, Morgan Marsh and Ryleigh Leon also went 1-2.

Lawrence will compete in a tournament at Kossover Tennis Center at 9 a.m. today.

Round 1: Lawrence falls to Washburn Rural (3-1)