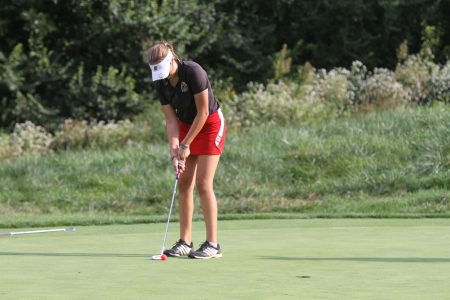 LHS senior Rylie Hayden lines up a putt. Hayden finished 38th with an overall score of 110 at the Lawrence Country Club Invitational on Monday, Sept. 16.

Even with the heat index in the 90s and having to deal with the rolling hills at the Lawrence Country Club golf course, Free State senior Kennedy Birk leaned on course familiarity.

“Oh my gosh. I was sweating and I have the worst tan line right now,” Birk joked. “But we just have to learn to play through it.”

Free State girls golf finished in fourth with 377 points Monday at the Lawrence Country Club Invitational, and Birk believes it will be a step in the right direction for the Firebirds in repeating last season’s accomplishment of bringing the entire team to state.

“I feel like this is probably our best team that we’ve had,” Birk said. “So yeah, I’m very excited.”

Birk, who finished 10th overall with a score of 88, said she feels “really good” about this year’s team and incorporating everyone into a leadership role, regardless of grade or experience.

“We work very well together,” Birk said. “We have a lot of similarities.”

Birk said the invitational was one of the first steps toward building that confidence, as well as a culmination of the team’s work over the summer. The Firebirds spent time at Eagle Bend Golf Course and now regularly practices a “quick nine” holes at the Lawrence Country Club on Tuesdays and Thursdays — which makes things a bit easier given the weather.

“Especially my first hole, I was really scared,” Birk said. “Then once I started hitting I was like, ‘It’s getting better. It’s totally getting better.'”

“We played a lot at this course last year, at least the first five holes probably we would play and practice at,” Hayden said. “Knowing how the course lies and being able to play here before in past years was definitely helpful because you know where all the holes are and where all the greens are and how fast the greens are.”

Hayden finished 38th with an overall score of 110 while playing as the lone LHS golfer. Her teammate, senior Josie Abernathy, became sick near the beginning of the invitational and had to withdraw.

“Obviously I was upset because I love Josie,” Hayden said. “Having her in tournaments to talk to after and to see during just to be like, ‘Hey how’s this going,’ helps a lot.

“Just because you have someone to be there for you if you need it and someone to talk to.”

However, Hayden found solace in the fact she would see Abernathy the next day and how supportive her playing partners were of the situation.

Once she got past Abernathy’s absence, she was able to focus on her game. However, she kept pulling her drives, which she slowly realized as the invitational went along.

“And I couldn’t really figure out how to fix it,” Hayden said. “As time went on it got better. So I think just practicing more and being focused during practice will really help.”

Given the conditions, both Hayden and Birk pointed to perseverance being a focal point to playing through a “pretty tough course.”

“No matter the circumstances, you always have to work hard and try your best,” Birk said. “Even if it’s hot (and) you’re sweating, just work hard.”