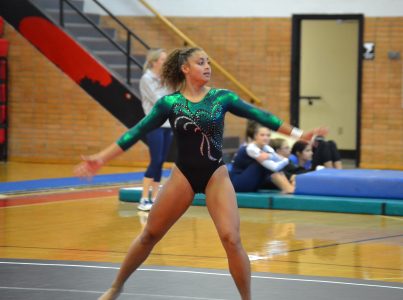 Free State’s gymnastics team had a new top performer in the third meet of the season.

Talia Gay, who won the all-around state title last fall, had finished first or second in the all-around rankings in each of the first two meets. She then suffered an injury early in the Free State Invitational Saturday afternoon at LHS, which meant the Firebirds would need someone else to step up to the challenge.

FSHS freshman Zoe Williams did just that, notching third place in the all-around rankings with 33.900 points. The Firebirds finished third as a team.

“My teammates helped me out, and just the positive atmosphere (was the key),” Williams said. “Vault was pretty good. I stuck my vault, and it was a good day.”

Williams has been competing in gymnastics since she was 3-years-old, so the transition to the high school level has been a smooth one. But Saturday’s showing was a testament to Williams taking a year off from the sport entirely last year.

As a result, Williams has come more focused and ready to display her skills.

“A lot of girls get to this age and they need a break,” coach Katrina Farrow said. “I think she’s really excited about having fun and getting to own her skills. She can make her own choices as far as her routines.”

To begin the day, Williams notched seventh in vault with a mark of 8.600.

“It has taken me a bit to come back in and get my skills right,” Williams said.

Williams was one of multiple athletes to shine this past week. Here is a look at the rest of the top area athletes:

Corban Oberzan recorded an interception to stall a drive by Shawnee Mission East late in the first half in Lawrence’s 30-7 win. Oberzan also recovered a fumble in the second half, marking his second fumble recovery of the season.

Oberzan, who moved to safety from linebacker this fall, now has four takeaways through the first two games.

Free State’s top singles player rolled through the Salina Central Invitational for a first-place finish in the singles bracket. VanPelt claimed four match victories en route to her individual title. She won three matches by an 8-0 margin, while earning an 8-1 victory in the semifinals.

In a 42-6 win over Louisburg, Tonganoxie senior Connor Searcy contributed on both defense and offense.

Searcy led the THS defense with 12 total tackles, including 10 solo stops. Junior Heston Robbins was the only other Tonganoxie defensive player to record more than five tackles, notching seven stops.

The Chieftains also ran for 275 yards on 39 carries behind a Searcy-led offensive line.

The Seahawks were led by a hat trick from freshman forward Beck Oldridge in the 6-5 win. Oldridge delivered a strike with his left foot during the 36th minute, which served as the game-winning score. Oldridge even had an assist on a goal by Evan McHenry.