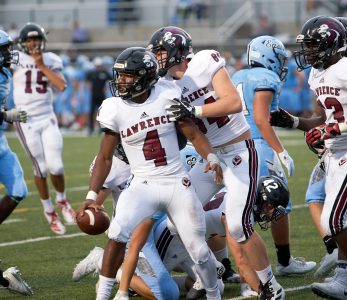 LHS junior running back Devin Neal (4) looks toward his teammates as he celebrates his touchdown with teammate Bryce Smith during a game against Shawnee Mission East Thursday night at Shawnee Mission North Stadium on Sept. 12, 2019.

It took over 20 hours for the Lawrence High football team to get the result it wanted, but it proved to be well worth the wait.

LHS picked up right where it left off from the night before, when the game was postponed due to inclement weather midway through the first quarter, during a rare Friday afternoon matchup with Shawnee Mission East at Shawnee Mission North stadium. The Lions maintained their early lead en route to a 30-7 victory over the Lancers.

With the win, Lawrence is now 2-0 to start the year after posting an 1-8 record in the first year under head coach Steve Rampy. For context, LHS suffered a 43-13 loss to Shawnee Mission East in Week 2 of the 2018 season.

“We didn’t have the same intensity today that we did yesterday,” Rampy said. “But we did OK. We had our moments. We made some mistakes, but we are 2-0.”

The Lions struck first on a 4-yard touchdown run by Devin Neal and appeared poised for more before the game was ultimately postponed due to Mother Nature.

When play resumed Friday afternoon, junior Tre Jackson got the first snap at quarterback and converted on 3rd-and-10 with an 11-yard run in the red zone. A few plays later, Connor Gellender’s field goal attempt was blocked. He later missed another field goal attempt.

The score remained the same, however, as Lawrence’s defense stifled the Shawnee Mission East offense. Junior linebacker Karson Green made a number of plays, while senior linebacker Cole Morris and senior defense end Nick Ray brought pressure off the edge on a consistent basis.

Shawnee Mission East only gained more than 3 yards on five of its 26 rushing attempts, which was a testament to the stellar play by Lawrence’s front seven of Nick Ray, Dylan Gillespie, Teagan Flynn, Austin Hollins, Cole Mondi, Green and Morris. Junior defensive end Preston Greenwood also came up with a crucial stop in the first half.

The LHS offense found the end zone again with an impressive drive late in the first half.

Lawrence put together a 69-yard drive on six plays in a matter of 31 seconds to take a 14-0 advantage. Quarterback Jackson Dooley threw a perfect ball under pressure, connecting with senior tight end Bryce Smith for a 4-yard touchdown with 54.5 seconds remaining.

Oberzan then snagged his first interception on the next drive to prevent a response by Shawnee Mission East.

“We have the ability to be a quick-strike team,” Rampy said. “When we are clicking on all cylinders, we have a lot of weapons. It was a good way to end the half.”

Lawrence’s defense continued to dominate in the second half. Oberzan recorded another interception and recovered a fumble. He now has four takeaways, including a defensive touchdown, through two games.

Hollins took an interception 55 yards to the house late in the third quarter, stretching the Lions’ lead out to 21 points. The Lancers quickly answered with a kick return, though the visitors never wavered.

Neal shouldered the load on the offensive side of the ball. He ran for 168 yards and two scores on 27 carries, which was made possible by the blocking of Noah Smith, Acen Villegas, Porter Dannevik, Lane Luna and Drew Meyer on the offensive line.

Lawrence will travel to Gardner-Edgerton at 7 p.m. Friday.