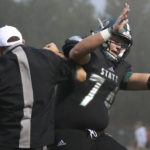 It didn’t take long for the group chat to start blowing up.

Senior left tackle Turner Corcoran was the first to send a message in the offensive line group chat, which occurred on the same night Free State rolled to a 45-19 win over Olathe West in the season opener. The sentiment across the unit was that they could do better.

Even though the offense scored on its first four possessions of the season, and the game was never in doubt after that, the Firebirds believe that the final score could have been even more lopsided. Free State’s offensive line committed numerous holding penalties, which stalled multiple offensive drives.

“If we trim those down, we are going to score two or three more times in that game,” Corcoran said. “That also takes us out as a group in the fourth quarter. It is just going to be a lot easier to get a win after that and not put stress on the coaches overall.”

But that is to be expected in the first game of the season, particularly for a unit that lacks a ton of varsity experience. Corcoran, a Nebraska commit, is one of two returners on Free State’s offensive line. Senior Ryan Lutz, who moved from right tackle to left guard this year, is the other veteran.

The Firebirds have the talent upfront to impose their will, but this unit is still gelling.

Senior right tackle Frankie Calderon got some experience at the end of last year, but that was at left tackle when Corcoran was injured. Junior right guard MJ Issa is settling in after playing at Lawrence High last year. Center Tyler Gourley is manning the middle of the line as a sophomore. Senior Charles Amaro also got some playing time in the first week.

As a result, Free State’s offensive line is far from a finished product. And that is why the group chat was buzzing Friday night.

“There is a lot we have to improve on,” Lutz said. “Everyone has known each other (for a long time), so we get on each other and make each other better. That’s the kind of chemistry you have to have.”

Yet there were plenty of positives from Week 1, too. After all, the group paved the path for two rushing scores on the first two drives of the game. On the first play, junior running back Tyler Bowden even ran past a perfect hole that could have been a touchdown.

Bowden eventually found the holes and ran for 174 yards on 18 carries. As a team, Free State averaged 9.5 yards per play in the first game of the Kevin Stewart era. FSHS also committed 13 penalties on the night, a lot of which were holding calls.

“Other than the penalties, we pretty much did what we wanted to offensively,” Stewart said. “We blocked some plays really well on Friday. They do really well at times, and then other times they are confused. That will come with game experience.”

Stewart is confident that his offensive line will have better days, particularly given the talent on the left side. Corcoran, the top-ranked recruit in the state, has worked as hard as anyone in the offseason to make the most of his senior campaign.

“I’m most impressed with his work ethic,” Stewart said of his 6-foot-6, 285-pound tackle. “For a kid that already has accolades and scholarship opportunities, the fact that he continues to work hard, didn’t miss a day of weights and is a leader. He wants to win. That really shows his character and that he’s a good football player.”

Lutz, who is 6-foot-1, 265 pounds, has aspirations of playing at the next level as well. He visited Benedictine last weekend, and attended multiple collegiate camps this past summer. Part of the reason Lutz switched to guard was because that is what he intends to play after high school.

It also allowed two lifelong teammates to close their Firebird careers out together. Since they started playing football in the second grade, Corcoran and Lutz have been side by side. Back then, Corcoran was at right tackle and Lutz was at right guard.

“It is pretty special,” Lutz said. “Me and Turner have always been tight. It is good to be next to him again.”

With the help of that Firebird tandem, Free State’s offensive line hopes to keep making strides throughout the season.

“If we can dominate on the left side, then we feel like we can win any game,” Corcoran said. “It doesn’t matter who we are playing in the state.”

Free State will take on Olathe East (0-1) at the College Boulevard Activity Center at 7 p.m. Friday.

Every single area football team kicked off the season at home last week. So it only makes sense that all the area squads will now be on the road.

Lawrence High played a Sunflower League contest on the road Thursday night, but the rest of the teams will be in action on Friday. Tonganoxie (1-0), which is coming off a 49-28 victory over Basehor-Linwood, will now travel to Louisburg. The Wildcats dropped a 27-24 decision to Spring Hill in the opener.

Perry-Lecompton (1-0) cruised to a 68-0 victory over Royal Valley last week and will now face a Holton team that suffered a 7-0 loss to Jefferson West in Week 1. Eudora and Baldwin will both try to bounce back losses in the first week. Eudora travels to Bonner Springs (0-1), while Baldwin heads to KC Piper (1-0).

Predictions: Tonganoxie over Louisburg, KC Piper over Baldwin, Bonner Springs over Eudora and Holton over Perry-Lecompton.

Free State’s gymnastics team claimed its first win of 2019 during the second meet of the season, which took place Wednesday night at Lawrence High. The Firebirds scored 99.050 points as a team to come away with the victory, while the Lions claimed third with a score of 92.250.

Free State’s Zoe Williams claimed third in the all-around rankings with a total score of 32.750. She placed third in both bars and floor with scores of 7.200 and 8.650, respectively.

Both teams will compete in a tournament at 11 a.m. Saturday at LHS.

Bishop Seabury’s first home soccer match of the year will have to wait another day.

Thursday’s match between BSA and Heritage Christian Academy was postponed due to inclement weather. The match will now take place at 5 p.m. Friday at the YSI Fields. The Seahawks (0-2) are still looking for their first win of the year after suffering an overtime defeat earlier this week.

Lawrence High’s volleyball team came away with one win and one loss in a triangular at Ottawa on Thursday.

Gianna Cooper led the way with nine kills, while Ashley Wildeman and I’yawa Brewer each had nine. Hadley Bird paced the team in digs with 16. Keely English has 18 assists, while Brenna Schwada posted 14.

Free State’s volleyball came up on the losing end of a road dual Thursday night.

Free State dropped all three sets at Blue Valley West to fall to 2-4 on the year. The Firebirds dropped the first set by a 25-22 margin before suffering a 25-16 loss in the second set. The third set was the closest, though FSHS was handed a 25-23 defeat.