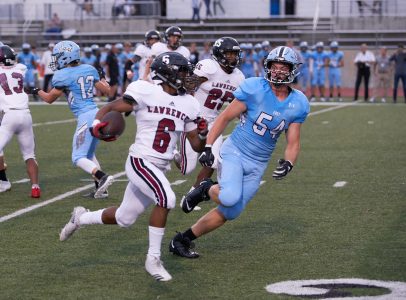 A lightning delay in the first quarter proved to be the only thing that could slow down LHS at the start of its matchup with Shawnee Mission East, which was ultimately postponed due to inclement weather. The game will resume at the same location at 3 p.m. Friday, with Lawrence leading by a 7-0 margin at the 5:29 mark in the first quarter.

The Lions will be facing a 3rd-and-10 on the opposition’s 18-yard line when the Sunflower League clash resumes. The lightning delay paused action at 7:15 p.m., and the decision to postpone the game was made at 8:07 p.m. after the lightning never seemed to stop.

“I told them before the game started that we were going to have lightning delays,” LHS head coach Steve Rampy said. “It doesn’t matter, we can’t control that. Don’t focus on that. I don’t want anybody whining about this. It is just a part of it.”

But it was about as good of a start as Lawrence (1-0) could ask for in its first road contest of the year. Junior kicker Connor Gellender booted a perfect kick to force a return by the Lancers, which was immediately stuffed by senior linebacker Cole Morris.

“It was a good start defensively,” Rampy said.

LHS then handed the ball to junior running back Devin Neal three consecutive times. On the third attempt, Neal punched it in from 3 yards out to help Lawrence take a 7-0 advantage at the 10:04 mark in the first quarter.

The Lions responded by forcing the Lancers (0-1) into a three-and-out on the next possession. Lawrence’s front seven of Nick Ray, Dylan Gillespie, Teagan Flynn, Austin Hollins, Cole Mondi, Karson Green and Morris prevented Shawnee Mission East from gaining more than 5 yards on a play on the first two drives.

Lawrence then appeared on its way to stretching out that lead before Mother Nature got in the way. Neal carried the ball five more times, gaining positive yards on all five carries behind strong blocking from Noah Smith, Acen Villegas, Porter Dannevik, Lane Luna and Drew Meyer on the offensive line.

Quarterback Jackson Dooley and receiver Chris McGee even linked up for a 6-yard connection on third-and-6 to keep the drive alive. Graham Hough’s carry was the first negative play by the Lions, setting up a third-and-10 on the opposition’s 18-yard line with 5:29 left in the first quarter. That is when both teams were forced to the locker room because of lightning.

“We can control how we come back and play,” Rampy said. “That is all we have to think about doing.”