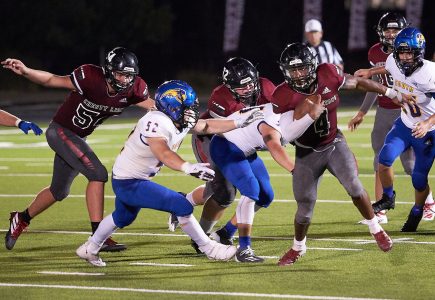 It didn’t take long for Lawrence High to get on the scoreboard in the 2019 season, as the Lions recovered its opening kickoff on the Olathe South 6-yard line. Junior quarterback Jackson Dooley promptly ran the ball into the end zone on third-and-goal, and LHS was quickly on the board at the 11:00 mark.

And while that initial surge may have been indicative of an explosive offense, LHS held on for a 31-21 victory over Olathe South to open the season.

For the remainder of the first quarter, LHS couldn’t recapture the magic of that first drive, committing four penalties and failing to gain a first down. The closest came on an apparent 28-yard touchdown pass to senior wide receiver Chris McGee that was called back for offensive pass interference.

“I think (the opening touchdown) kind of gave us a false sense of (momentum),” LHS head coach Steve Rampy said. “The same thing happened last year against these guys; we scored on the first play of the game and we kind of took a breath.

“I think we did that a little bit tonight and lost our concentration.”

And the second quarter showed more difficulties, as Dooley’s pass was tipped at the line and landed in the hands of Olathe South senior linebacker Tony Lunson, who returned it for a 40-yard touchdown to tie the game 7-7.

LHS responded with its best offensive drive of the first half, with four first downs and back-to-back catches from McGee (22 yards) and junior running back Graham Hough (20 yards) to bring the Lions into the red zone.

However, the offense stalled once again and the Lions had to settle for a 31-yard field goal from junior kicker/punter Connor Gellender.

But as had been the case all night, the Falcons had an answer, as wide receiver Blaize White lived up to his name with a 93-yard kickoff return for a touchdown, exacting revenge from the opening kick.

LHS junior linebacker Corban Oberzan managed to pick off a pass from Olathe South quarterback Reed Smith, but the Lions went three-and-out for another punt.

The Falcons took that 14-10 lead into halftime after muffing a 37-yard fake field goal attempt as the clock expired, leaving LHS looking for offensive answers.

Coming out of the break, it looked like LHS may be turning the corner with a couple first downs and gains from McGee (12-yard catch) and junior running back Devin Neal (18-yard run). But once again the drive stalled, ending with a punt from Dooley.

It was the same fate for Olathe South who managed to get down the field in a hurry thanks to junior running back Andrew Nehrbass, yet ended the drive on a missed field goal from junior kicker Adam Young.

As was the case in the first half, penalties held up both teams, with LHS committing 13 penalties (104 yards) and Olathe South committing four penalties (30 yards).

“Way too many mistakes, too many penalties,” Rampy said. “We’ve got to eliminate that.”

The third quarter found stalled drives for both sides, which just increased the aggressive play in the fourth and final quarter.

For LHS, that came in the form of a 27-yard pick-six from former quarterback turned wide receiver/defensive back junior Tre’ Jackson, giving the Lions much-needed momentum with 8:10 to go in the game.

“Our defense was fabulous all night long,” Rampy said. “They didn’t do much in the first half against us. We are really fast, physical and I was really proud of our defense.”

On the next LHS drive, the Lions continued to feed Neal, who ripped off multiple runs into the red zone, resulting in a four-yard run for a touchdown to extend the lead.

And when Olathe South tried to respond, Nehrbass fumbled at the line, which was scooped up by Oberzan for a 48-yard touchdown.

The Lions held amidst a strong Falcon rushing attack and self-inflicted wounds from penalties.

“I’ve told these guys, ‘We’re not good enough to take a breath,'” Rampy said. “We’ve got to come with a sense of urgency every day. As long as we have that, we’re going to get better every day.”

Next week, LHS goes on the road to take on Shawnee Mission East. Kickoff is set for 7 p.m.