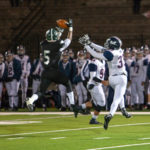 There is nothing quite like the first week of the football season.

It has been a long summer, so I’m beyond ready for the first Friday night under the lights of the 2019 season. And I’m sure that I’m not the only one. This fall figures to be another exciting season in the area football scene with many teams poised to have success on the gridiron.

Free State will have a new coach this year, but this is a program that has made the 6A quarterfinals in each of the last seven seasons. Behind a talented junior class, Lawrence High might surprise some people after a 1-8 campaign in 2018.

There are plenty of athletes and storylines to watch in 2019, including some that we don’t even know about just yet. With that, let’s take a look at the top storylines regarding the area football squads entering the season:

Gone are playmakers Keenan Garber and Jax Dineen, who are now with Kansas State. But the Firebirds still have a number of players that are going to play at the next level.

Senior lineman Turner Corcoran, a Nebraska commit, is the top-ranked prospect in Kansas. Senior receiver Marcus Preston, who transferred back to FSHS from Mill Valley, will be a force in the passing attack. Senior defensive lineman Lovette Epelle and senior linebacker Joey Eddis will make it tough for opposing offenses to score this season.

And Malik Berry, a senior linebacker, has already made things difficult for Free State’s offense in practice.

“He’s an outstanding high school linebacker,” head coach Kevin Stewart said. “He’s fast and he’s been kind of destroying us at practice. In my opinion, he’s basically a Division I linebacker playing against high school guys.”

The Firebirds have a total of 10 starters back in 2019, five on each side of the ball. Ryan Lutz (OL), Kyle Flachsbarth (OL), Frankie Calderon (OL), Devon Buck (DL) and Ben Miller (LB) are all back this fall.

The talent and experience should make the coaching transition much easier for Stewart, who enters his first season at the helm. FSHS plays host to Olathe West at 7 p.m. Friday.

Watch out for Lawrence High

Lawrence is capable of making a leap this fall, because there are some potent players on this squad. Junior running back Devin Neal, who scored on the first offensive play of last season, will lead a talented backfield that also includes junior Graham Hough.

Junior quarterback Jackson Dooley will have plenty of talent around him this fall, including senior receiver Chris McGee. Junior Tre’ Jackson, who played quarterback most of 2018, will have a role on this offense as well.

LHS will have to replace a lot of production on the defensive side of the ball, but junior linebacker Cole Mondi will wreak havoc on opposing teams. Juniors Kallun Chitama and Jackson, along with senior Dre’ Bridges, will all be involved in a talented secondary as well.

“We think our stand up guys around the defense will be really fast,” Rampy said.

Despite a 2-7 record in 2018, Baldwin has plenty of talent for first-year head coach David Bowen.

Look no further than running back Connor Quick, who will shoulder the load on the offensive end. Quick carried the ball 25 times in a win over Eudora last fall, and that could be the typical output for him on a weekly basis during his senior season.

Senior middle linebacker Alex Burg will attempt to lead the team in tackles, while senior defensive end Trysten Heck is poised to follow up a strong junior campaign. Baldwin plays host to Ottawa at 7 p.m. Friday at Baker Stadium.

The first year under Sean Hayden ended in a 1-8 record for the Cardinals.

But Eudora has the pieces this fall to do better, starting with Hayden’s younger brother. Sloan Hayden, who is 6-foot-5, 235 pounds, transferred from Ulysses to play tight end and defensive end for Eudora. Hayden is committed to Missouri State, but has recruiting interest from DI programs.

Tonganoxie back for more

Don’t ever count out the Tonganoxie football team.

After back-to-back losses to begin the season, THS won sevens games in a row and ended up with a league title in its first year in the Frontier League. Even though the Chieftains have to replace a majority of their rushing production, as well as their quarterback, they return eight starters on offense and seven starters on defense.

Cole Sample, who is 6-foot-3, 285 pounds, will be a key player on both sides of the ball. He was an all-state lineman that also recorded 72 tackles last year. Leading receiver Elijah Tyner is back, while senior linebacker Dustin Rhoads will be crucial to the team’s success on defense.

Replicating the success of the last two years will be a daunting task for Perry-Lecompton.

The Kaws return just two offensive starters and four defensive starters from a team that went 7-3, ending with a loss to Sabetha in the second round of the playoffs. Junior linemen Hayden Robb and Sean Urban are the only two returning starters from an offense that averaged 37 points per game in 2018.

PLHS also has a challenging schedule, as it plays in the Big 7 conference. This team could still reload under head coach Mike Paramore. After consecutive seven-win seasons, Paramore now has a 91-84 record entering his 19th year with the Kaws.

Perry-Lecompton will play host to Royal Valley at 7 p.m. Friday.