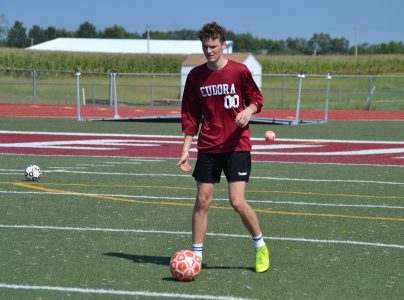 Eudora junior William Sangill competes in a drill during practice Monday morning at EHS on Sept. 2, 2019.

Eudora’s William Sangill didn’t want to show any emotion, so he took a moment to dump his water bottle on his head.

The junior goalkeeper had just surrendered a goal in the 22nd minute, allowing Bishop Seabury to take a 1-0 lead in the season opener. It was not the start that Sangill had envisioned when he moved to Eudora from Denmark in early August.

“I was just thinking that this is my first game,” Sangill said. “This is not how people should think I play.”

But Sangill was able to keep his composure in the net, and turned in a spectacular debut to propel the Cardinals to a 4-2 victory over the Seahawks Friday night at EHS. Sangill recorded 11 saves, though he was challenged by an aggressive Bishop Seabury offense all night.

The Seahawks fired off 16 shots, including 13 shots on goal. Sangill stood tall in the net, however, and thwarted multiple attempts to help Eudora start off in the win column. Yet EHS head coach Darren Erpelding wasn’t surprised by Sangill’s showing.

“He had a good night, he had to face too many shots,” Erpelding said. “I don’t worry about many of my keepers ever because our keeper trainer does a fantastic job of making them mentally tough.”

Erpelding figured Sangill would have a role when he joined the program, though he wasn’t sure how quickly the Cardinals would need his services. And that is a credit to Sangill’s performance in the preseason.

Sangill, who is originally from Denmark, arrived in Eudora in early August as a part of a foreign exchange student program. It was a process that Sangill’s father went through when he was a senior in high school in Utah.

“I just thought it was so cool to be able to live here for 10 months away from your family,” Sangill said.

Sangill was sent to Eudora at random, and was welcomed by a host family that lives close to the school. Sangill, who has been playing soccer in Denmark since he was 9-years-old, contacted his host parents, Jennifer and Gustav Riemer, about the possibility of playing soccer at EHS.

Even though he’s only been around for a few weeks, it hasn’t taken long for Sangill to become a part of the team. He’s one of two foreign exchange students on the team along with junior Matheus Sande. They are both members of an 18-player junior class for the Cardinals.

For Sangill, his lone season in Eudora is all about making the most of this opportunity and enjoying every moment with his team this fall.

“I don’t really want to accomplish something,” Sangill said. “I just want to have my experience here in America.”

So what has been the best part of the experience thus far? Well, Sangill was blown away by the support the soccer team received in the season opener.

“I’m not used to all the people. Here the whole school and town come to the games,” Sangill said. “I loved it. Looking up in the stands and seeing people enjoy the game, especially when you play well. That helps.”

A little over a week before the start of his junior campaign, Lawrence High running back Devin Neal was on KU’s campus for an unofficial visit during the Indiana State game.

Neal, who picked up an offer from the Jayhawks this past summer, tweeted a graphic of him in a Kansas uniform this past weekend. Neal scored on the first offensive play of the 2018 season during a 1-8 campaign by the Lions.

Kesten’s teammate, Shannon Clarke, has also had a successful summer in regards to recruiting.

Clarke, who will be a junior this winter, recently announced on Twitter that she has received a scholarship offer from Colorado State. Clarke paced the Firebirds in scoring with an average of 12.9 points per contest last season.

Last Friday, Birk announced via her personal Twitter account that she is verbally committed to play golf at Friends University. Birk helped the Firebirds place ninth at the 6A state girls golf meet last fall.

After a season-opening loss at Manhattan, Lawrence High’s boys soccer team bounced back with a 2-0 road win over Topeka High.

Kanak Masten scored both goals for the Lions, who improved to 1-1 on the year. Masten now has the only two scores on the young season for Lawrence. LHS will turn its attention to a Sunflower League foe.

Lawrence will play host to Shawnee Mission East at 6:30 p.m. Thursday for its first home match of the fall.

The first game of the Hussam Mohammed era didn’t go quite as planned.

Free State dropped a 2-0 decision at Olathe South, despite the team putting a lot of effort into the season opener. The Firebirds (0-1) just couldn’t find the back of the net, though they plan to recover later this week.