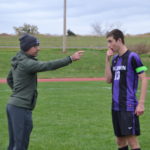 In a battle between two area teams, Eudora’s boys soccer squad bested Bishop Seabury by a 4-2 margin at EHS. It marked the second year in a row that the Cardinals claimed the season opener against the Seahawks. But both teams had plenty of positives from Friday’s tilt.

Lawrence High’s boys soccer team dropped a 2-0 decision at Manhattan, a team that finished as a runner-up in Class 6A in 2018. Yet the Lions have plenty of potential on this year’s squad and could improve on their 6-9-2 clip from a year ago.

Tonganoxie fell in a close match in its season opener, suffering a 2-1 loss to Kansas City Christian at THS. Cuyler Kietzman scored the lone goal for the Chieftains in the first match of the year.

While only one team started off in the win column, this season has a chance to be an exciting one for multiple area boys soccer squads. With that, let’s take a look at the top boys soccer storylines in 2019:

Head coach Hussam Mohammed will kick off a new era for FSHS boys soccer this week, as the team travels to Olathe South at 7 p.m. Tuesday.

The talent is there for the Firebirds, and many of the seniors have been playing together for a long time. Ashton Owen, Oliver Frankenfeld, Hayden Robbins and Jacob Appleman are all key members of a tight senior class.

Free State will begin 2019 with three road matches against Olathe South, Seaman and De Soto. The team’s first home tilt will be against Shawnee Mission North on Sept. 17.

2018 was a season to remember for Bishop Seabury’s Harrison Hartzler.

As a sophomore, Hartzler scored 19 goals from the right wing position and was recognized as Journal World’s Player of the Year. His athleticism has always been something special, but Hartzler put in the work this offseason to do even better this fall.

Hartzler will play outside back for the Seahawks, who went 9-3 last season before injuries prevented a potential deep run in the playoffs. BSA will have to replace six starters, but it brings back plenty of production.

“We are introducing a new formation, which will help us better utilize our players’ skill set,” fifth-year head coach Ivo Ivanov said. “But it might take a couple of matches before everyone starts reading (on) the same page.”

Bishop Seabury (0-1) will travel to Pembroke Hill at 6 p.m. Thursday.

The Bulldogs, who went 12-5-2, finished one match shy of making it to the state tournament. Baldwin will have to reload in order to replicate that level of success, as it will have to replace 10 seniors from last year’s squad.

But there are some talented players on this team. Senior defender Jordan Barth, who is also a captain, started every game last year for one of the best defenses in Class 4A. Senior midfielder Tyler Wales is also back after starting every match last season.

Junior Grady McCune, a two-time All-Frontier League selection, led the Bulldogs in assists with 10 in 2018. Caden Prather, a senior defender, is fast and can attack from the back. Sophomore defenders Devin Prather, Francisco McGuinness and Michael Garber are all expected to make the leap from junior varsity.

“Even though we lost a lot of quality players and experience, our expectations are high,” fourth-year head coach Matthew McCune said. “We have (a) schedule that will give us some excellent competition and prepare our young squad for the postseason.”

Eudora poised to take another step

As the only area team currently in the win column, the Cardinals have plenty of reason to be optimistic about their chances in 2019.

Last season, Eudora went 9-7-2 to record its first winning record in program history. The Cardinals bring back plenty of experience, including 18 juniors who will compete for varsity action.

Senior captain Caden Willits, who was a second-team all-state selection as a junior, will embrace a leadership role. Senior center back Brant Arnold is ready to take another step in his final season. Junior forward Keaton Herron paced EHS in goals as a sophomore with nine scores.

Junior captain Dylan Meyer had an impressive campaign last year, in which he was named second-team all-state. After a five-score season, Alex Kooken should be more of a focal point this year at center forward. Daniel Grosdidier, Kale Breedlove, Camden Ridinger, Isaac Lewis, Jace McCormick and Colby Lawhorn are all key returners for the Cardinals as well.

In order to improve on its 6-9 record, Tonganoxie will have to win the close matches this fall.

The season opener didn’t go their way, but the Chieftains believe they have grown in late-game situations. Junior all-state defender Abel Mendoza should make scoring difficult for opposing teams, while senior forward Javier Tujillo has the speed and finishing touch to be a huge offensive threat.

Sophomore Grayson Sonntag, who had success as a wrestler last winter, will control the middle of the field as the team’s midfielder. Junior Jacob Howell will hold things down in the net as Tonganoxie’s goalkeeper.

“I believe this team will be more dynamic and even more fun to watch than a season before,” third-year head coach Jon Orndorff said. “You will see many different players step up in each game.”