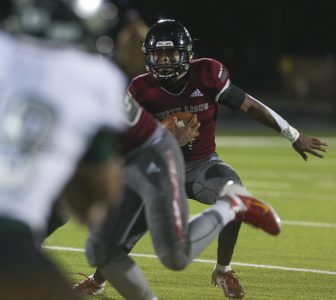 Lawrence High running back Devin Neal (4) rushes for yardage during a game against the Free State Friday night at LHS on Oct. 25, 2019.

The Lawrence High football team is in unfamiliar territory, at least for this season.

LHS is coming off a 31-30 loss to Free State in the regular-season finale, which marked the team’s lone defeat during what has been an impressive 2019 campaign. It was a result that caught the Lions (7-1, No. 4 in Class 6A) completely off guard.

“We were shell-shocked Saturday that we lost, because we shouldn’t have lost,” LHS head coach Steve Rampy said. “The bottom line is that I didn’t do a very good job last week. It falls directly on my shoulders.”

But that Week 8 result hasn’t changed Lawrence’s expectations for the 2019 postseason, even if it is likely a tougher path following the narrow defeat.

“To all of us, we are still the best team in Kansas,” junior linebacker Cole Mondi said. “Week 8 really humbled us and helped us see that we are not bulletproof. If we play like how we played in Week 8, we are going to get beat.”

LHS is now the fifth seed in the 6A West, which means it will host just one playoff game barring any upset. The Lions will square off with Washburn Rural (3-5) at 7 p.m. Friday in the opening round.

This postseason has a much different feel to it compared to last year, when LHS was 1-7 and had to travel to face eventual state champion Derby in the first round. In a lot of ways, though, that 41-7 loss in the opening round last year has helped fuel this impressive turnaround.

And that is why the narrow defeat in last week’s City Showdown could be the very thing that helps LHS refocus when the result is even more important.

Players are dealing with nagging injuries, as is usually the case during this time of the year. Temperatures have also dropped during practice, but players have brought even more energy this week.

“(Monday), we came out with the most hype and most juice in awhile,” Mondi said. “We are ready. Week 8 is over. It is postseason now, so we are all in.”

Lawrence is solely focused on Washburn Rural, which has notched all three of its wins in the last four weeks. The Junior Blues will lean on the ground game behind a quirky offense, which averaged 44 points per game in October.

Still, regardless of last week’s outcome, the Lions believe they are capable of a deep postseason run.

“We think we can make a serious run at this,” Rampy said. “That’s what we have been preparing for all year.” 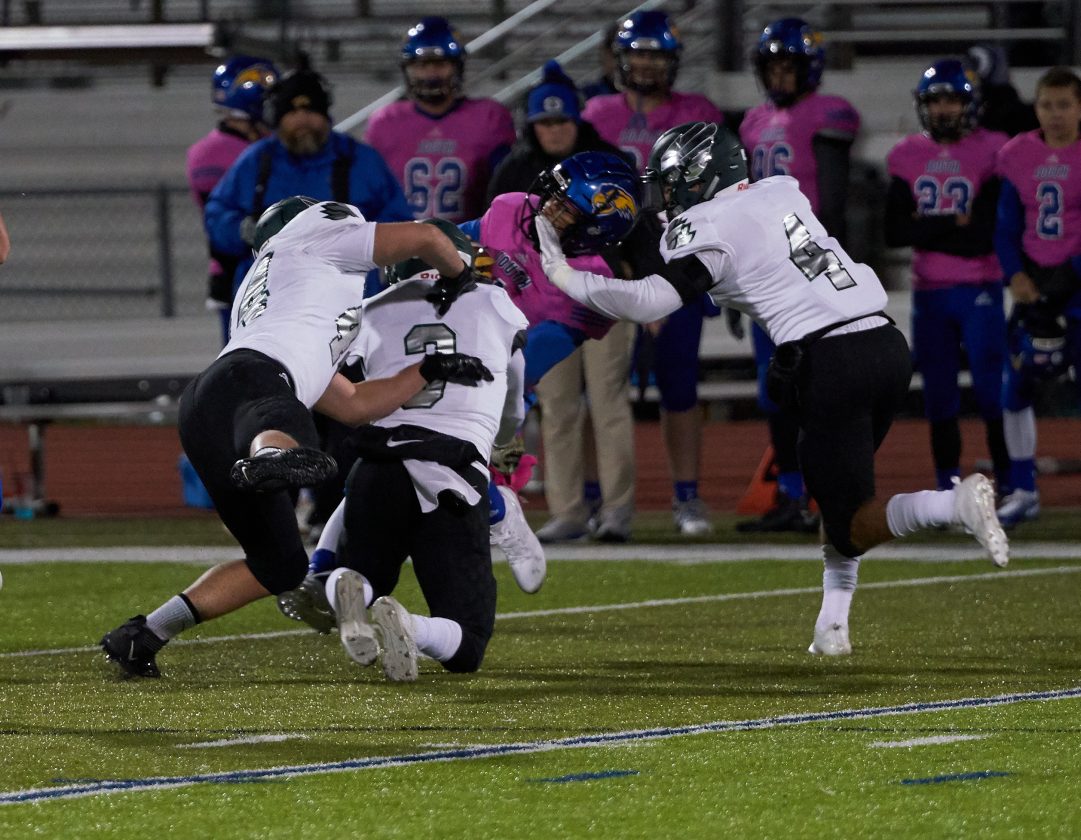 It was a day that Free State senior Joey Eddis won’t soon forget.

Eddis got to be on the sideline during Clemson’s 44-16 win over Alabama in last year’s national championship game. He also watched the Tigers topple Notre Dame in the semifinals in Dallas, while competing in a wrestling meet in between the two games.

Being on the sideline for the big game was an eye-opening experience for Eddis, who will join Clemson as a preferred walk-on next year.

“It was crazy,” Eddis said. “Those Alabama guys and those Clemson guys were some of the biggest guys that I have ever seen. It was just top-notch football. It was definitely a crazy experience, probably once-in-a-lifetime. It was awesome.”

Eddis has been a Clemson fan ever since his uncle, Brent Venables, joined the staff in 2012. Venables is the defensive coordinator for Clemson, which has won two national titles in the last three years.

But last year’s experience helped Eddis realize that he has to get much stronger before playing at the collegiate level.

“It made me open my eyes, and realize I need to start working harder,” Eddis said. “I need to get a head start to start catching up to some of those guys.”

That is exactly what Eddis did during the offseason heading into his final high school campaign.

Eddis spent a month down in South Carolina this past summer, working with his two cousins, who are also on the Clemson roster, to help improve his game. Eddis also got stronger, adding 70 pounds to his max on bench press from what it was at the end of wrestling season.

It has all led to a strong final season for Eddis, who has 31 tackles (25 solo stops) on the year. He leads the team with four sacks and has recorded eight tackles for loss. Eddis has also broken up three passes in coverage.

“He’s a really good football player,” FSHS head coach Kevin Stewart said. “I didn’t realize how smart he was coming into the season. He’s a very intelligent football player. I’m impressed with his awareness out there and his ability to make plays.”

Eddis has been an integral part of a Free State defense that has been strong all year.

The Firebirds, who are 7-1 and ranked No. 3 in Class 6A, have allowed an average of 18 points per game. Lawrence is the only team to score more than 28 points against FSHS this season, which took place in Free State’s 31-30 win last week.

Free State, which is the fourth seed in the 6A West, is on a six-game win streak entering the postseason. The Firebirds will host Wichita South (3-5) in the opening round, though they have their sights set on a deep postseason run.

“Since the beginning of the season, the goal has been a state championship,” Eddis said. “We have a couple tough teams in the early rounds, but we’d have to play them eventually.”

Kickoff is slated for 7 p.m. Friday at FSHS.