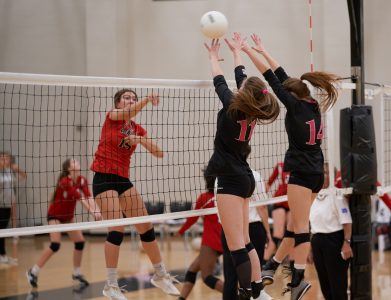 All in or all out.

That has been the motto of the Free State volleyball team since the first day of summer workouts. It is a slogan that was introduced by head coach Jayme Savage when she took over the program after being the team’s assistant coach for nine years.

And it has helped define the Firebirds all year en route to their first state berth since 2016.

“It is just a way to develop that athlete on the mental side and it is very true,” Savage said. “It took some practice time to really embrace what it stood for, but it honestly happened from the get go.”

But that’s exactly why the Firebirds are not just satisfied with a trip to the Class 6A state tournament, which will begin Friday at Tony’s Pizza Events Center in Salina. They want to make it to the second day, even if they are in a tough pool.

The top-four teams between the two pools will advance to the second day, which will begin at 2 p.m. Saturday. Gleason and senior Kaitlyn Hamilton were on the 2016 squad, which went 2-1 on the first day but just missed out on advancing to the second day of the state tournament.

As a result, that is the first order of the business for the Firebirds. And it will take being all in as a squad to do so.

“If we leave our best on the floor then we won’t have any regrets about it,” said Hamilton, who is an Indiana State commit.

“It’s go time for us,” Gleason said. “For a lot of us, this is our last time playing volleyball ever.”

The Firebirds have the talent to go out in memorable fashion, too.

Duncan paces the team with 76 blocks, while Unruh has a team-high 266 digs this year. Gleason has 308 assists to lead the squad, and Arensberg is not far behind with 286 on the year.

Free State’s depth and talent prevailed during a sweep through sub-state action last weekend in Wichita East. FSHS took down both Wichita North (25-8, 25-6) and Wichita East (25-15, 29-27) in straight sets to notch a trip to the state tournament.

And the final set victory showed that Free State has enough determination to do something special this weekend.

“(Wichita East) had every opportunity to take it to three sets and we didn’t let that happen,” Savage said. “That showed a lot of grit and mental toughness. That took us to another level that day.”

There will be a rematch of the City Showdown in this year’s regional soccer championship game in the Class 6A playoffs.

Lawrence High, which was the 15th in the 6A West, upset No. 2 seed Washburn Rural to advance to the regional championship. The Lions (7-8-3) scored two second-half goals en route to a 2-1 road win over Washburn Rural Tuesday night. It came one day after LHS notched a 8-0 victory over Junction City in the play-in game.

The Firebirds, meanwhile, recorded a 3-1 road win over Liberal, which was also considered an upset based on seeding. Free State is the No. 10 seed in the 6A West with a 9-6-2 overall record, while Liberal is the No. 7 seed with a 11-5-1 clip.

Free State and LHS battled to a 0-0 draw in the regular-season meeting on Oct. 15. The regional championship will take place at 5 p.m. Thursday at FSHS. The winner will earn a spot in the Class 6A quarterfinals.

Sam Bayliss scored the lone goal for the Seahawks, who are the No. 2 overall seed in the Class 4A-1A East region. Bishop Seabury (11-5) advanced to the regional championship, where it will play host to Bishop Miege on Thursday at 4:30 p.m.

Bishop Miege took down Tonganoxie for a 6-1 win in the first round.

The Baldwin boys soccer team will also be playing for a spot in the Class 4A-1A quarterfinals on Thursday.

BHS, the No. 3 seed in the East region, earned a 3-1 win over Maranatha Christian Academy on Tuesday. Jordan Barth, Caleb Carr and Grady McCune all scored goals for the Bulldogs, who improve to 11-5-1 on the year.

Eudora rolls in opening round

It was never a doubt for Eudora’s boy soccer team, which cruised to a 10-0 win over Columbus Tuesday night at EHS.

Eudora (11-5-1) scored seven goals in the second half alone to advance to the next round. The Cardinals, who are the fifth overall seed in the Class 4A-1A East, will now face No. 4 Paola on the road Thursday night.