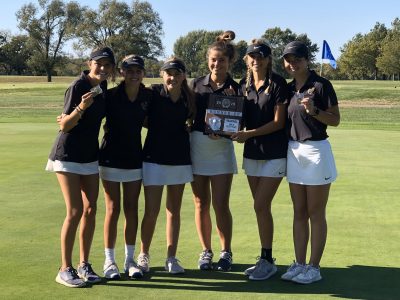 Free State's girls golf team poses with a runner-up plaque following the regional meet, which netted the squad its second consecutive trip to the state tournament. The Firebirds will begin the 6A state tournament at 9 a.m. Monday morning in Hutchinson.

Free State’s girls golf team has been preparing for the state tournament all year, even if it didn’t realize it.

The Firebirds have done a better job of getting more practice holes in on a daily basis this season. They have cut down their time on the driving range, working on specific situations throughout the course.

“We play faster than we used to,” senior Kari Rainbolt said. “Sometimes we get in nine holes, which we never did last year.”

The Firebirds have even put in extra time after practice, showing a commitment to their craft throughout the 2019 season.

“We have just been staying later,” senior Kate Lawrence said. “I feel like a lot of people have been putting in a lot of time outside of practice, especially on the weekends. I think that has been really important.”

All of that has helped the entire Free State girls golf team earn its second consecutive trip to the state tournament, which will begin at 9 a.m. Monday at Carey Park in Hutchinson. But this year’s state tournament will be different compared to last year.

This season’s tournament will be a two-day event, with players playing 18 holes on Monday and 18 more holes on Tuesday. In the past, the state golf tournament has just been one day.

The extra 18 holes could potentially help players overcome a few bad shots, though Free State has had a lot of success this season.

Free State finished second in the Sunflower League and claimed a runner-up finish at regionals. Sophomore Addyson Meadows has posted an averaged score of 89.4, which is the best clip on the team.

Senior Kennedy Birk, who is verbally committed to play golf at Friends University, has an average score of 90.8 this year. Claire Covert (96.6) and Lawrence (96.8) are also averaging less than 100, demonstrating the depth of the Firebirds.

“We had a lot of people coming back, but we also had a lot of new people this year,” Birk said. “It was a little different, but I felt like we had more confidence.”

Still, the state tournament will be the team’s toughest test yet. If the Firebirds can improve on their short game, though, they believe they are capable of ending the year on a positive note.

“Our goal is for each of us to do one stroke better than our best score,” Lawrence said. “We are all trying to make it be our best tournament so far.” 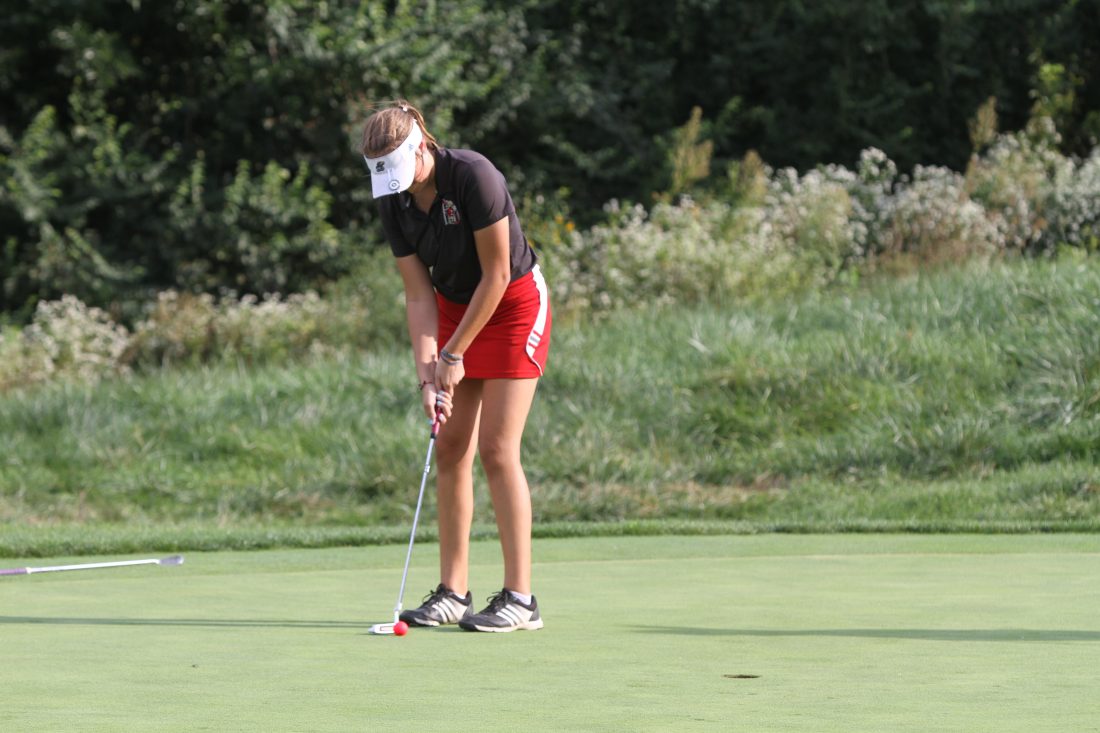 LHS senior Rylie Hayden lines up a putt. Hayden finished 38th with an overall score of 110 at the Lawrence Country Club Invitational on Monday, Sept. 16.

Lawrence High golfers Emma Parsons and Rylie Hayden will be looking to make it to the second day of the 6A state golf tournament.

A total of 54 golfers, which is a number that includes the top-six teams, will get to advance to the second day. Both Parsons and Hayden hope to play well enough in the first 18 holes to get the opportunity to play another 18 holes on Tuesday in Hutchinson.

“This year, I’m really hoping to qualify for day two just because it is new,” Hayden said. “That and just having fun again. I’m really focusing on having fun this year.”

Hayden, a sophomore, aims to build off last year’s performance in the state tournament. For starters, the conditions should be much better than they were last year when she went as one of three individuals for LHS.

Hayden has posted an average score of 103.5, which includes a low mark of 95, this fall. In terms of scores, Hayden had a better season in 2018. But Hayden has improved her putting, and she believes that will be enough to end her sophomore campaign with a good performance.

Parsons, who is a junior, will be competing in the state tournament during her first season as a member of the varsity team. It is actually just the second year that Parsons has even competed in golf at LHS.

The key to Parsons’ improvement has been her work in the offseason. Parsons worked for a golf course in Eudora this past summer, which allowed her to improve her driving. Parsons has posted an average score of 111.7, including a season-low of 105.

“When you compare it to last year, it was pretty rare for me to get a par,” Parsons said. “I just think overall I have been more motivated. I think everything overall has just improved.”

That growth has allowed Parsons to exceed even her own expectations for this season.

“I’m very excited,” Parsons said. “My goal was to go to regionals; I didn’t really see state as a possibility. I’m just really thankful to be going.” 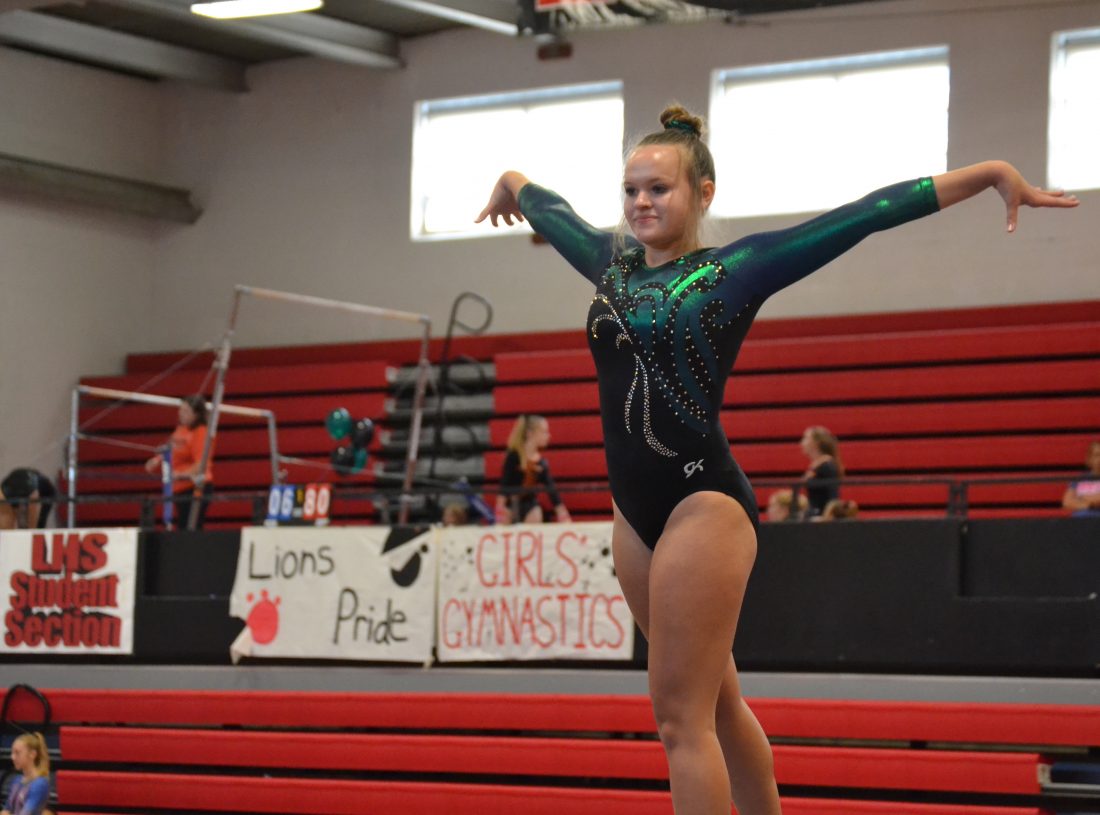 Lawrence’s Paris Spotted Tail was the highest city gymnast in the all-around rankings, coming in fourth with a score of 34.600. Free State’s Chaney Finkeldei notched 12th with a total score of 31.950.

Earlier in the week, a pair of city gymnasts shined at the All-Around Invite at Shawnee Mission South. Talia Gay of Free State took second place with a score of 35.950, while Spotted Tail placed ninth out of 34 athletes with a mark of 33.050.

The state gymnastics meet will take place at 11 a.m. Saturday at Olathe South.

Both city volleyball teams were in action at the Emporia tournament on Saturday.

Free State went 4-2 to take second place in the tournament, while Lawrence High went 2-4 to end up in seventh place.

The Lions then defeated Maize (25-21, 25-16) to finish in seventh place. Gianna Cooper led the team with 26 kills, while Asjah Harris recorded 25 kills on the day. Brenna Schwada paced the team with 55 assists. Hadley Bird tallied a team-high 86 digs during the tournament.

Both teams will be back in action during sub-state on Saturday.

Following a 0-0 draw in the City Showdown, Free State’s boys soccer team endured three matches in as many days.

The Firebirds went 2-1 during a three-day stretch that featured two road matches. Free State earned a 3-2 win over Gardner Edgerton at home Thursday before following that up with a 2-1 win over Kapaun on Friday in Dodge City.

FSHS then suffered a 3-0 loss to Dodge City on Saturday afternoon, moving its overall record to 7-5-2 with one week remaining in the regular season. Free State will travel to Shawnee Mission West at 7 p.m. Tuesday.