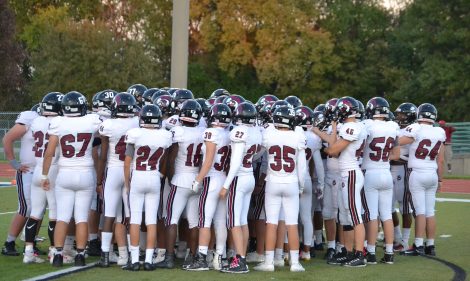 The Lawrence High football team huddles up before its game against Olathe North Friday night at Olathe District Activity Center on Oct. 18, 2019.

OLATHE — The defining moment of Lawrence High’s 35-10 win over Olathe North came well before it ever took the lead Friday night at Olathe District Activity Center.

It came before the Lions even scored a single point, and it ultimately led to a double-digit deficit in the opening quarter. LHS (7-0, No. 3 in Class 6A) forced Olathe North (5-2, No. 2 in Class 6A) to settle for a field goal on its second possession of the night.

“I think it made us believe that we can stop them,” LHS head coach Steve Rampy said. “We just dominated them the rest of the game. It is unbelievable how good our defense is.”

The Eagles, who were coming off a 77-point outburst in their win over Shawnee Mission East last week, started off this week’s clash in similar fashion.

Junior quarterback Arland Bruce IV, who had 1,096 rushing yards entering the night, piled up 85 yards on the first eight plays of the night. He scored on a 34-yard touchdown run to spot Olathe North a 7-0 advantage within the first 110 seconds of the contest.

But his ninth, 10th and even the 11th rushing attempt were completely stuffed by the LHS defense. Olathe North tried three runs with Bruce from the 1-yard line, and he ended up losing two yards. It forced the Eagles to settled for a field goal, taking a 10-0 lead with 3:53 left in the first quarter.

“That was huge. If they score that, that’s just demoralizing,” junior linebacker Cole Mondi said. “Our front, that’s the best game we played. The (defensive backs) were able to make an adjustment. That was amazing.”

LHS then scored 35 unanswered points, and completely dictated things on both sides of the ball from that moment on.

Mondi recovered a fumble in the second half to spoil Olathe North’s most-promising drive after the opening quarter.

“We just knew if we messed up, they were going to score,” Mondi said. “They did that in the first quarter. When we make adjustments, we are a really good defense and our offense can take care of it.”

The offense did just that, starting on its fourth possession of the game with a big-time throw from its signal caller. On fourth-and-18, LHS junior quarterback Jackson Dooley stared down a blitzing linebacker and hit a wide-open Devin Neal down the visitors’ sideline for a 37-yard touchdown pass.

“He made some really good plays,” Rampy said. “He missed some throws that he should have had, but that was a big one.”

One drive later, the Lions took the lead for good with another perfectly thrown ball by Dooley. On third-and-short, Dooley hit senior receiver Chris McGee in stride for a 41-yard touchdown connection.

Neal then scored three more touchdowns in the second half to remove any doubt about the outcome.

Lawrence will play host to Free State at 7 p.m. Friday for the final game of the regular season.