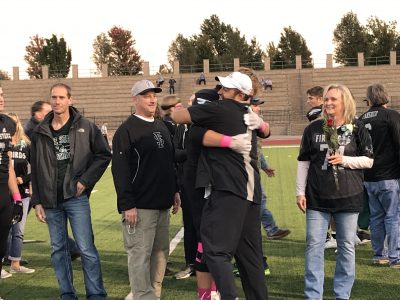 Just as Shawnee Mission East seemed to be getting back into the game, momentum swung once again in Free State’s favor, as Firebird junior running back Tyler Bowden broke off an explosive 80-yard touchdown down the left sideline.

The reliable legs of Bowden and Free State’s opportunistic defense led the Firebirds to a 41-14 victory over SM East on senior night.

“This game we really just played as a unit altogether, which is what we’ve been trying to do the whole season,” Free State senior quarterback Malik Berry said. “We just put two and two together, and it felt real good to come out with the (win).”

Free State’s senior class consists of 24 seniors that are a tight-knit group who has been playing with or against each other since the second grade.

“It’s a brotherhood you can’t break,” Berry said. “Before the game, I told the team, ‘Football’s the greatest sport ever. You build friendships that will never go away.’

“This senior class is real special to me.”

Free State coach Kevin Stewart said he’s been more than appreciative of how the group has worked hard for him during his first year.

“Coach (Bob) Lisher is obviously a legendary coach and I’m the new guy,” Stewart said. “So those guys, they could’ve rejected me. But they accepted me as the new coach and welcomed me in and worked really hard for me.”

After the seniors were recognized prior to kickoff, the Firebirds (6-1) were looking to make a statement.

However, the Lancers (2-5) rolled down the field to open things up, repeatedly handing off to senior running back Tony Friends. However, SM East senior quarterback Ryan Bolin ran for a first down but fumbled the ball on the Free State 21-yard line, which was recovered by the Firebirds.

“That first series they drove the ball on us a little bit, and that’s going to happen, but we came up with the big play there with the turnover and got right back (in the game),” Stewart said.

Free State initially was set back though, with multiple penalties that helped set up multiple third-and-long situations. However, Berry found senior wide receiver Marcus Preston for gains of 19 and 11 yards.

The Firebirds capped off the drive with a 5-yard touchdown from Bowden and took a 7-0 lead near the end of the first quarter.

SM East fumbled once again to start the second quarter, as a muffed snap landed with Free State. The Firebirds were unable to capitalize, but the next SM East possession resulted in a pick-six, as junior linebacker Gage Callaghan picked off a Bolin pass to take a 14-0 lead.

“The pick-six was huge, because we just went on a three-and-out on offense,” Stewart said. “That kind of put us ahead for good.”

A few minutes later, Bowden scampered for his second touchdown of the night with a 30-yard score down the left sideline. Free State was rolling to a 21-0 lead, with SM East looking to get back into the game.

And the Lancers did just that right before halftime as Bolin found senior wide receiver Tommy Foster for a 5-yard touchdown.

But the very next play was Bowden’s third touchdown as he exploded down the left sideline once again, this time for 80 yards.

“Right before half, we were really just trying to run the clock a little bit,” Stewart said. “He’s got breakaway speed, so once he hit it, I knew he was going to be gone.”

The Lancers attempted a field goal as the clock expired in the first half, but sophomore kicker Wade Paulus’ kick bounced off the left goal post.

With that miss, Free State took a 27-7 lead heading into the halftime break, firmly in control outside of a few costly penalties.

It was more of the same coming out of the break, as the Firebirds offense rolled down the field thanks to a 21-yard pass to senior wide receiver Tae Rainey and a pass interference penalty on SM East.

Bowden finished the drive with a 12-yard touchdown run — his fourth of the night — to extend the lead to 34-7.

Shortly after, Berry connected with Rainey for a 42-yard touchdown. Rainey was fairly open, but had to break a few tackles to eventually get into the end zone.

“When you have a great receiving corps like that, something’s bound to happen, someone’s bound to get open,” Berry said.

However, a snap got away from Berry and was recovered on the SM East 15-yard line by the Lancers. And SM East capitalized with a bit of trickery as Friends threw a touchdown pass to a wide open Bolin for a touchdown.

And SM East did manage to get back into the red zone, but Bolin was unable to convert a fourth-and-goal opportunity, giving the ball back to Free State.

The Firebirds did hold on, switching to senior quarterback Daniel Kufahl as the Free State offense ran out the clock to hold on for the win.

Now with the Firebirds sitting at 6-1, a big time matchup with 7-0 Lawrence High awaits next week.

“They’re the real deal,” Stewart said of LHS. “They’re well-coached and we’re going to have our hands full. It’s going to be a showdown it looks like.”

Free State will next take on crosstown rival Lawrence High in the City Showdown on Friday.