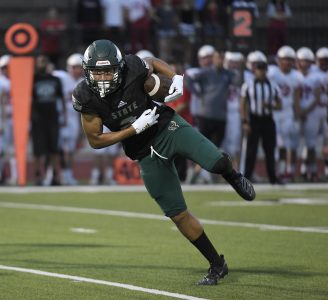 Free State senior receiver Marcus Preston pulls in a reception for a first down Friday against Shawnee Mission North on Sept. 20, 2019.

Free State senior Marcus Preston was running drills with his family. Jordan Preston, who is now a quarterback at KU, was throwing to his younger brother. The two had linked up multiple times at Mill Valley the year before.

The Preston brothers were perfecting their craft under the guidance of their father, Asheiki Preston, even though temperatures were already in the mid 90s at the time. Yet that has never deterred the Preston family.

“Someone is always putting in the work, so in order to keep up with them, I can’t take days off,” Preston said. “I know how much improvement I have made just by simply coming out to the field when there is nobody else out there, putting in the extra work when nobody is watching. I think that has definitely helped.”

But that mindset has fueled a strong start to Preston’s senior season with the Firebirds. Preston has 15 catches for 274 yards and two scores through five games, helping lead FSHS to a 4-1 record under first-year head coach Kevin Stewart.

The Firebirds have won three games in a row since suffering their first regular-season defeat in three years. Free State’s improved passing attack, led by the team’s leading receiver, has been a big key to this recent stretch.

Preston caught six passes for 85 yards in a lopsided win over Shawnee Mission North three weeks ago. He has 100 more yards than any other receiver on the team. Preston is one of two receivers with double-digit catches along with Tae Rainey, who has 13 grabs on the season.

Still, as has been the case for much of his playing career, Preston is not satisfied with his play thus far.

“I would say my season has gone OK,” Preston said. “I’ve done some good things here and there, but I have some things I can improve on.”

That level of commitment is a reason why Preston is capable of playing at the next level.

Preston received his first Division I offer from the University of North Dakota on July 30, and he has continued to garner collegiate attention ever since. The 6-foot-2, 185-pound receiver has the speed and route-running ability to continue his playing career past high school. His work ethic is simply the icing on the cake.

“He’s probably the hardest worker on our team,” Stewart said. “He’s very competitive, he doesn’t just settle even on plays where he’s not getting the ball. I’m very impressed with his work ethic and his competitive attitude.” 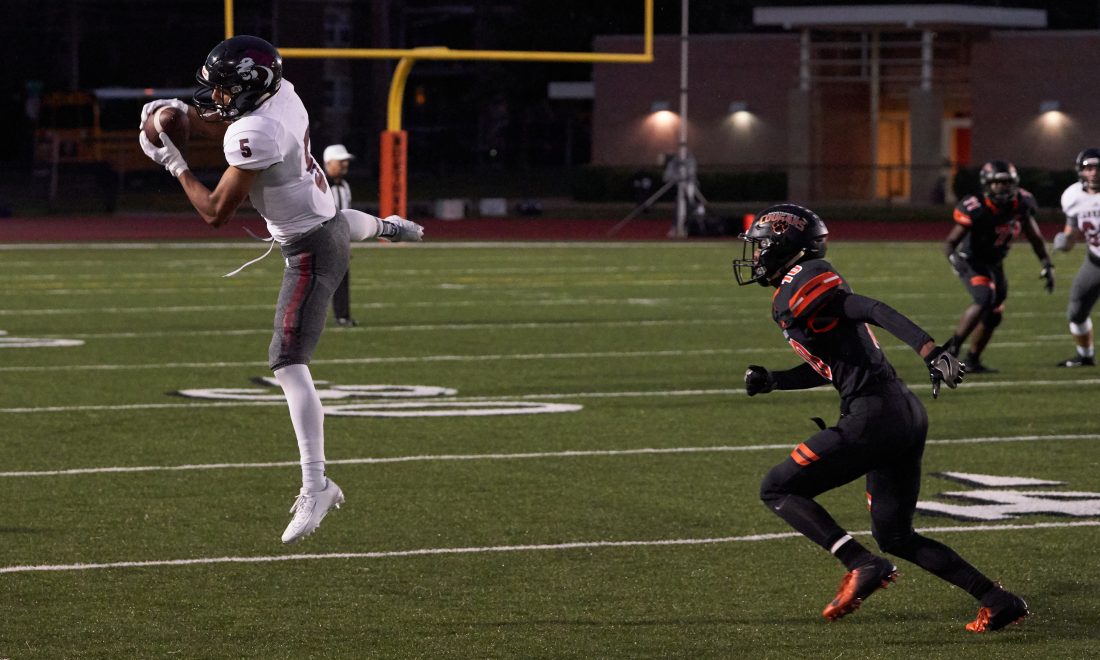 Lawrence High senior receiver Chris McGee has the look of a proven veteran on a weekly basis. McGee is constantly making plays for the Lions, who are 5-0 to start the season after going just 1-8 in 2018.

McGee always seems to come down with the crucial catch, and has the ability to snatch any ball thrown in his direction. He’s also a brilliant blocker, especially with how quickly he can converge to a blocker on run-pass-option plays.

“I thought at the end of last year he was one of the best receivers around,” LHS head coach Steve Rampy said. “He’s as good of a route runner as I’ve had at the high school level. He really understands routes. He’s extremely intelligent in the classroom as well.”

But the thing is, McGee is still relatively new to the position. He’s just that gifted of a player.

McGee has been playing football since he was in the fifth grade, though he played the quarterback position. It wasn’t until his sophomore year that McGee was encouraged to switch positions.

As a sophomore, McGee got some action at the varsity level before becoming the team’s go-to guy as a junior last fall. He has since carried that momentum over to his final campaign with the Lions, who are undefeated through five weeks for the first time since 2015.

“You have to get used to not having the ball in your hands every play,” McGee said of the position change. “There is a lot to like about receiver. I love catching the ball.”

McGee was determined to make the most of his final season with Lawrence, so he focused on a few specific facets of his game this offseason.

The 6-foot, 172-pound receiver put an emphasis on getting stronger this summer to help his downfield blocking and beating press coverage. McGee worked on his route running as well, hoping to create even more separation from defenders.

McGee has caught at least four balls in each of his five games this season. He has 27 catches for 413 yards on the year. In last week’s win against Shawnee Mission Northwest, McGee netted eight receptions for 146 yards.

“Once you tell him something, you don’t have to repeat it,” Rampy said. “He’s a good player, and we are lucky to have him.”

Free State’s girls golf team took home a second-place finish in the final leg of the Sunflower League, which was at Sycamore Ridge Golf Course on Wednesday.

The Firebirds shot 348 as a team, trailing only Shawnee Mission East’s score of 312. Lawrence High finished ninth out of many teams, shooting a team score of 439 in the event.

Free State’s Addyson Meadows led the way with a fourth-place finish with a score of 79. Claire Covert shot 86, which was good enough for 10th place. Kennedy Birk came in 13th with an 88 on the day. Kari Rainbolt placed 21st with a 95, while Kate Lawrence took 27th with a 99.

Rylie Hayden led the Lions by taking 30th overall with a 101. Free State took third as a team in the Sunflower League after the three legs. Meadows earned a second-team selection, while Birk and Covert both received honorable mention honors.

Just two days after the City Showdown, both Free State and Lawrence High volleyball were back in action on Thursday.

Free State followed up its win over a crosstown foe with a 3-1 victory (25-13, 25-21, 25-13, 27-25) at Olathe South. FSHS only lost the second set, but bounced back to win the final two sets in the league affair. The Firebirds were ranked No. 10 in Class 6A in this week’s updated polls by the Kansas Volleyball Association.

Lawrence fell to a tough Gardner Edgerton team in straight sets on its senior night. The Lions lost the first two sets by a score of 25-22 and 25-9, but battled in the final set before ultimately dropping a 26-24 decision.

There is no time to rest in the Sunflower League.

Just two days after losing to the top team in the league, Free State welcomed Shawnee Mission East on a chilly Thursday evening. The Lancers scored their lone goal on a penalty kick with 34:30 left in the match to hand the Firebirds a 1-0 defeat.