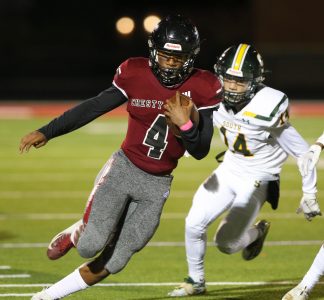 Lawrence High running back Devin Neal takes off up the sideline past Shawnee Mission South defensive back Uriah James on his way to a touchdown during the first quarter on Friday, Oct. 11, 2019 at Lawrence High School.

That catch and run tied the game and gave LHS much-needed momentum in a 40-21 come- from-behind victory over Shawnee Mission South Friday night.

“I’m proud of the way we battled,” LHS head coach Steve Rampy said. “We didn’t come out to play very well in the first quarter. We talked this summer about playing with great heart and great passion all the time.

“We didn’t have that early, and then we found it and played the last three quarters pretty well.”

LHS, coming into the night 5-0 on the season, was put on its heels early as the SM South methodically drove down the field on its opening drive. Will Huggins, who is a KU commit, caught a 33-yard pass from junior quarterback Max Close to set up the Raiders inside the 5-yard line, and junior running back Erik Smith punched it in for a 2-yard touchdown.

“The defense is really, really good,” Rampy said. “That’s why it’s so frustrating for (SM South) on the opening drive to go boom, boom, boom against our defense. That’s not them being ready to play.”

And the Raiders added on shortly after, as SM South blocked the next LHS punt. Huggins was once again in the right place at the right time, scooping and scoring his first touchdown of the night.

Trailing 14-0 midway through the first quarter, LHS junior running back Devin Neal responded as he has all season with a 51-yard touchdown run down the right sideline.

And after cutting the deficit in half, LHS seemed to grab a bit of momentum. The defense forced multiple three-and-outs and junior safety Corban Oberzan picked off one of Close’s passes in the end zone.

“He’s the steadying force there in the back,” Rampy said of Oberzan. “That’s why we moved him to safety this year, because he keeps making plays.”

On the offensive side, a bit of trickery transpired as a double reverse between Neal and Jackson resulted in a 31-yard touchdown to junior wide receiver Ben King. However, the play was called back for an illegal man downfield.

Dooley did find Jackson across the middle with just over five minutes before halftime for a 70-yard touchdown catch and run, though, to tie the game up 14-14.

And while the Lions looked like they may start to take control of the game, penalties and more misfortune took over instead. LHS blocked a SM South punt on the Raiders’ 20-yard line, but were unable to score.

Later, Dooley threw an interception with under 20 seconds left to set up a SM South touchdown to Huggins just before halftime.

However, after coach Steve Rampy made the team run at halftime, the Lions looked like a team on a mission as they easily drove down the length of the field. Neal capped the drive with an 8-yard touchdown run, but a muffed snap led to a missed extra point attempt.

Later, the Lions finally took the lead off another big play on offense over the middle, with Dooley finding the sure-handed senior wide receiver Chris McGee for a 76-yard touchdown. LHS went for 2, but was unable to convert.

Regardless, Lawrence held on for a 26-21 lead at the end of the third quarter.

Dooley and McGee connected again in the fourth quarter, with McGee hauling in catches of 36 and 30 yards, the second of which was for his second touchdown of the night.

McGee finished with seven catches for 203 receiving yards, something that didn’t surprise Rampy because “he’s capable of doing that.” Dooley — who Rampy said was the “real star” on offense — finished 14-of-34 for 349 yards and one interception.

Neal added another touchdown late — this time from just 1 yard out — and Oberzan snagged another interception to clinch the win for the Lions and improving LHS’ record to 6-0.

“We’ve got to get ready for the rest of our season,” Rampy said. “Olathe North’s a good team and it’s going to take everything that we have. We can’t make as many mistakes as we made tonight, and we know that.”

LHS will travel to Olathe North at 7 p.m. Friday.