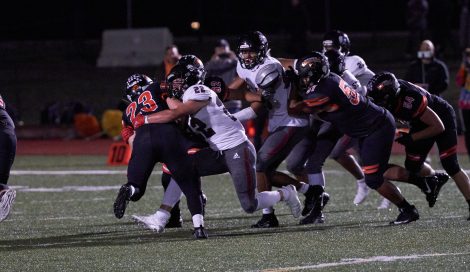 Lawrence High head coach Steve Rampy woke up at 4 a.m. Friday morning to watch some more game film of Shawnee Mission Northwest in preparation for a Week 5 showdown between a pair of undefeated teams.

It was then that Rampy really understood the challenge that his defense was about to face. Lawrence’s defense stepped up, though, holding Shawnee Mission Northwest’s high-octane offense to just one touchdown in the first 43 minutes of the night.

In the end, a dominant effort by the defense fueled LHS to a 51-20 victory over Shawnee Mission West Friday night at Shawnee Mission North. The Lions, who are the No. 3 team in Class 6A, improved to 5-0 by toppling what was the last undefeated team in 6A East.

“They took a really good offense and took their will to play away,” Rampy said. “I thought we’d win, but we just took everything away. We just had such a complete defensive game. It was awesome.”

Much was rightfully made about Shawnee Mission Northwest’s offense, particularly its passing attack behind junior quarterback Ty Black. Entering Week 5, the Cougars were averaging 47 points per game. Black had 1,210 yards and 12 scores in his first four games, while receiver Ty Lindeman had already piled up 727 yards on 35 catches in the first four weeks.

But the Lions took all of that chatter personally, especially considering the fact that they were only giving up 21 points per game prior to their most-recent matchup.

And Lawrence posted its most-complete defensive performance to date when the team needed it the most. Black did not throw a single passing touchdown, completing 15 of his 34 pass attempts for 125 yards in the loss.

Shawnee Mission Northwest actually only scored on a 90-yard kickoff return and a quarterback sneak for the first three-plus quarters. Chitama deflected pass in the end zone on fourth down of a 14-play drive in the second period, which spoiled Shawnee Mission West’s best chance at gaining momentum.

Chitama also blocked a point-after-attempt following the sneak by Black, ensuring the Lions were in the lead for the duration of the contest.

“As a team, we really did some good things out there,” Chitama said. “I’m just trying to show the world what we can do.”

It was an impressive showing by multiple players on the defensive side of the ball. Karson Green, Dylan Gillespie, Cole Morris and Cole Mondi provided plenty of pressure on the opposing quarterback.

Chitama, Deshon Lewis, Dre Bridges, Chaska Cloud and Corban Oberzan made multiple plays in the secondary as well. Cloud tallied an interception, while Austin Hollins blocked a punt for the Lions.

“We just battled with them. They are a big-play team,” Rampy said. “Really give credit to our defensive coaches. They did a great job.”

On the other side of the ball, LHS looked like one of the premier offenses in the state during the lopsided win.

Junior quarterback Jackson Dooley went 15-for-27 for 323 yards and three touchdowns in his best performance of the season. Senior receiver Chris McGee served as his top receiver, finishing with eight catches for 146 yards and a score. Lewis, Devin Neal and Ben King were involved in the passing game as well.

Neal scored five times (three rushing, two receiving) in the win for the Lions. Neal scored four times on plays of at least 45 yards, including a 45-yard reception to cap off a five-drive by LHS to close out the first half with a 28-13 advantage.

“When he breaks to the second level, you know he has a chance to go all the way,” Dooley said. “Most of the time he does.”

Dooley wasn’t even sacked once thanks to strong protection from Noah Smith, Acen Villegas, Porter Dannevik, Lane Luna and Drew Meyer on the offensive line. So it is safe to say it was an all-around performance by the Lions in their fifth win in as many weeks.

Still, as has been the case after the previous four victory, LHS is still not satisfied following last year’s 1-8 campaign. Even amid the postgame celebration, players were already thinking about a Week 6 matchup with Shawnee Mission South (2-3) at LHS.