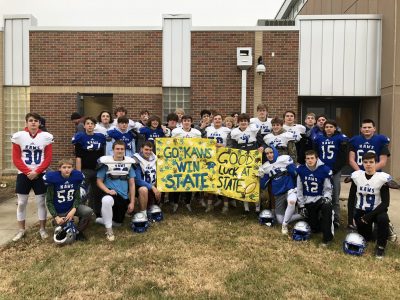 Perry-Lecompton poses with some posters, which were made by preschoolers, following Tuesday's practice at PLHS on Nov. 26, 2019. The Kaws are playing in the state championship game Saturday afternoon for the first time since 2008.

Perry-Lecompton junior Dawson Williams has been stopped by everybody within the community this week.

Ever since Perry-Lecompton defeated Hayden in the semifinals, that has been the case for a lot of players. The community is buzzing with excitement, as the Kaws are playing in the state championship game in football for the first time since 2008.

“It’s been pretty cool just knowing that the community has your back,” Williams said. “Seeing the community come together like this, it doesn’t happen very often. It is just a cool thing to see.”

Junior Hayden Robb has noticed an added excitement around the football team when he scrolls through social media.

“I’ve been scrolling through Facebook and it has been nothing but everybody going crazy,” Robb said. “I really love it. It really makes me happy on the inside, just knowing everyone is behind us.”

There are blue ribbons on display throughout the town as a symbol of support for the Kaws this week. But perhaps the best part of the week happened on Tuesday night, when the Perry-Lecompton football team finished up practice.

Players received posters, which were made by preschoolers, after practice. Some of the mothers of the players also created posters to show their support. All of those posters have been on display in the hallway just outside the football locker room ever since.

“It means that they all care about us,” Robb said. “They all want us to do well, and it gives me something to work harder for.”

The Perry-Lecompton football team will get to see proof of its community’s support every day before it heads to Hutchinson on Saturday morning. For many of the players, it meant a great deal after the team started the year with one win through the first three weeks.

“The whole thing has been brand new to all of them,” PLHS head coach Mike Paramore said. “You want to stop and take a look around and look at all the community support. These guys are in a special situation — take advantage of it. It is tough to get there, and it is hard to win.”

For most of this football team, players have been dreaming of this moment ever since they were playing youth football together about 10 years ago. Still, this week has been different from any other game week for the Kaws.

Perry-Lecompton got an extra practice with the game being played a day later. PLHS even practiced at Washburn University on Wednesday to get some experience on a turf field before the team plays at Hutchinson Community College.

The team will take a charter bus down to Hutchinson on Saturday morning following a team breakfast, and they will try to get there approximately two hours before kickoff like any other game day.

And if the Kaws are able capture their first-ever state title, the community will be buzzing even more when the team comes back this weekend.

“It would be a big deal,” Williams said. “Everybody in the community would be very excited, probably (have) a parade.”

For the 36th consecutive semester, the University of Kansas swimming and diving program was selected to the College ...