Quick recap: No. 3 Kansas falls to No. 4 Duke in Champions Classic 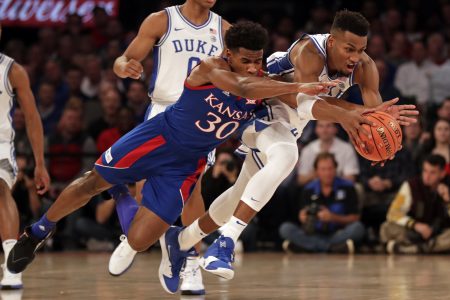 It only made sense that it came down to the final minutes.

In the end, No. 4 Duke made enough plays down the stretch to secure a 68-66 win over No. 3 Kansas Tuesday night in Madison Square Garden during the first game of the 2019-20 season. The loss snapped the Jayhawks’ three-game win streak in the Champions Classic, which included a narrow victory over Duke on a game-winning shot by Frank Mason in 2016.

Duke took a 64-61 lead with 1:33 left in the game on a pull-up jumper by Tre Jones, which got a friendly bounce. The Jayhawks responded with strong left-handed drive by Marcus Garrett to make it a 1-point game.

The Blue Devils then hit a pair of free throws after an errant pass by David McCormack, which was KU’s 28th turnover of the night. Ultimately, the Jayhawks missed multiple layup attempts on the ensuing possession to effectively end their chances.

• The game turned when: When Duke was able to respond to a decisive stretch by Kansas early in the second half.

After trailing by a 33-30 margin at the intermission, the Jayhawks responded by scoring 13 unanswered points to begin the second half. Garrett started things off with a strong drive and Ochai Agbaji was gifted a dunk on a backdoor cut.

McCormack scored on a bucket in the post, while Udoka Azubuike was on the receiving end of an alley-oop from Garrett. Agbaji then drilled a 3-pointer and scored on a transition play to give Kansas an 8-point advantage early in the second half.

The Blue Devils never wavered, though, and found a way to reclaim the advantage later in the half.

• Offensive highlight: It didn’t take long to get our first Bill Self special of the season.

Kansas scored its first points of the 2019-20 campaign on a nice set play to take a 2-0 lead over Duke. With 19:20 left in the first half, Dotson brought the ball up the court and hit Azubuike on the elbow.

As soon as Azubuike caught the ball on the elbow, Agbaji cut toward the rim from the wing. Azubuike hit Agbaji in stride, as he finished off the sequence with an easy slam. As noted by this tweet, however, it is not the first time that Self has turned to this play in the Champions Classic.

Blind pig backdoor set that Kansas scored the first basket of the game on. Not the first time they scored on it in the Champions Classic: pic.twitter.com/12VOnKZ6AR

Kansas ran the same exact play early in the second half, trimming the deficit to just one point at the time.

• Defensive highlight: McCormack got the start in the season opener, and he notched an impressive defensive play in the first half.

Midway through the first half, Duke guard Wendell Moore Jr. attacked the rim in transition. McCormack managed to hold his ground, and met Moore at the rim. Despite receiving some contact from Moore, McCormack ended up blocking the shot attempt to keep the Blue Devils from getting an easy bucket.

For comparison, McCormack swatted 13 total shots in 34 games as a freshman last year.

• Key stat: The Jayhawks were fortunate to only be down three points at halftime.

Kansas coughed up 18 turnovers in the first half alone, which led to a 33-30 deficit at the intermission. The Jayhawks went 10-for-21 from the floor in the first 20 minutes, but were unable to get much of a rhythm offense due to their 18 turnovers.

“We were awful,” Self told Holly Rowe during his halftime interview on ESPN. “We had poor guard play, we had poor big play. We weren’t very good.”

KU finished with 28 turnovers in the season opener.

• Up next: Kansas will play host to UNC Greensboro at 8 p.m. Friday.