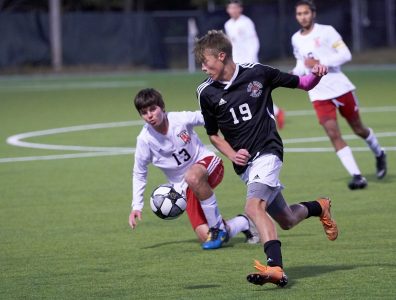 Free State's Jacob Appleman (19) takes the ball from Lawrence High's Joseph Hawker (13) in the first half during a match Tuesday night at FSHS on Oct. 15, 2019.

When Hussam Mohammed took over the Free State boys soccer program this past summer, he had a meeting with the parents of the players.

At the meeting, parents showed Mohammed plenty of photos of his soon-to-be senior class from when many of them played on the same club team eight years ago. That’s when Mohammed really knew he was in for a special first season as head coach of the Firebirds.

“That chemistry has been there for almost 10 years, and it has really helped us go this far,” Mohammed said. “If you have the right chemistry as a team, it makes my job as a coach easier.”

That has been evident during Free State’s run to the Class 6A quarterfinals, which marks the first time in 10 years that the boys soccer program has advanced this far in the postseason. FSHS (10-6-2) will travel to top-seeded Wichita East (17-1) at 3 p.m. Tuesday with a state berth on the line.

In a lot of ways, though, Free State’s impressive run has been many years in the making. Many of these 11 seniors have not only been playing soccer together all their lives, but they showcased what they could do on the same field as freshmen.

Free State’s C team went undefeated in 2016, which featured many members of this year’s senior class.

So while winning double-digit games and capturing a regional title are monumental feats, both accomplishments were always the goal entering the 2019 season. And that’s a credit to the success the group has had on the soccer field at all different levels.

“We just knew when it came our turn to be on varsity and be seniors, we were a special group,” Robinson said. “We have a really strong bond that helps us play comfortable. We all really know our role, and we rely on each other to fulfill that role.”

It remains to be seen if the seniors can make the most of their final week of their high school soccer careers.

Wichita East, which is the top seed in the 6A West, has won 17 matches in a row since falling to Dodge City in the season opener. The Blue Aces have allowed only 17 scores all year, while scoring 77 total goals.

In regionals, Wichita East recorded a 6-1 win over Wichita South and a 2-1 victory over Manhattan to earn a spot in the quarterfinals.

“We have nothing to lose now,” Herschell said. “I think the pressure is off going against a really good team. So we just have to play our best and see what happens.”

It isn’t the first time this postseason that the Firebirds are trying to play spoiler. FSHS, which was originally the 10th seed in the 6A West, secured a 3-1 win over No. 7 Liberal in the opening round.

Free State then claimed a regional title by winning in penalty kicks against Lawrence High, a team that knocked off the No. 2 overall seed in the 6A West in the opening round.

“We have nothing to lose and this is what we have been waiting for,” Robinson said. “We just (need to) play our hardest and play the way we always do and we will be satisfied with how we come out of the game.”

The winner Tuesday will advance to the Class 6A state tournament, which will take place at Hummer Sports Complex in Topeka this weekend.

The Eudora boys soccer team is also one win away from a state berth.

Eudora will host Heritage Christian Academy at 6 p.m. Tuesday in the Class 4A-1A East quarterfinal. EHS is 12-5-1 after earning a 10-0 victory over Columbus in the opening round and a 2-1 triple overtime victory over Paola in the regional title game.

Eudora was handed a 3-2 road loss in the regular-season meeting at Heritage Christian Academy on Oct. 14.

Sara Roszak, who doesn’t graduate until 2021, has already made her collegiate plans known. This past weekend, Roszak verbally committed to play softball at the University of Kansas via her personal Twitter account.

Roszak is coming off a sensational sophomore season for Free State’s softball team. She made a number of plays from her shortstop position, while recording a .447 batting average for the Firebirds. Roszak recorded 34 RBIs on 34 hits, finishing with eight doubles and five homers. 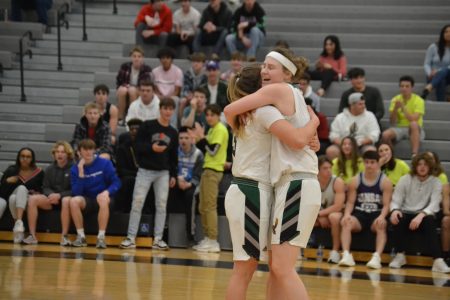