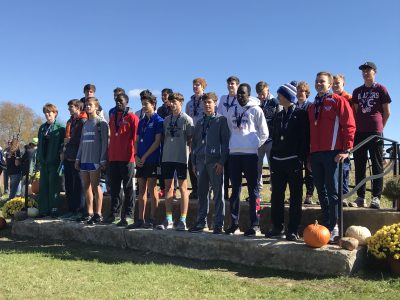 As Free State senior Charlie Johnson hit the skyline portion of the course at Rim Rock Farm, he heard the familiar call in his head of former Kansas runner Billy Mills’ victory in the 1964 Olympic games.

“I hear, ‘Look at Mills! Look at Mills!'” Johnson said. “I always think of that (near the finish), so that’s when I start going.”

Johnson finished fourth (16:00) in the Class 6A boys state cross-country championship race Saturday, leading the way to a fifth place team finish for the Firebirds. The team was shooting for a potential state title, though, which left the Firebirds slightly disappointed.

But Johnson said those lofty expectations are tough for a young team with just two seniors.

“That’s a lot of pressure to put on anyone,” Johnson said. “But overall, I guess I’m satisfied with my own race and I’m so glad I got to run with these boys.”

The Class 6A boys race started out quick, led by Lawrence High senior Ruben Little Head, who led the race through the first 800 meters.

“I felt like I could jump out and if I had a good pace, I could at least roll with it,” Little Head said. “I know over there (in the middle) I had a hiccup around those corners, and it kind of messed with my head. But I felt like I (ran) strong those last two miles.”

“For us, (the mindset was to) just compete,” Ryan said. “So we worked together, and I think we did pretty well.”

While Little Head shot to the front right away, Ryan took the first mile a little slower. He waited until the skyline to make his final move, even though he was gassed near the end.

“I was so tired,” Ryan said. “My legs were hurting, I felt like I was going to puke. But I think it’s all mental, so I just kicked it.”

For Johnson, he didn’t feel he went out fast enough to start the race and said he should’ve stuck with Wichita North senior Michael Iyali (3rd, 15:58). However, he still finished in the top five, making the most of a strong close to the race.

“I knew that I could catch some people at the last 800, so I just needed to stick with that front group at least,” Johnson said.

With the state meet signaling the end of the season — and for Johnson and Little Head, their high school cross-country careers — emotions ran high after the race.

“It was my last race,” Little Head said. “It’s breathtaking, a little emotional. It was fun.”

“Even though we didn’t end up winning (state) this year, it’s a community that I wouldn’t trade for the world,” Johnson said. “I love these guys. It’s been one hell of an experience, I’d say.”

For Ryan, the state meet served as another huge confidence boost for his last two years at LHS.

“Probably the biggest (takeaway) is that I can compete with that top group,” Ryan said. “Last year I was really nervous, and this year I just felt a lot more comfortable going into all the races.”

A stressful week filled with school deadlines didn’t give Free State senior Erin Fagan much time to rest before the Class 6A girls race.

“I’ve been really stressed out this past week, so I was like, ‘Whatever happens, happens,'” Fagan said. “State I always view as, not like a last hurrah, but it’s like the end. We’ve made it here and it’s just however we perform, it’ll be ok.”

That strategy seemed to work, as Fagan set a new personal record, finishing in 26th place with a time of 19:55. It was her first time breaking the 20-minute barrier. She led the way for a seventh-place team finish for the Free State girls.

At the start of her race, Fagan said her legs felt strong and she actually went out faster than normal. Toward the end of the race, she thought she ran a slower time since her legs felt fatigued on the back stretch.

But a strong mentality and Free State cheering contingent at the finish kept Fagan in the race.

Looking back at a new personal best in her last race, Fagan said she’ll remember her teammates most fondly from her career at Free State.

“Just the importance of the team,” Fagan said. “This team I really love.”