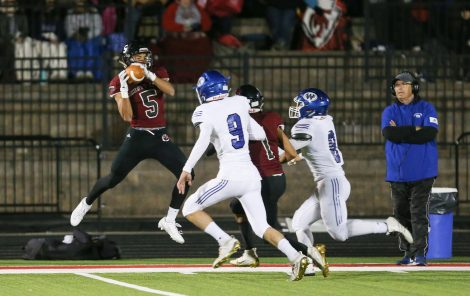 Lawrence High receiver Chris McGee pulls in a catch along the Washburn Rural sideline during the second quarter on Friday, Nov. 1, 2019 at Lawrence High School.

It was a simple response, but one that helped Lawrence High’s football team avoid a scare during a 38-21 win Friday night over Washburn Rural at LHS in the opening round of the Class 6A playoffs.

The Lions never wavered after the Junior Blues pulled within 10 points late in the third quarter, which is a sign of a team that can win multiple games in November. Lawrence was given a brief scare after roughing the punter, and giving up a long completion on fourth down, to help Washburn Rural pull within 10 points.

Rather than panic, though, the Lions (No. 6 seed in 6A West) kept it simple on their ensuing drive.

“We felt like we could score, they really never stopped us,” LHS head coach Steve Rampy said. “It was just a matter of us not stopping ourselves.”

Junior quarterback Jackson Dooley then went to the air, launching a ball toward the end zone. Senior receiver Chris McGee had to come back for the ball, snatching it over a Washburn Rural defensive back before getting into the end zone on a 23-yard touchdown connection.

“I felt like we had it after that,” McGee said. “I think we keep our head in the right place throughout adversity. When something bad happens, we just keep our heads up and go out and play.”

McGee was embraced by his LHS teammates on his way back toward the sideline before Connor Gellender drilled the point-after-attempt. It proved to be the signature score for the Lions, who are the sixth seed in the 6A West, and it meant that they were able to avoid any potential upset in a battle with No. 11 Washburn Rural in the first round.

The Lions (8-1) will now advance to the second round of the 6A playoffs after going 1-8 and losing to eventual state champion Derby in the opening round last season.

But moving on wasn’t always a guarantee for the Lions, who suffered a 31-30 defeat to Free State in the regular-season finale.

One possession later, Neal scored on a 14-yard touchdown run behind solid blocking from the offensive line of Noah Smith, Acen Villegas, Porter Dannevik, Lane Luna and Drew Meyer. The Lions never trailed from that moment on.

“We are just looking forward to going in tomorrow and cleaning up some things,” McGee said. “We had a lot of mental mistakes on offense. We need to get rid of that if we are going to get to where we are trying to go.”

It wasn’t always a smooth ride for LHS. Washburn Rural kept things interesting for two-and-half periods, though Lawrence’s defense made a number of plays to help notch the program’s first postseason victory since 2017.

Lawrence will travel to Topeka High for the second round of the Class 6A playoffs on Friday.

“We did some good things and we did some bad things,” Rampy said. “It was a good win.”