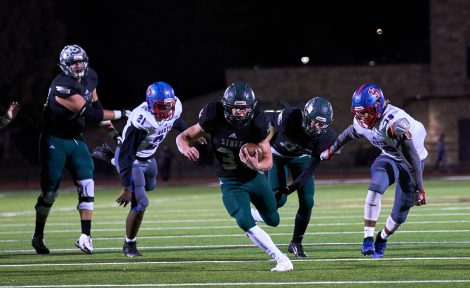 Free State Tyler Bowden (31) looks toward the endzone for a huge gain. The Firebirds defeated Wichita South 34-12 on Friday, Nov. 1.

It took just one quarter for Free State junior running back Tyler Bowden to break two school records and secure another multi-touchdown game.

“We came out and we knew what we needed to do,” Bowden said. “We just tried to get it done quick.”

Bowden’s explosive first quarter and Free State’s stifling defensive front pushed the Firebirds to a 34-12 victory over Wichita South in the first round of the Class 6A playoffs Friday night.

“It’s a team thing,” Free State coach Kevin Stewart said. “It’s an offensive line thing and it’s a Tyler thing, how hard they work together and their ability.”

Bowden said he’s proud of the accomplishment and is still wrapping his mind about being mentioned alongside former players like Jax Dineen.

“It’s just an honor,” Bowden said. “You say his name and it’s just crazy to be up there with a legend.”

And it didn’t take long for Bowden to get going, as the junior took off for a 74-yard touchdown on the first play from scrimmage. Just 17 seconds into the game, Free State already had a 7-0 lead.

“The o-line just opened some holes up and I just ran right through them,” Bowden said. “It was pretty effortless tonight.”

On the next drive — even with back-to-back false start penalties — it was more of the same for Free State as Bowden broke off a 37-yard run to put the Firebirds in the red zone. Sophomore quarterback Jet Dineen found senior wide receiver Marcus Preston for an 8-yard gain, and Bowden punched it in for a 1-yard touchdown.

Two minutes later, Bowden added his third touchdown of the night on a 20-yard burst up the middle.

On the other side, Wichita South sophomore quarterback TJ Neal was relentlessly pressured by the Free State defensive line. Senior linebacker Joey Eddis and senior defensive end Devon Buck broke into the backfield throughout the first half, even pressuring Neal into an interception to junior defensive back Ryley Wheat.

That interception by Wheat set up another Bowden touchdown, this time for 20 yards and breaking the single-season points record.

By the end of the first quarter, Bowden was done for the night with 176 yards on nine carries, four touchdowns and two school records.

Free State also added another touchdown at the beginning of the second quarter as Jet Dineen found Preston for a 55-yard touchdown. Preston also had an explosive first half with 140 yards on just four catches.

“Marcus is very talented and we all know that,” Stewart said. “He had some good catches there and a nice touchdown. He’s earned that with all his hard work.”

For Wichita South, Neal was able to connect with junior running back Jordan Huggins and senior wide receiver Daylon Harris for a few 20-plus yard gains. But a mix of pressured throws and penalties stalled the Titans’ offense.

So after a dominant first half, Free State held a 34-0 lead over Wichita South.

However, the Titans looked to be gaining some offensive rhythm after the break with Huggins and Neal. But the Free State defense came up big again with another interception, as senior cornerback Carnell Douglas picked off a Neal pass for the second turnover of the night.

Sophomore defensive back Grant Gregory also grabbed an interception right before the end of the third quarter on a lofted pass from Neal.

“We got a lot of young guys in in the second half, and I thought even the young guys played well,” Stewarts said. “The defense, they were flying around and tackling. It’s exciting to see those guys perform.”

“It’s always fun to see your future out there,” Bowden said. “Those are our guys next year and it will be fun to play with them.”

But the Titans were able to break through after a Firebird fumble at midfield. Neal found Daylon Harris for a 27-yard touchdown to get the Wichita South on the scoreboard.

Two minutes later, Huggins broke off a 49-yard touchdown run. Wichita South did go for 2-point conversion both scores, but neither attempt was successful.

While he was happy to get younger players reps, Stewart said he was a little frustrated with their performance.

“I expect them to be prepared and ready to go, so you get frustrated when they’re not ready to go,” Stewart said. “But that’s what happens when you put them up against a varsity team.”

The Firebirds managed to stop Wichita South’s rejuvenated offense as Free State forced a fumble from Neal, making another play to seal the win.

“We’ll have to just look at the film and try to improve all week,” Stewart said. “It’ll be a tough opponent next week, I know that.”

Free State moves on to a regional matchup against Manhattan on Friday.