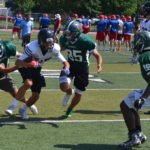 Free State players swarm to the ball during the Baker football camp Thursday, June 14, 2018, at LHS.

Stewart, who was introduced to the FSHS football team in January, has come to learn about how much pride his players take in the Lawrence community. So when members of the community volunteered to help clean up the damage from Tuesday’s mile-wide tornado, Stewart wasn’t shocked to discover that his players wanted to contribute.

“I think it really speaks volumes to the character of our kids,” Stewart said. “They showed up and worked hard in the morning. I’m sure they were tired, but they took it upon themselves to help the community out. I didn’t tell them that they had to do that. That was something they wanted to do.”

Elijah Harshaw, Baylor Bowen, Miles Collins, Jake Collins and Tai Newhouse were the FSHS players out there Wednesday afternoon. The Firebirds plan to help out at multiple locations this weekend as well.

“We talked about how grateful we were that everyone was safe,” Stewart said. “Really, they took it upon themselves. I was really happy with them. They did a lot of that.”

Likewise, Lawrence High’s football team has coordinated plans to clean up at multiple locations on Friday. The effort was organized by head coach Steve Rampy along with players and parents involved with the LHS football team.

“Just trying to help people get through some tough times,” Rampy said. “That is all we are trying to do.”

Despite having plans for later in the week, members of the LHS football team already were spotted volunteering Wednesday. A photo surfaced on Twitter of the Lions clearing up damage around town.