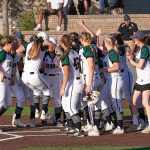 Free State Georgia Rea (5) jumps on home base after hitting a home run against Campus High School on May 16, 2019, at Free State High School.

Sophomore pitcher Tatum Clopton was named the Player of the Year for her prolific presence in the circle this season. She tossed five shutouts in as many games during the postseason, including all three outings of the Class 6A state tournament.

Free State’s Lee Ice was named the Coach of the Year after guiding his squad to a second consecutive state title. The Firebirds went 23-2 this season, which included 14 wins in a row to close out the 2019 campaign. FSHS freshman Macy Miles was named the Sunflower League Newcomer of the Year.

Lawrence High senior Angelina Harjo was named to the second team as an outfielder. Senior Abby Monroe (infielder) and freshman Chayse Burghart (catcher) were also selected to the second team for the Lions. Junior Karly Johnson, senior Sammy Williams and junior Kate Williams were all recognized on the honorable mention team.