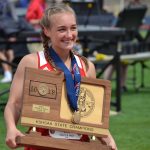 Lawrence High senior Josie Hickerson sets a goal and she accomplishes it.

When moving into a new house in August, just before the start of her senior year, Hickerson placed three sticky notes up on her bathroom mirror. It was three different goals she wanted to accomplish in her final campaign as a Lion, something she saw before going to school every day.

One sticky note read — Win vault at state gymnastics meet. Hickerson accomplished that on Oct. 20, as she flipped a Yurchenko Pike onto a hard surface for the first time in her high school career. Lawrence’s gymnastics team ended up with a runner-up finish at the state meet.

Hickerson had another individual goal on another sticky note, which was to win a state title in pole vault. She crossed that one off the list with a personal-best mark of 12-foot-3 Saturday afternoon at Wichita State’s Cessna Stadium. Hickerson had to wait another day to cross the last goal off her list, helping the LHS girls track team take home a state title.

“At all the pole vault events I have been at, we have lectures,” Hickerson said. “The lectures are all about affirmation. If you can tell yourself you can do it, and be confident, then (your goals) are easier to achieve.”

The Lions had a trio of event winners en route to their second consecutive straight crown. Hickerson was one of two individual champions, and it came just one week after claiming a runner-up finish at regionals.

Hickerson has been determined since the moment she stepped down from the second-place podium at last year’s state meet. The 2018 pole vault champion was a senior from Shawnee Mission Northwest, so Hickerson believed this spring would be her turn.

However, Hickerson didn’t take any chances. She put in the work in the offseason. Hickerson competed all week in the rain to prepare for bad weather, and wasn’t thrown off when her event slated for Friday was postponed to Saturday instead.

“Me and Kendra were both right there,” Hickerson said. “I knew going into it that it was going to be either one of us. It was whoever had the best day and whoever was mentally prepared to work for it.”

To top it off, Hickerson didn’t even get much of a warmup opportunity.

Due to the schedule change, both of Hickerson’s events were around the same time Saturday. After placing eighth in triple jump, Hickerson was forced to go to the podium while most of her competitors were warming up on the pole vault runway.

None of that seemed to hinder Hickerson during a back-and-forth battle with Wait. Hickerson cleared the 12-foot-0 mark on her third attempt. Even though Wait still had another attempt, Hickerson knew the significance of the clearance. Wait won the regional meet with an 11-6, a mark she ended up with at the state meet.

“I almost started crying, because it was a pretty unreal feeling,” Hickerson said.

Hickerson ended up with a winning-mark of 12-foot-3, which surpassed her previous best leap of 12-foot-0. It was a fitting way for Hickerson, who is the school-record holder in the event, to end her career at LHS before competing in pole vault at Washburn University next year.

“That was a pretty cool feeling,” Hickerson said. “Clearing it and seeing myself pass the bar was unreal.”